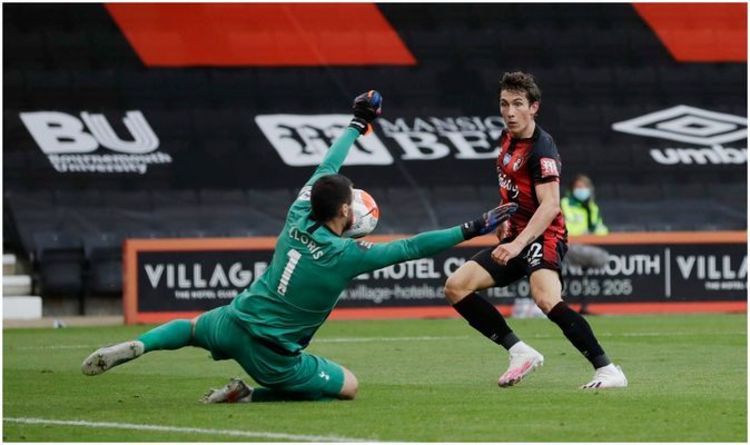 It is only the faintest little glimmer of hope – but it is something for Eddie Howe. A point, only one precious little point – but it could mean so much for Howe and his men. More important was the way his team suddenly found the spirit and fire that has been so missing from their game in this miserable post lockdown summer. Bournemouth still have four matches to play, and they are still three points off safety. But where once there was gloom, once there was despair – suddenly now there is hope.

Sure, had Harry Wilson when clean through in injury time kept his head and beaten Tottenham goalkeeper Hugo Lloris instead of allowing the Frenchman to save, Bournemouth could have registered that oh so precious win they so badly need. This point may not be enough – but it is something.

As for Tottenham, the less said the better. Not a shot on target in the entire match and barely a chance created. Jose Mourinho, who threw on all his stars in a vain bid to win the game, has an awful lot of work to do.

And, by the way, don’t bother introducing Mourinho to Michael Oliver any time soon. The Washington official was the VAR man at Sheffield United last Thursday when Spurs had Harry Kane goal disallowed for handball by Lucas Moura when it looked like the winger had clearly been tripped.

Then last night after just four minutes at the Vitality Stadium, Kane raced in to try to connect with a corner – and looked to be clearly shoved in the back by Josh King.

Referee Paul Tierney did not give what looked like an obvious penalty – and VAR also turned down Spurs’ furious claims as Mourinho on the touchline waved his arms in frustration – and guess who was the VAR official? Yep, Michael Oliver. Aggrieved? You bet.

This game though felt very much like the last chance saloon for Howe. It had been 159 days since Bournemouth won a game before last night.

The Cherries manager had once been linked with the Spurs job – along with many others. But this sorry season has been a trial for the 42 year old. Seventeen games out of 22 lost before last night, and oblivion looming.

But Howe was boosted by the return of top scorer Callum Wilson and a two game ban – and his team, shrugging off their early let off, began to play with belief.

Kane was forced to head away as the Cherries pressed, and though Erik Lamela drove over, it was Howe’s men who were the better side, Lloris having to turn Junior Stanislas’s shot around the post.

staronline@reachplc.com (Frank Warren) Josh Taylor faces a tough challenge tonight when he takes on tricky Thai foe Apinun Khongsong. He is not just dealing with the...
Read more
Sports

Emily Selleck Jonah Hill is practically unrecognizable after his 40-pound weight loss. The funnyman put his slimmed-down figure on display as he rocked a light...
Read more