Travel: Some of the world’s spookiest ghost towns revealed – would you dare to visit? 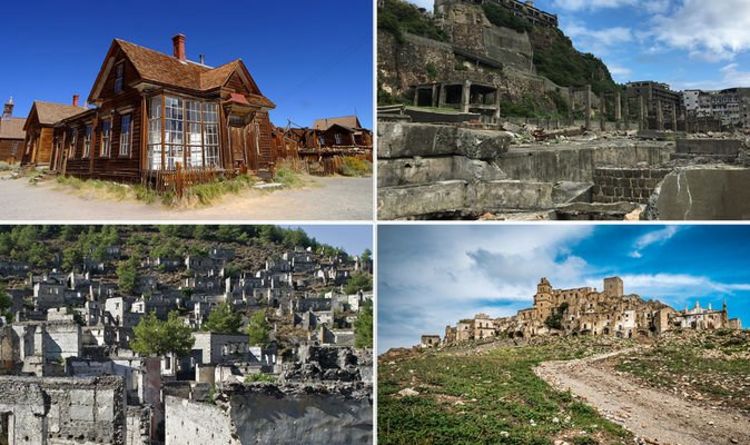 Coronavirus lockdown has people around the world confined to their homes in a bid to stop the spread of the deadly virus. This means that normally bustling metropolises have become barren and desolate, with some even reporting wildlife beginning to take over. However, there are other destinations where the lack of foot traffic is business as usual – actual ghost towns.

Nestled in the Bodie Hills east of the Sierra Nevada mountain range in Mono Country is the former gold-mining town of Bodie.

The 19th-century town is thought to have once been home to between 5,000 and 7,000 people, but now lays barren, with just abandoned tools and empty buildings to show for it. The town was left behind by residents during World War II when the US closed all gold mining towns. Sadly, mining never picked up after the war, leaving the town essentially useless.

By 1943, just three residents remained in the silent town, one of whom was a caretaker whose job was to keep vandals at bay.

The authentic Wild West ghost town has since been designated a National Historic Landmark, home to 170 of its original buildings. Visitors are welcome to walk the deserted streets and eye up the goods that were left behind.

This borough in Columbia Country, Pennsylvania is considered a near ghost-town. Though eerily quiet, some residents do remain in the abandoned municipality.

Once home to 1,000 residents, the borough saw its residents begin to flee in 1962 when its coal mines began to burn beneath the ground.

Though some residents hoped to stay, the burning coal mines spread around 8-miles 300 feet below the ground, and soon pushed more and more locals to up sticks and leave. Now just seven brave, indignant residents remain.

The cause of the fire remains unknown, but the town was described by David DeKok in his 1986 book Unseen Danger: A Tragedy of People, Government, and the Centralia Mine Fire as “a world where no human could live.”

So far, the Centralia mine fire has burned for over 50 years and is expected to burn for over 200 more.

Even before you hit the main town, smoke billows up through cracks in the forgotten highway.

Just eight kilometres south of the bustling tourist hotspot Fethiye, is Kayokay, a desolate town which is said to be rarely visited these days.

Once inhabited by around 10,000 people, this lost stone city, previously known as Levissi, was abandoned at the end of the Greco-Turkish War in 1923.

The population exchange in 1923, signed by both Turkish and Greece governments, meant that Muslims and Christians were exchanged between countries so each country could claim one major religion. As residents moved into their new, permanent homes, the city was abandoned due to its hillside locations.

Further devastation hit in 1957 when a large earthquake destroyed most of the town. Kayakoy was given museum status by the Turkish Ministry of Culture, with hundreds of rundown standing Greek-style houses and churches remaining along the mountainside.

Arguably one of the most famous ghost-towns in the world, Chernobyl became a ghost town when a devastating nuclear explosion from the Chernobyl power plant hit the city of Pripyat. The disaster rapidly deduced the city’s population from 50,000 to zero. It is considered the worst nuclear disaster in history.

Though the initial blast initially killed just two of the reactor operating staff, the spread of nuclear infection soon took over the town, causing all manner of health issues and between 9,000 to 16,000 exposure-related fatalities.

Visitors were initially banned from the area, with a “zone of alienation” spanning 30 kilometres in all directions around the city.

However, in 2011 Ukraine opened up the sealed zone around the Chernobyl reactor to tourists. As of 2016, 187 locals had returned and were living permanently in the zone.

Located 5km away from the city of Nagasaki lies the abandoned Hashima Island.

Surrounded by a sea wall and inhabited only by creatures, the island is a reminder of Japan’s rapid industrialisation.

Once home to around 5,250 inhabitants, as coal mining began to decline in the 1970s the city was soon left behind for nature to take over.

The island remained largely untouched until the 2000s when interest was soon sparked amongst tourists.

Certain exterior walls have since been restored and travel to the island was re-opened to eager tourists in 2009.

The island is now a UNESCO World Heritage Site.

ByData shows the second lockdown is having the desired effect, with the number of new cases per day dropping from 50,000 in early November,...
Read more
Travel