Trump accused of swearing at females astronauts after embarrassing him... 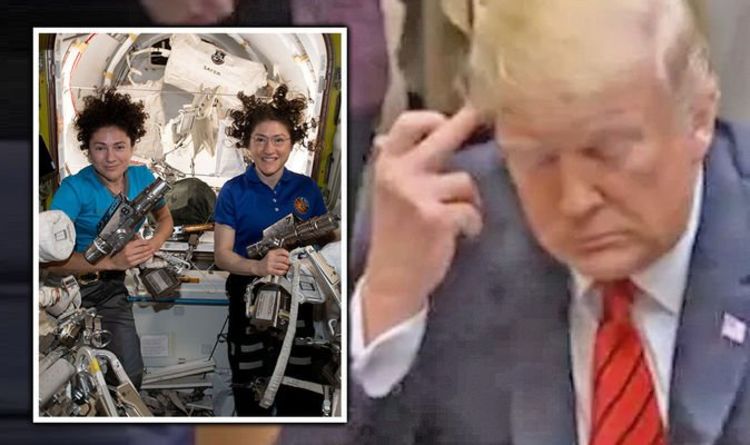 Speaking during a live call to the two astronauts, Jessica Meir and Christina Koch who were on the International Space Station, Trump rang to congratulate them for being the first two female astronauts to walk in space. Surrounded by officials and his daughter, Ivanka, Mr Trump said: “We’re thrilled to be speaking live with two brave American astronauts who are making history joining us during their spacewalk outside the International Space Station.

“And this is the first time for a woman outside of the space station.”

However, one of the astronauts corrected the President and stated they were not the first females to walk in space but rather that it was “the first time that there has been two women outside” at the same time.

As Ms Meir corrected the President, Trump scratched his forehead with his middle finger, which some on Twitter labelled as him swearing.

One user wrote: “He gives them the middle finger after they correct his erroneous remark. How presidential.”

Another commented: “Was Trump giving her the finger as she corrected him?”

Quickly, some users insisted that the President was swearing at whoever game him the incorrect information.

One user wrote: “Even better, he immediately looked to his right, then scratched his head with his middle finger.

“As if to say, you gave me wrong information.”

JUST IN: Trump impeachment: Bannon warns US president could be ousted in weeks

One user wrote: “I love the pause and Donald’s reaction.”

Ms Meir and Christina Koch became the first all-female crew to walk out to space without a male colleague in 35 years when they repaired a broken part of the power network on Friday.

“And golly, gee whiz, every now and then there’s more than one woman in the same place.”

Tracy Caldwell Dyson, another previous spacewalker, also revealed her hope that such an event would eventually become normalised.

NASA administrator, Jim Bridenstine who watched the event from the space agency’s headquarters in Virginia and was present with Trump, also labelled the pair an inspiration for what they had done.

He said: “We have the right people doing the right job at the right time.

“They are an inspiration to people all over the world including me.

“And we’re very excited to get this mission underway.”