Trump ad asks people to support the troops. But it uses a picture of Russian jets. 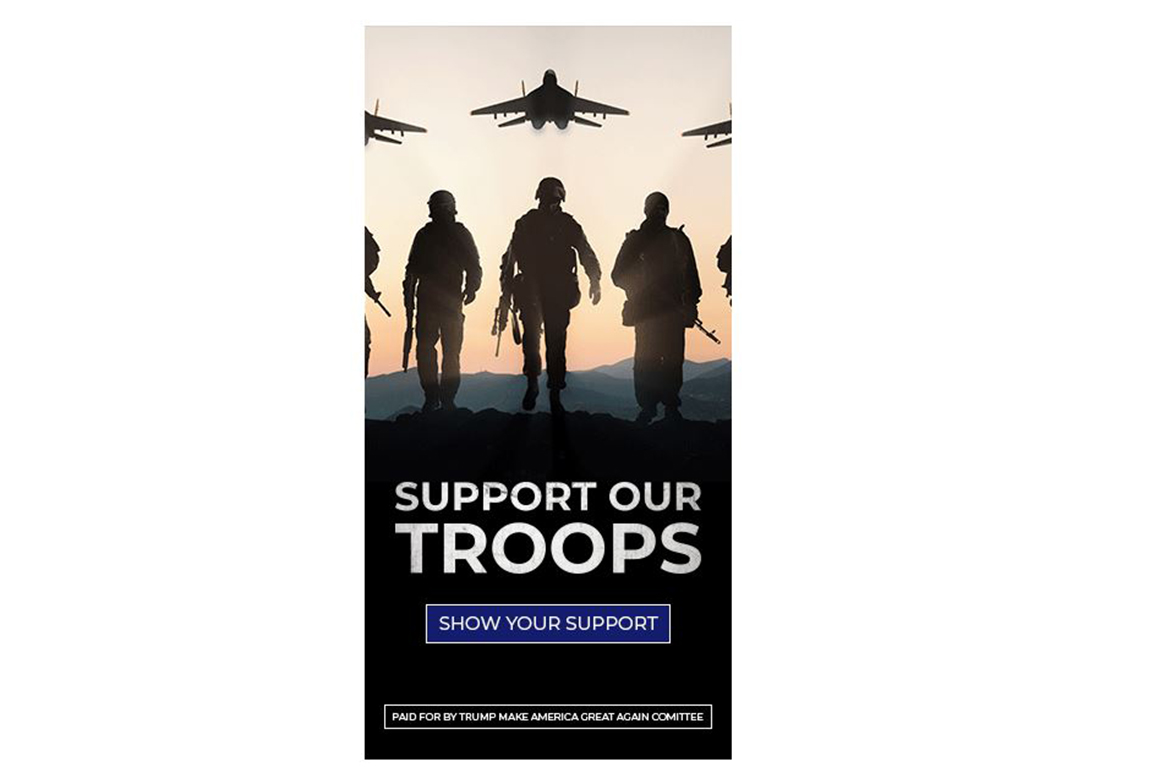 He noted the angle of the aircraft’s tail, the way the tail is swept far back, and the spacing of the engines, along with the tunnel between them.

Ruslan Pukhov, director of the Centre for Analysis of Strategies and Technologies in Moscow, confirmed that the planes are Russian MiG-29s, and also said the soldier on the far right in the ad carries an AK-74 assault rifle.

The Trump Make America Great Again Committee is run by both the Republican National Committee and the campaign. Most of the low-dollar and digital donations raised by the committee goes to the campaign.

The image in the ad is a stock photo available on Shutterstock.com with the title “Military silhouettes of soldiers and airforce against the backdrop of sunset sky.” The creator of the image, named “BPTU,” says they are based in Andorra, but did not respond to a Facebook message.

The MiG-29, a twin-engine fighter jet designed in the Soviet Union that first flew in 1977, is the Russians’ mainstay fighter jet and has been sold all over the world. It was developed during the Cold War specifically to counter American F-15 and F-16s, and the U.S. even obtained a few to play the adversary in war games. The planes have recently been spotted at a Russian air base in Syria and also Libya.

Russia has also exported them to a number of countries, including North Korea, Syria, India and Uzbekistan. Iran also acquired 68 of the MiG-29s at the end of the Soviet Union. In 1997, the U.S. even bought 21 “nuclear-capable” MiG-29 planes from Moldova to keep them from getting in the hands of adversaries such as Iran.

Politicians have gotten in trouble in the past for running ads or creating content that featured Russian or other countries’ military equipment. Last October, Rep. Brian Mast (R-Fla.) tweeted a picture of the Russian battlecruiser Pyotr Velikiy with the comment: “Happy birthday to the US Navy. To the men and women who serve to keep our waters safe, we thank you.” His office later took the tweet down.

Marc Caputo contributed to this report.

Interrupting, name-calling, rule-breaking. These educators have no time for that kind of mischief - especially when it's coming from presidential candidates. A kindergarten and preschool...
Read more

Rabbi Simon Jacobson, author of the best-selling book "Toward a Meaningful Life" and Founding Dean of the Meaningful Life Center, offers refreshing approaches to...
Read more

Sandra E. GarciaWHILE VACATIONING ONE summer in the late 1930s, Maude Terry decided to go fishing. On her way to Gardiners Bay in eastern...
Read more