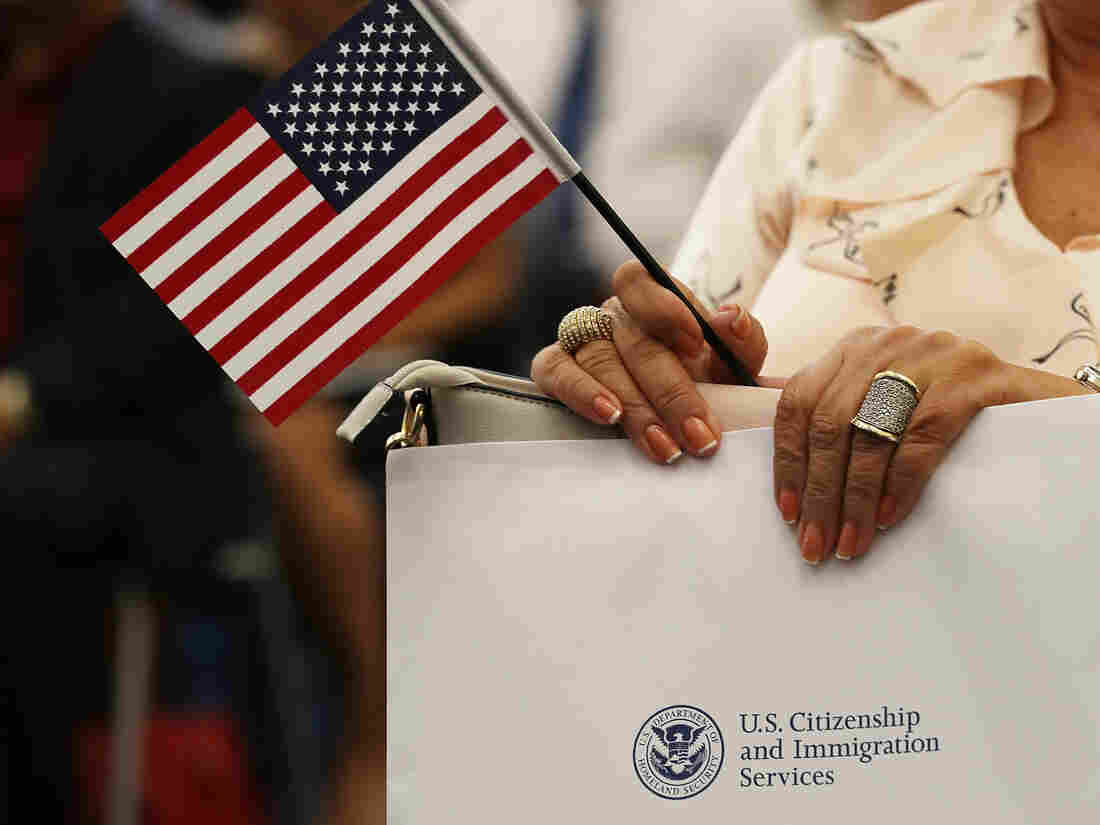 An attendee holds an American flag at a U.S. Citizenship & Immigration Services naturalization ceremony in Miami, Fla. in Aug. 2018. The Trump administration is considering expanding its collection of biometric data as part of the immigration process. Joe Raedle/Getty Images hide caption 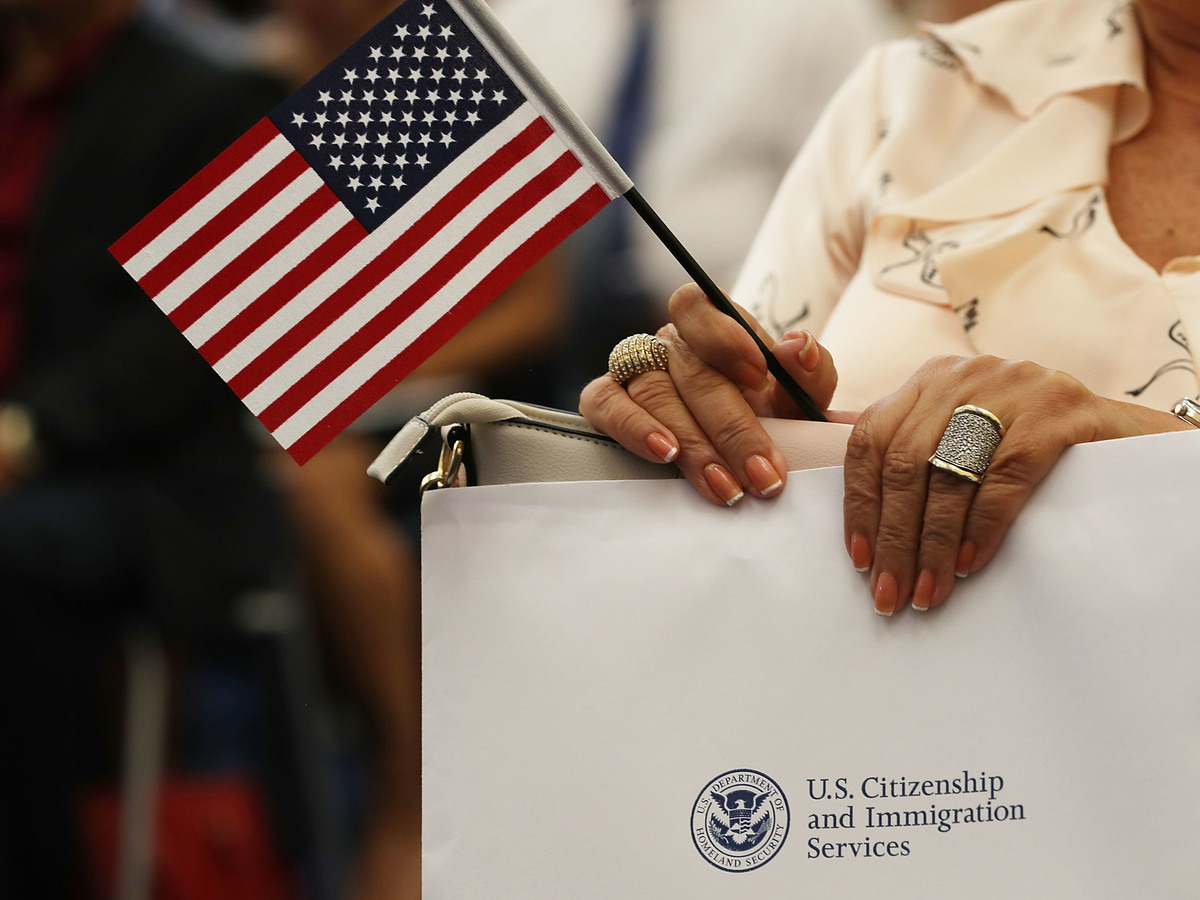 An attendee holds an American flag at a U.S. Citizenship & Immigration Services naturalization ceremony in Miami, Fla. in Aug. 2018. The Trump administration is considering expanding its collection of biometric data as part of the immigration process.

The Trump administration is considering drastically expanding the government’s collection of biometric information from immigrants seeking U.S. citizenship, the Department of Homeland Security confirmed on Tuesday.

The proposal would allow the government to demand more personal data, from more people, more often as part of the immigration application process.

U.S. Citizenship and Immigration Services currently requires biometrics, or biological measurements, from anyone over the age of 14 who applies for certain immigration benefits. That information is limited to fingerprints, photographs and signatures, but would be expanded under the proposed policy change to include DNA, eye scans, voice prints and photographs for facial recognition.

According to a draft policy obtained by BuzzFeed News, the government would be allowed to request biometrics from immigrants with green cards or work permits at any point until they become a U.S. citizen, in what amounts to continuous vetting.

BuzzFeed also reported that the policy would further modify existing procedures so that anyone who has received an immigration benefit, including their U.S. citizen sponsors, would need to provide biometrics unless told otherwise by USCIS. It would also do away with the age limit on the collection of such data, requiring even minors to comply.

DHS issued a statement on Tuesday confirming the “imminent publication of a Notice of Proposed Rulemaking.”

The department said the proposed change would improve its screening and vetting process, as well as reduce its dependence on paper documents to prove “identity and familial relationships.”

The proposed policy would also authorize the the collection of DNA to verify certain familial relationships. The department said confirming the genetic relationship between adults and minors in DHS custody is in the interest of protecting childrens’ well-being.

Ken Cuccinelli, who is performing the duties of the Deputy Secretary for Homeland Security, said in the statement that collecting biometric information protects against identity theft and “thwarts fraudsters who are not who they claim to be.”

“They’re implementing this as if there’s some sort of rampant fraud going through the immigration system, with very little evidence to show for it,” Pierce told NPR.

She said the new policy could subject millions of people to continued surveillance, and potentially have a chilling effect on family-based applications, because U.S. nationals and legal permanent residents may not be willing to go through invasive biometrics exams to sponsor relatives for a green card.

Individuals going through the immigration process also have to pay a fee when providing biometrics, Pierce said, noting that USCIS is struggling financially.

The American Civil Liberties Union condemned the draft regulation in a statement issued Tuesday, in which it said the Trump administration is “once again, trying to radically change America’s immigration system” by collecting unprecedented personal information and potentially storing it even after immigrants become citizens.

“Collecting a massive database of genetic blueprints won’t make us safer — it will simply make it easier for the government to surveil and target our communities and to bring us closer to a dystopian nightmare,” said Andrea Flores, ACLU’s deputy director of immigration policy.

Once the notice of proposed rulemaking is published in the Federal Register, members of the public will have an opportunity to comment on it.

Trump Casts New Doubt On Any Deal To Keep TikTok Alive In U.S.

Bobby AllynIcons for the smartphone apps TikTok and WeChat are seen on a smartphone screen in Beijing. President Trump said he does not plan...
Read more

Researchers from Australia found marine life is evolving into strange and sometimes monstrous new shapes and forms, unseen anywhere else on the planet. They...
Read more

And BTS music pack due in November.Developer Beat Games' acclaimed wand-waggling rhythm effort Beat Saber will be getting its long-awaited multiplayer mode next month, on...
Read more

Mr Cameron revealed he held the fort at home and spent a couple of days a week volunteering. He told Times Radio: "I was...
Read more