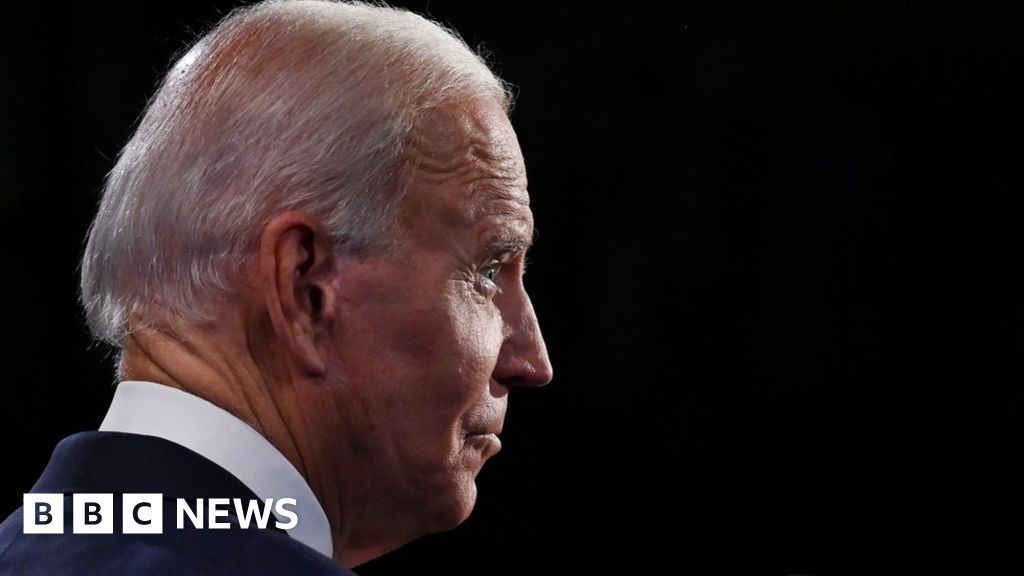 The adverts show the Democratic Party challenger with an earpiece, and say that he refused to have his ears checked for devices prior to the debate.

The Biden campaign rejected the claims.

The Trump campaign adverts ask: “Why won’t Sleepy Joe commit to an ear test?” and “Who is in Joe’s ear?”

Accusations that presidential candidates have received debate help via hidden hearing devices are familiar, albeit unproven. Such allegations have been levelled against both Republican and Democratic candidates in the past.

Prior to Tuesday’s debate, the rumour about Mr Biden’s supposed earpiece was circulating on several social networks, and was being promoted by the Trump campaign.

The advertising campaign was launched after the debate, and also promotes two other baseless but widely shared rumours about Mr Biden. One suggested he asked for breaks during the debate, and another accused him of refusing a “drug test”.

The photo featured in the advert is not from Tuesday’s debate. It was first shared online in September 2019.

In a number of the adverts, it has been doctored to show Mr Biden wearing wireless Apple headphones. This was not the case in the original image. Some versions circle the ear featuring the headphone.

By Wednesday evening, there were at least 15 different versions of the advert, and according to Facebook’s Ad Library, they had reached at least 10 million users.

Facebook has pledged to label posts containing voting misinformation and point users towards accurate information ahead of the election. However its policy does not involve fact-checking political speech, including in advertisements.

The company declined to comment about the latest Trump ad campaign.

Identical memes were pushed by a number of popular Facebook pages with names such as US Conservative and Unhinged Left. They claimed “Joe Biden should be inspected for a hidden earpiece as well as submit to a drug test before the debate”.

These memes are subject to fact-checks – and some have had warning labels applied to them on Facebook.

picked up by Fox News and other conservative news outlets.

They were further amplified by supporters of QAnon, an unfounded a conspiracy theory that claims President Trump is fighting a secret war against elite Satan-worshipping paedophiles.

Those who believe in QAnon are known for promoting political disinformation on social media which targets opponents of the president. They shared close-up pictures of Mr Biden’s ears, alleging a listening device was visible.

During the debate, some also shared photos of a fold in Mr Biden’s shirt, claiming it was caused by a wire, and of a supposed device on his wrist, where he wears a rosary in memory of his late son Beau.

Conspiracy theories about secret listening devices have been recycled in presidential election campaigns for the past two decades.

In 2004, rumours circulated among left-wing sites and blogs that President George W Bush was being aided by a secret earpiece.

None of those allegations were found to be true.

Even if a candidate did wear an earpiece, any advantage would be questionable. As TV and radio presenters can attest, listening to someone while simultaneously talking during the back-and-forth of a live event is a difficult skill to master.