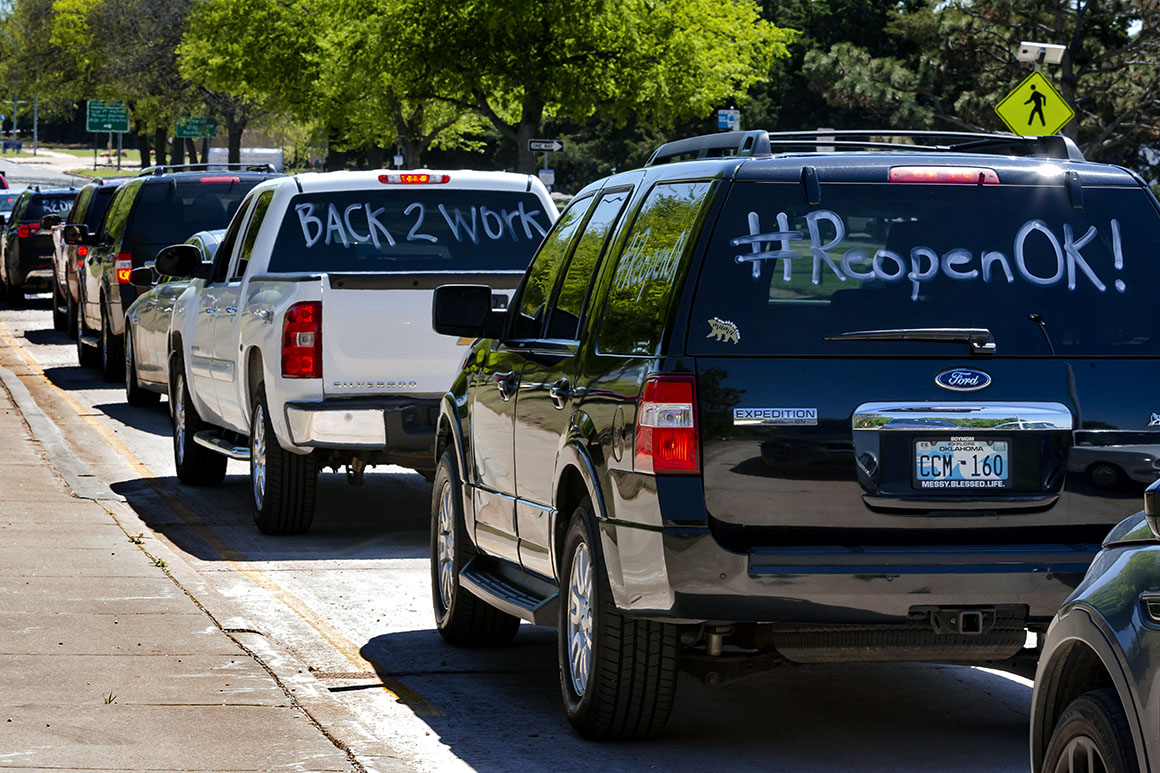 Ronda Vuillemont-Smith knew just where to go for help when she was considering organizing a rally to protest the coronavirus closures in her home state of Oklahoma: FreedomWorks.

She knew the conservative Washington, D.C. group that pushes for smaller government and lower taxes was also a repository for activist training and advice. And, sure enough, FreedomWorks quickly responded, creating a one-page #ReOpenAmerica Rally Planning Guide, offering tips for activists across the nation: Write a simple message on a homemade sign like “Let Me Feed My Family,” bring pink slips and eviction notices, invite health care workers, invite religious leaders.

The document, obtained by POLITICO, offered a narrative to promote: “We’ve done our part to flatten the curve — and now the government needs to get out of the way.”

Two days later, Vuillemont-Smith pulled off the rally in Oklahoma City, with hundreds of cars showing up.

Over the past two weeks, mostly conservative activists have held protests in at least a dozen states to protest ongoing state stay-at-home orders. As the events have become more widespread, they have also become better organized and partisan as national groups get involved. More protests are expected this week, and FreedomWorks is helping with promotion and logistics.

From the White House, President Donald Trump has leaned on governors to relax strict lockdowns and encouraged the protests, further politicizing the issue.

“These are great people,” Trump said at a recent news conference. “They’ve got cabin fever. They want to get back. They want their life back. Their life was taken away from them.”

While FreedomWorks and other conservative groups are pushing to amplify the protests, others have declined to get involved. For example, Americans for Prosperity, the flagship nonprofit of Charles Koch’s political network which helped organize the tea party movement a decade ago, is not involved this time, though the group is pushing for the country to reopen, said Tim Phillips, the group’s president. And David McIntosh, president of Club for Growth, a national network of 250,000 pro-growth, limited government Americans, said his group is focused on pushing Trump to slash regulations for businesses to boost the economy after it restarts.

A conservative leader familiar with the situation said it’s a mistake for Trump and national groups to involve themselves in the protests, inherently transforming the rallies into another culture war battle, pitting conservatives against liberals.

Those battle lines have already been drawn, though.

Trump has repeatedly picked fights with governors during the pandemic, quibbling over the availability of tests and medical supplies, as well as whether the president has authority to force states to rescind stay-at-home orders. Polls show Americans think governors are doing better jobs than the president in handling the virus.

“He’s very much into polls numbers and ratings,” said Jim Hodges, a former Democratic governor of South Carolina. “I imagine it infuriates him that he’s the polar opposite of governors. They’re getting good marks and his are the polar opposite. That’s the sort of stuff that drives him crazy.”

In Virginia, David Britt, who is helping organize a cars-only protest scheduled for Wednesday near the state Capitol, said he voted for Trump but would prefer the president and national organizations stay out of the local events.

A 60-year-old mental health counselor from Fairfax, Va., Britt said he doesn’t want to take the focus off Gov. Ralph Northam’s lockdown, which has directed people to stay at home until June 10 and ordered nonessential businesses to stay closed until May 8. If businesses don’t reopen before then, Britt argued, Virginia could lose up to 40 percent of its restaurants.

“Governor Northam really overreacted and overreached,” he said. “We need an earlier date.”

Trump has repeatedly blasted Northam in recent months over comments he made last year about late-term abortions as well as new gun restrictions he signed into law this year.

“We didn’t want politics in this,” said Britt, who asked people not to bring Trump signs or Confederate flags, which have appeared at some of the rallies. “This is something apolitical, totally impartial. We really want to be focused on getting Virginia open.”

But political groups and Trump allies have their fingerprints on several of the protests around the country.

Stephen Moore, an outside Trump economic adviser, helped plan a protest in Wisconsin.

And other organizers were among the 100 activists who attended a long-planned FreedomWorks training session for women held the first weekend in March. The event came just days before the federal government issued its first social distancing guidelines.

Vuillemont-Smith was one of those women at the training. She decided on April 13 to protest the decision to close nonessential businesses — including hair salons and gyms — through the end of April. Republican Gov. Kevin Stitt has said if the state’s curve continues to flatten he will slowly begin to reopen next month in phases.

Vuillemont-Smith was one of the first to contact FreedomWorks about the protests. The group has since helped connect activists in the same area, promoted rallies and helped supply signs.

“We’re a service,” said Adam Brandon, president of FreedomWorks. He said the group, which started hearing from activists about potential protests on April 13, recently did a survey of 70,000 members and found that 9 percent are unemployed and 24 percent have had their reduced hours.

“We’re very careful not to parachute in,” Brandon added.

After talking for weeks about reopening the country, first by mid-April and then by May 1, Trump released guidelines last week designed to gradually ease social distancing guidelines in three phases after regions meet certain criteria, including a downward trajectory of cases and an aggressive testing program.

After the guidelines and protests, some states began announcing small steps to reopen. On Monday, Georgia Gov. Brian Kemp, a Trump ally, announced some businesses could reopen as early as Friday if they adhere to stringent social distancing and hygiene requirements.

Trump’s team says an earlier restart could help the president in his reelection campaign in part because they see conservative activists and Republican lawmakers also pushing for a restart. If the economy begins to recover with minimal additional infections, the president will take credit. But if infections spread or a second shutdown is needed, he could be blamed.

Thus far, more than 40,000 people have died in the U.S. from the coronavirus, with more than 800,000 people infected. While initial hot spots appear to have peaked, other locations are still weeks away from their own infection high points.

FreedomWorks expects to keep playing a coordinating role as protests multiply in the coming days.

After Facebook blocked protesters from using its site to organize in-person gatherings, FreedomWorks began posting the gatherings on its website. According to the group’s page, a dozen rallies are planned for this week in Nevada, Oregon, Illinois, Ohio, Pennsylvania and Delaware, among others.

Britt, a longtime Republican activist in Virginia, said he decided to try to organize the protest in Richmond after he saw a driving rally in Lansing, Mich. He has heard from tea party activists and supporters of Sen. Ted Cruz’s 2016 presidential campaign who want to attend.

Rusty Sloan, 64, who lives outside Richmond and participated in a Zoom call with FreedomWorks activists April 13 on how to reopen the country, plans to attend the Virginia protest to oppose the “people in power — the ones who think they know the answers to everything.”

FreedomWorks, he said, is sending some signs.