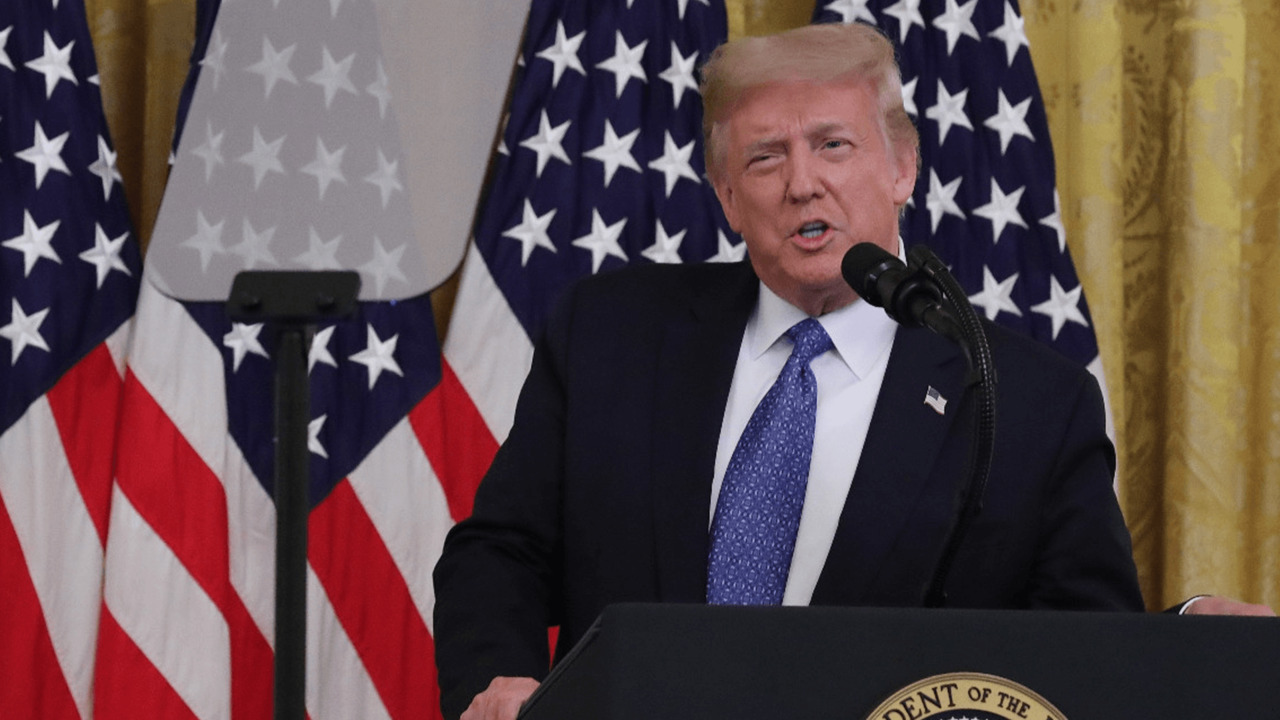 Trump also used the occasion to rebuke the Democratic leaders of cities such as Minneapolis, Philadelphia and New York, where he linked a recent spike in violent crime to calls for drastic police reforms, including pushes to defund police departments and redirect more money toward social services.

He cast the decision as a reluctant choice, though he has threatened to intervene in America’s largest cities since mass protests over systemic racism and police violence first broke out in Minneapolis at the end of May.

“Frankly, we have no choice but to get involved,” he said.

“We must remember that the job of policing the neighborhood falls on the shoulders of local elected leadership,” Trump said on Wednesday, joined by the loved ones of victims of gun violence. “Never forget that. When they abdicate their duty, the results are catastrophic.”

“Americans must hold their city leaders accountable,” he went on, a demand he said entails insisting “that community officials fully support, fully back and fully fund their local police departments.”

Barr and acting Homeland Security Secretary Chad Wolf took pains to differentiate Operation Legend from the deployment of federal officers currently taking place in Portland, Ore. Local officials and even former DHS secretaries have denounced the tactics used by those agents, who are part of a DHS-led “Rapid Deployment Force,” according to a recent court filing.

The federal agents in Portland have been shown on video clashing violently with protesters there with less-lethal projectiles and tear gas and in some cases snatching individuals from the street in unmarked vehicles. The tactics are the subject of multiple legal challenges, and Portland politicians have demanded that the federal forces be withdrawn from the city.

More than a dozen mayors preemptively signed on to a letter to Barr and Wolf objecting to a potential surge in their own cities and accusing the administration of violating protesters’ constitutional rights and employing “unacceptable and chilling” tactics while abusing federal law enforcement “purely for campaign fodder.” In a similar letter to congressional leadership, the same group asked for hearings on the issue and the inclusion of language in spending bills to block taxpayer money from paying for such operations.

Both of Oregon’s senators and two Portland-area House members on Wednesday asked inspectors general at both the Justice and Homeland Security departments to look into the actions of federal forces in the city.

But leaders in New Mexico and Chicago suggested that they weren’t totally opposed to what the administration announced.

In Chicago, where Mayor Lori Lightfoot had asserted she would not allow a Portland-like force in her city, the mayor boasted that “I’m glad to see the president got the message.”

While she asserted the city would keep a close eye on the officers stationed there, Lightfoot didn’t rule out the potential upside.

“If those agents are here to actually work in partnership on support of gun violence and violent cases, plugging into existing infrastructure federal agents, not trying to play police in our streets, then that’s something different and that may add value,” she told reporters during a news conference, though she added: “It’s too soon to be able to say if this is a value add or not.”

Her hesitant embrace of federal assistance came as her city saw 23 shootings on Tuesday alone, including a mass shooting outside of a funeral home that injured 15.

But the mayor also accused the president of targeting Democratic-led cites to “divert attention” from what she called his “failure” on the coronavirus pandemic, a notion that Trump rejected later on Wednesday.

Gov. Michelle Luhan Grisham of New Mexico, a Democrat, also said she would be monitoring the agents “for potential civil rights violations if and when the federal government sends officers to our state.”

Still, she added: “We would welcome a genuine conversation about community public safety work and fighting violent crime. I hope that is the case.”

The agents that will be detailed under Operation Legend, Barr said on Wednesday, will be “working to solve murders and to take down the violent gangs, and they’ll be working shoulder to shoulder with state and local colleagues.” He too, asserted the rise in crime “is a direct result of the attack on the police forces and the weakening of police forces.”

“This is a different kind of operation, obviously, than the tactical teams we use to defend against riots and mob violence,” he said. “We will continue to confront mob violence,” he added, calling their directive “classic crime fighting.”

staronline@reachplc.com (Lottie O'Neill) A conspiracy theorist claimed he stole a truck so he could rush to a "meeting with space aliens ". Bryce Jerald Dixon reportedly...
Read more

Riley Cardoza Loving life! Kim Kardashian took a moment to praise her family of six on Tuesday, September 29. “How did I get so lucky?!?!?!” the...
Read more