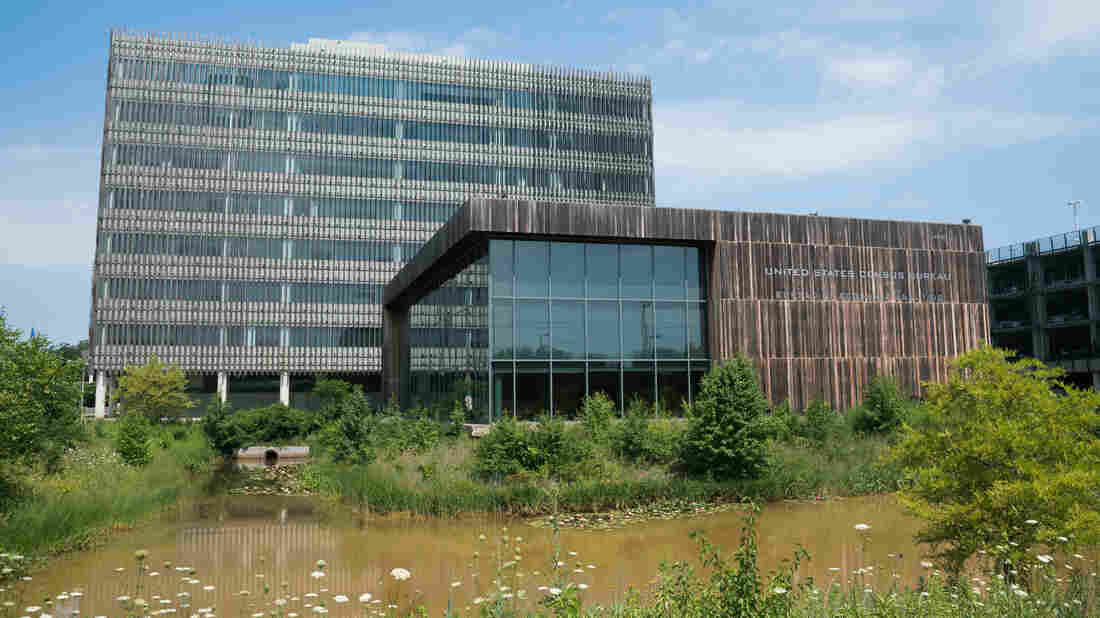 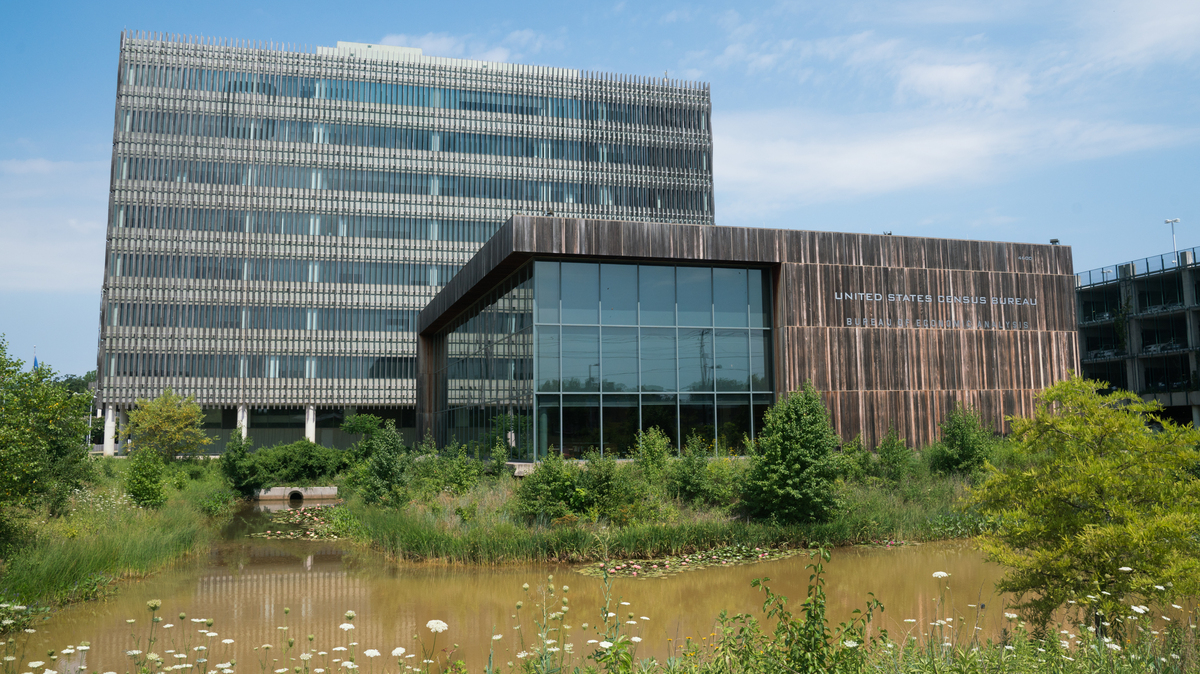 The Trump administration announced two new political appointees Tuesday at the U.S. Census Bureau, which is headquartered in Suitland, Md.

The Trump administration is adding two new political appointees to the U.S. Census Bureau, raising concerns among some Democrats about partisan interference with the ongoing national head count.

Nathaniel Cogley, a political science professor at Tarleton State University based near Fort Worth, Texas, is joining the federal government’s largest statistical agency in a newly created position of deputy director for policy, while Adam Korzeniewski — a former political consultant to a YouTube personality known for racist pranks — is serving as a senior advisor to Cogley, according to a statement by Census Bureau Director Steven Dillingham in a press release issued Tuesday.

In a separate statement to NPR, the bureau says that both of the new appointees have been working on census-related issues since April as advisors to the deputy secretary at the Commerce Department, which oversees the bureau.

While the bureau says Cogley and Korzeniewski will “support the director from a policy standpoint, especially in relation to present demands and future innovations,” it is unclear what kind of authority either will have over the count of every person living in the U.S. that the Constitution requires every 10 years. The results are used to determine each state’s share of congressional seats, Electoral College votes and an estimated $ 1.5 trillion in federal tax dollars for health care, education and other public services.

It is also not clear what qualifies Cogley to help run the Census Bureau, where day-to-day operations have been overseen by Deputy Director Ron Jarmin, an economist and career civil servant who has spent more than a quarter of century at the bureau. The bureau tells NPR that Cogley’s new role “does not affect the portfolio” of Jarmin, who also serves as the agency’s chief operating officer.

Dillingham’s statement made no mention of either appointee’s experience in the bureau’s bread-and-butter work, including statistics, demography and survey methodology. Instead, the press release highlighted the “distinguished academic background” of Cogley — who, according to a resume on his personal website, focused on African politics and international relations while studying for a Ph.D at Yale University — as well as Korzeniewski’s “exemplary military and public service experience, including prior Census Bureau fieldwork.”

Korzeniewski has worked as a lead field manager for the 2020 census in the Queens borough of New York, according to the bureau’s statement to NPR. The bureau has also confirmed to NPR that the U.S. Marine Corps veteran served as a consultant to the political campaign of Joseph Saladino, a social media personality known as “Joey Salads” who gained notoriety for staging prank videos, including racist depictions of Black people, and ended a run for Congress as a Republican last year. Saladino’s campaign paid Korzeniewski $ 30,000 for “general campaign consulting,” according to Federal Election Commission filings.

Cogley has not responded to NPR’s requests for comment, and a person who answered a phone number publicly listed under Korzeniewski’s name redirected NPR’s request to the Census Bureau’s public information office.

The bureau declined to comment on who decided to create their new positions and the categories of their political appointments.

Tuesday’s announcement sparked criticism from Rep. Carolyn Maloney, D-N.Y., the chair of the House Oversight and Reform Committee that oversees the bureau.

“The decision to create two new senior positions at the Census Bureau and fill them with political operatives is yet another unprecedented attempt by the Trump Administration to politicize the 2020 Census,” Maloney said in a written statement.

Terri Ann Lowenthal, a census consultant who once served as the staff director of the former House oversight subcommittee for the census and advised President Barack Obama’s transition team, notes that it is unusual to have a second deputy director at the bureau.

“It’s hard to draw any other conclusion other than the White House is trying to keep a close eye on the final implementation of the census with the possibility that they could interfere in the Census Bureau’s efforts to take the best census possible,” Lowenthal says.

The appointments come at a critical moment for the beleaguered 2020 census, which has been upended by the coronavirus pandemic. The bureau says the outbreak has so delayed its plans that it needs Congress to change legal deadlines for reporting census results so that the bureau has more time to finish counting the country’s residents by the end of October.

After announcing a shutdown of fieldwork in late March because of stay-at-home orders, the bureau is now preparing to send door knockers to neighborhoods around the U.S. starting next month to try to conduct in-person interviews with households that have not yet filled out forms for the count.

Meanwhile, the bureau is under pressure from an executive order by President Trump to use government records to produce census block-level citizenship data — an alternative to the administration’s failed attempt to add the now-blocked citizenship question to the 2020 census. That data, a GOP strategist concluded, would be “advantageous to Republicans and Non-Hispanic Whites” when voting districts are redrawn after detailed demographic data from the 2020 census are released.

With the national self-response rate for the census at close to 62% as of Monday — leaving roughly four in 10 homes nationwide yet to be counted — one of the major challenges facing the bureau in these final months of counting is declining public trust in the government, especially among historically undercounted groups, including communities of color, who are less likely to participate in the count on their own.

These new appointments could undermine efforts by the bureau and community groups around the country to boost census participation, warns Vanita Gupta, who heads The Leadership Conference Education Fund, a census advocacy group, and previously served at the Justice Department during the Obama administration.

“It is concerning that the White House is apparently playing partisan political games again with the 2020 Census,” Gupta said in a written statement.

John Thompson, a former Census Bureau director who was appointed by Obama after working 27 years at the agency and left that top post during the Trump administration’s first year, is concerned about how elevating a political appointee focused on policy to the agency’s highest ranks could harm the bureau’s reputation.

“It raises the specter that the administration will attempt to influence the objective data that the Census Bureau puts out,” Thompson says, putting extra emphasis on “attempt” because he says he has the “greatest confidence” that career staffers will not produce biased statistics or make political decisions.

“If they were pressured, they would resist to the point of resigning,” Thompson adds.

NPR researcher Will Chase contributed to this report.