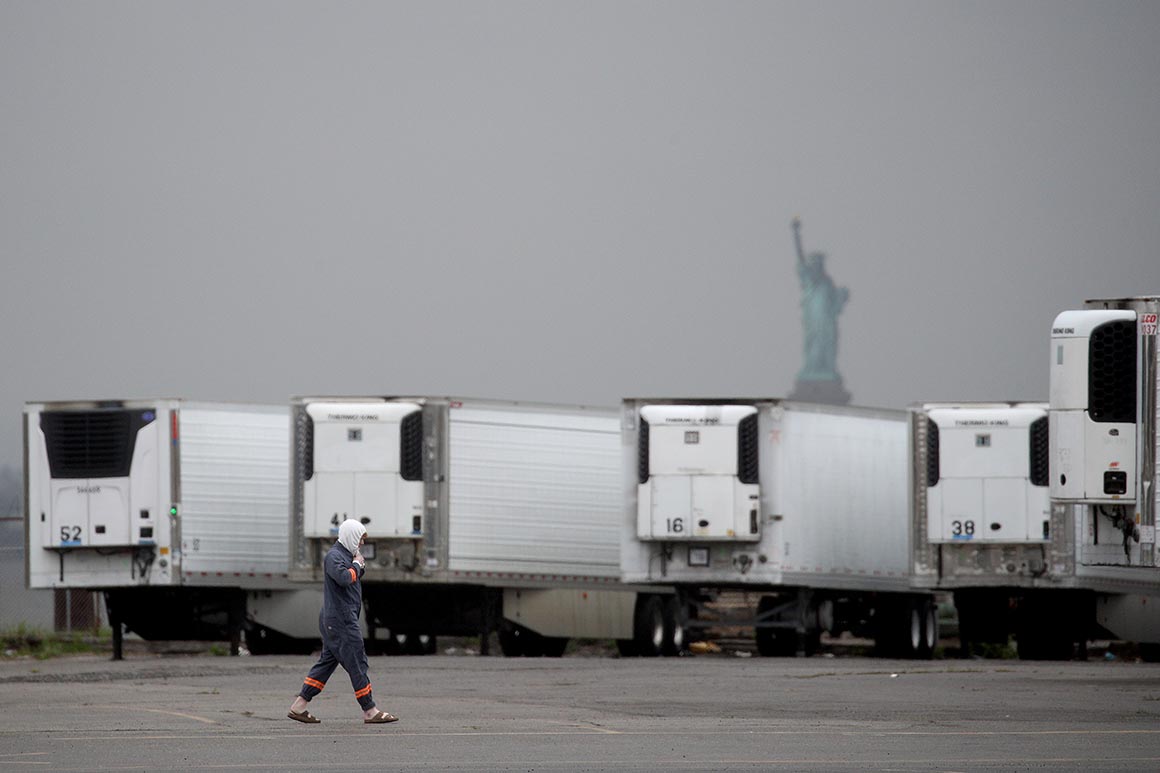 More than 70,000 Americans have died from the coronavirus — if you believe the government.

An increasing number of conservatives are convinced the medical community and the media are inflating the coronavirus death toll for political purposes, despite nearly all evidence indicating that, if anything, the figure is an undercount.

The conspiracy theory started with those who argued the figure was being manipulated, before morphing into a more generalized suspicion about coronavirus modeling among Republicans. Fox News has begun to feature a constant drumbeat of doubt about the reliability of any model, and President Donald Trump on Sunday called the models “wrong from day one” and “out of whack,” but insisted on Tuesday he believed the government’s death toll.

The uncertainty among some conservatives emanates from a long-standing wariness of health experts and the mainstream news organizations reporting on the fatalities. And it has fueled misgivings about every number originating from officials and researchers, as well as about whether the media is incorrectly contextualizing those numbers to degrade the president.

To health experts, it’s a disturbing trend that could lead to people not taking the government’s hygiene and social-distancing orders seriously, further exacerbating the coronavirus outbreak.

“By diminishing the fatality and the overall burden of mortality with Covid-19, what people are trying to do is diminish the gravity of the situation for whatever agenda,” said Dr. Felipe Lobelo, a former officer at the Centers for Disease Control and Prevention who worked on the agency’s response to the H1N1 virus. “That will lead to relaxing of public health measures, or lack of funding for contact tracing, which is critical or testing, or all the things that we need to do in order to keep the virus at bay.”

To skeptics, it’s an understandable response to a biased media.

“Mainstream outlets have made themselves out to be the opposition to conservatives and Trump supporters during the Trump administration mainly because of the pundits and opinions that they prominently promote,” said Tim Young, a columnist at the right-leaning Washington Times and a SiriusXM radio personality.

The idea that death tolls are overblown originates in a kernel of truth — the fact that some authorities are including suspected, but not confirmed, coronavirus deaths in their initial totals. Health specialists say the approach is essential to ensure that the death toll is not significantly undercounted in the moment.

“The danger is to have a misrepresentation of how lethal the virus is,” said Lobelo, now an associate professor at Emory University’s Rollins School of Public Health.

In fact, researchers say, even the commonly accepted totals likely don’t capture the full scope of the pandemic’s fatalities. Early coronavirus deaths may have been misidentified, while others may have died from coronavirus without getting a test or going to the hospital.

Those wary of the tally counter say it is irresponsible to factor in any suspected coronavirus deaths, arguing these fatalities could be tied to other health conditions and that it’s improper to speculate.

Conservatives have also been suspicious about the research originating from China at the beginning of the pandemic, arguing that the U.S. and the rest of the world are operating with manipulated data. The White House has echoed those misgivings, with Secretary of State Mike Pompeo saying Beijing has withheld information about the outbreak.

Young helped spark claims on Saturday that the CDC was misreporting fatality data when he tweeted: “HOLY SHIT: Did I read this wrong or did the CDC just revised the national COVID-19 deaths to 37,308?!?!”

The tweet misrepresented the CDC figure, which is based on death certificate data that takes several weeks to process. That means the number would naturally lag well behind the more up-to-date count cited by government officials and researchers, which was nearing 70,000 on Sunday.

Newsmax’s John Cardillo made a video claiming it was evidence “the CDC is lying to you.” Former White House adviser Sebastian Gorka claimed it was a sign that health officials were overreacting.

“Not only does this prove that the Chinese virus is not nearly as deadly as originally believed, but it also most likely confirms that many of the deaths previously attributed to the Coronavirus were actually caused by other underlying factors, such as pre-existing conditions, or even deaths falsely attributed to the virus when said victims were not proven to have had the virus in the first place,” Gorka wrote on his website America First.

Though the Fox News talent stable did not accuse the CDC of lying, several personalities cast a generalized suspicion on the projections and models driving reopening policies over the past several days.

“One thing is pretty certain: The models that we have been told to deal with have consistently been wrong, on the plus side and the negative side,” “Fox and Friends“ host Brian Kilmeade said on Tuesday.

Later that day, Laura Ingraham expressed doubt about a recent revision of a popular University of Washington coronavirus model, which has been extensively cited by health officials, including the White House. The model initially estimated in early April that the outbreak would result in roughly 66,000 deaths by Aug. 4 — a number the U.S. has already surpassed. The latest revision came from updated projections accounting for increased mobility as social-distancing measures are relaxed across the country.

Ingraham wasn’t buying it. “If you’re not confused yet, now they’re saying that 120, 134,000 could die from Covid by August,” she said. “What? That’s double what they were saying a few weeks ago.”

Young defended his tweet, arguing that officials should rely on the death certificate data, instead of extrapolating.

“The lag time is a speculative piece,” he said, pointing to Pennsylvania’s recent decision to drop 201 deaths from the presumed fatality count until their cause of death was fully investigated. “If that higher number is ultimately correct, then we shouldn’t be reporting those higher numbers until we have the full data with death certificates including the actual causation of death.”

Sunday night, Trump aired his own doubts to ABC’s David Muir, when he was asked about the ongoing updates of various coronavirus death models, several of which had recently been revised upward to reflect newly relaxed social-distancing guidelines in several states.

Public health veterans and those who study how information is disseminated said shifting predictions are common in emergency situations, which only fuels conspiracy theories.

“Finding anomalous data during extraordinary circumstances is not unsuspected,” said Dr. Jane Donovan, research director of Harvard University’s Shorenstein Institute, who studies misinformation. “It’s just that right now we have a set of armchair epidemiologists who are looking for discrepancies everywhere and turning them into conspiracies.”

Lobelo said counting the presumptive deaths was scientifically accurate, saying that flu-related deaths were counted the same way, even if the primary cause was different.

“The cause of death could be a heart attack, or cardiac arrest,” he said. “But if you’re able to identify Covid-19 in a patient that had heart disease, and that actually died because of a heart attack, you really do know that Covid-19 is the actual cause of death. Otherwise that patient would have not died, despite having that risk factor.”

Axios reported Wednesday that behind the scenes, Trump has been telling advisers that he thinks the death toll is being inflated, pointing to New York’s recent addition of 3,700 more fatalities to its overall count. City health officials said the additions represented cases where a patient was never tested for the coronavirus, but was likely to have died from it.

One theory Trump reportedly floated was that hospitals were overdiagnosing Covid-19 deaths in order to receive financial benefits from Medicare, a baseless theory that Donovan said she’d spotted online weeks ago, spread by right-wing commentators. However, she added, this was from a period when the supply of test kits was low and doctors were left to make the determination themselves — a situation similar to the reporting on death certificates.

“It takes time to document, record, aggregate and publish data,” she noted.

“Why would a conservative, Republican, or Trump supporter, after seeing those consistent left-leaning commentary decisions, continue to view that source as unbiased and trustworthy?” he said.

Politics aside, Lobelo said the factor driving people’s suspicion of the models “all boils down to uncertainty.”

“The scientists are used to uncertainty because that’s how we operate. That’s part of the scientific premise of trial and error until you have a better understanding of the complex issue,” he said. “But for regular day-to-day people, uncertainty is more difficult to tolerate.”

Fox News anchor Ed Henry agreed with this assertion during a Tuesday appearance on the network.

“I think the bottom line is, people are wondering, are these models that seem very confusing and all over the place, that’s what’s being used to decide whether or not people remain on lockdown," he said. "And that’s getting some people frustrated.”