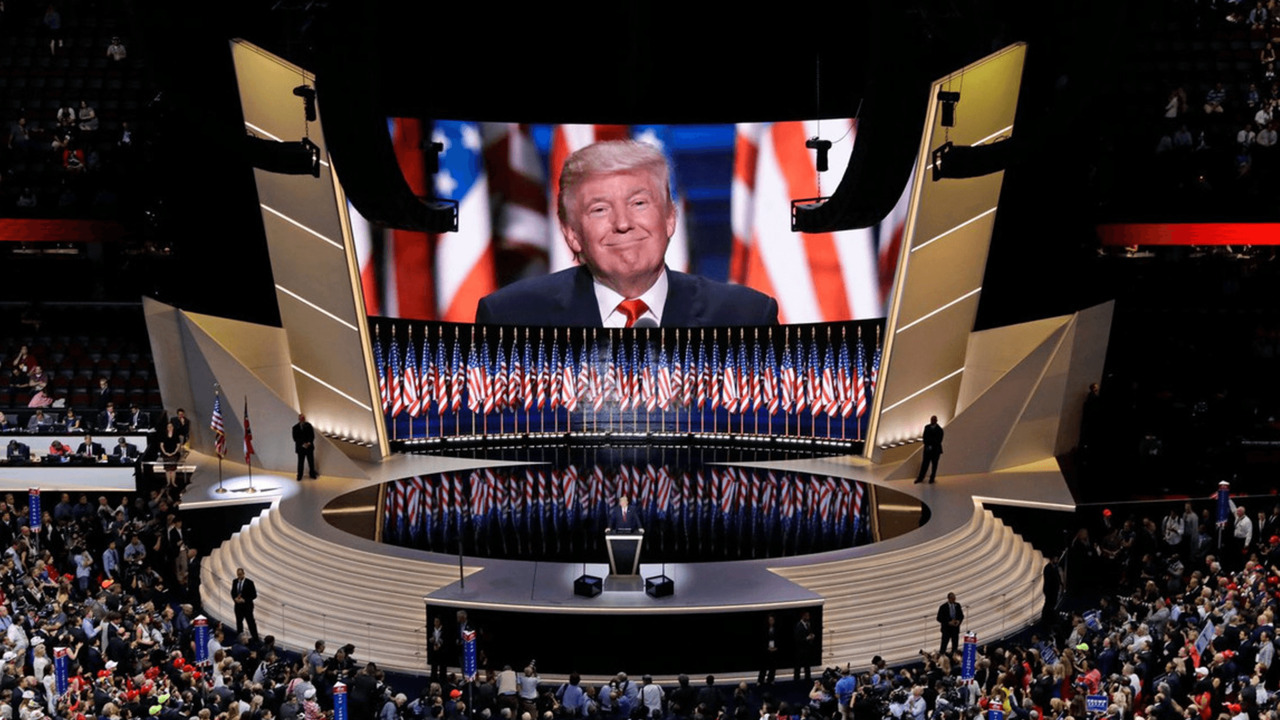 But the party’s big events, including Trump’s prime-time nomination speech, which the party decided to move to Jacksonville only last month, will move online, the president suggested.

“We’re going to do some other things with tele-rallies and online the week that we’re discussing, which would be really good. I think we’re going to do it well,” Trump said, vowing that he would still deliver a speech “in a different form.”

“We didn’t want to take any chances,” the president said in his abrupt announcement, acknowledging what public health experts had long warned: “There could be nothing like our last convention, unfortunately.”

“It’s a different world, and it will be for a little while,” he conceded.

Trump’s comments came on the same day that the U.S. surpassed 4 million known cases of coronavirus, a milestone that came just 15 days after the country marked its 3 millionth known case.

The party selected Jacksonville to host its major speeches only after Trump and Gov. Roy Cooper of North Carolina, a Democrat, butted heads over Cooper‘s insistence that public health precautions like social distancing be enforced in the convention’s original host city of Charlotte.

At the time, Florida appeared to have escaped the kind of major coronavirus outbreaks seen in the Northeast, even as the state’s governor, Ron DeSantis, a close Trump ally, took most of his cues on closing and reopening the state from Trump over the objections of public health experts.

But as Florida’s outbreak has worsened, becoming one of the hardest-hit states in the country over the past few weeks, there have been signs the convention wouldn’t be the blowout event that Trump envisioned.

Late last month, Jacksonville adopted a mask mandate requiring face coverings to be worn indoors and in public where social distancing was not possible. Last week, amid reports that the Republican National Committee was looking to move its events outdoors, the committee announced that attendance would be restricted to delegates only for the first three nights.

The RNC’s chairwoman, Ronna McDaniel, said that for the final night of the convention, when Trump was scheduled to deliver his speech, attendance would be expanded to allow delegates, a guest of their choosing and alternate delegates.

Then on Monday, Jacksonville’s sheriff sounded the alarm on security preparations, telling POLITICO that he wouldn’t be able to provide security for the convention because of a lack of clear plans, adequate funding and enough law enforcement officers.

Still, Republicans insisted the event would be safe, and as recently as Tuesday the Trump campaign’s communications director was expressing confidence that the convention “will be a great … series of events over the course of four days and it will be safe.”

In between, more than a dozen GOP members of the House and Senate said they were not planning to attend this year‘s festivities, and Senate Majority Leader Mitch McConnell cast doubt on whether the convention would even be held.

A member of the Jacksonville 2020 Host Committee said he knew that cancellation was a “possibility,” but said he did not know about it before Trump announced the move.

“This was news to me and I got it just like you got it,” the committee member said.

The host committee member said that organizers were raising plenty of money for the event, but that many people were making it clear they had no plans to attend the event in person because of the continued rise in coronavirus cases.

“Everyone thought it was foolish,” the member said. “Covid is spiking and we’re going to have this event in Florida. I think finally enough of that resonated long enough for that decision to be made.”

Jacksonville‘s mayor, Lenny Curry, and Sheriff Mike Williams reacted to the cancellation on Thursday with a clear sigh of relief.

“We appreciate President Donald Trump considering our public health and safety concerns in making this incredibly difficult decision. As always, in Jacksonville public safety is our number one priority,” they said in a joint statement, asserting that by canceling the convention he had “once again reaffirmed his commitment to the safety of Jacksonville Florida and the people of the United States of America.”

And the leader of the state GOP, Joe Gruters, hailed Trump’s decision as “selfless,” as he echoed Curry and Williams in applauding the president for putting the “safety and well-being of Floridians first.”

Trump’s new campaign manager, Bill Stepien, meanwhile, maintained that Trump “has built the most innovative political campaign in history and will provide exciting, informative, and enthusiastic programming so Republicans can celebrate” his renomination. Stepien said in a statement that “we look forward to celebrating the historic achievements of the administration and exposing what Joe Biden is — the empty vessel, Trojan Horse candidate used by the extreme left to advance their radical agenda.”

Trump explained that he made the decision to cancel the Jacksonville portion of the convention came following a meeting with his political team earlier on Thursday.

“It’s a place I love. And I love that state,” he said. “The drawings look absolutely beautiful. I never thought we could have something look so good, so fast, with everything going on. And everything was going well. But I looked at my team and I said, the timing for this event is not right, it’s just not right with what’s happened recently, the flare-up in Florida, to have a big convention. It’s not the right time.”

Trump added later that “I care deeply about the people of Florida and everywhere else, frankly, in this country and even in the world who would be coming into the state, and I don’t want to do anything to upset it.”

Florida set a nationwide record for new daily cases several weeks ago when it reported more than 15,000 new infections in a day. On Thursday, the state’s reported total of new cases still topped 10,000, as has been the case nearly every day for two weeks, and recorded a record-high 173 deaths.

Asked whether his decision to cancel the convention stemmed from concerns that he wouldn’t be able to keep attendees safe, Trump demurred.

“I just felt it was wrong … to have people going to what turned out to be a hot spot,” he said, adding quickly that “when we chose it, was not at all hot — it was free.”

But “all of a sudden it happened quickly,” Trump continued, predicting that Florida would “be doing very well very shortly.”

He denied that state officials had asked him to cancel the convention, but in perhaps a signal of his understanding that the virus has badly dented his political standing, Trump maintained that “we have to be careful and we also have to set an example.”

Despite his resistance to follow the guidance of public health officials thus far on everything from masks to social distancing, and even as he has pushed aggressively for schools to reopen for in-person instruction this fall, Trump told reporters that “setting the example is very important.”

“It’s hard for us to say we are going to have a lot of people packed in a room and then other people shouldn’t have to do it,” he said.

Democrats announced in June that their convention, which had already been delayed because of the virus and would have taken place last week, would be almost entirely virtual. Though Biden will accept the nomination in Milwaukee as planned, the party hasn‘t released details about his acceptance speech.

The party has encouraged delegates to stay away, proposing the idea of holding regional satellite “mini conventions,“ though some Democrats have begun to express skepticism about doing even that.

Gary Fineout contributed to this report.