Trump casts job data as cure-all for a deeply divided... 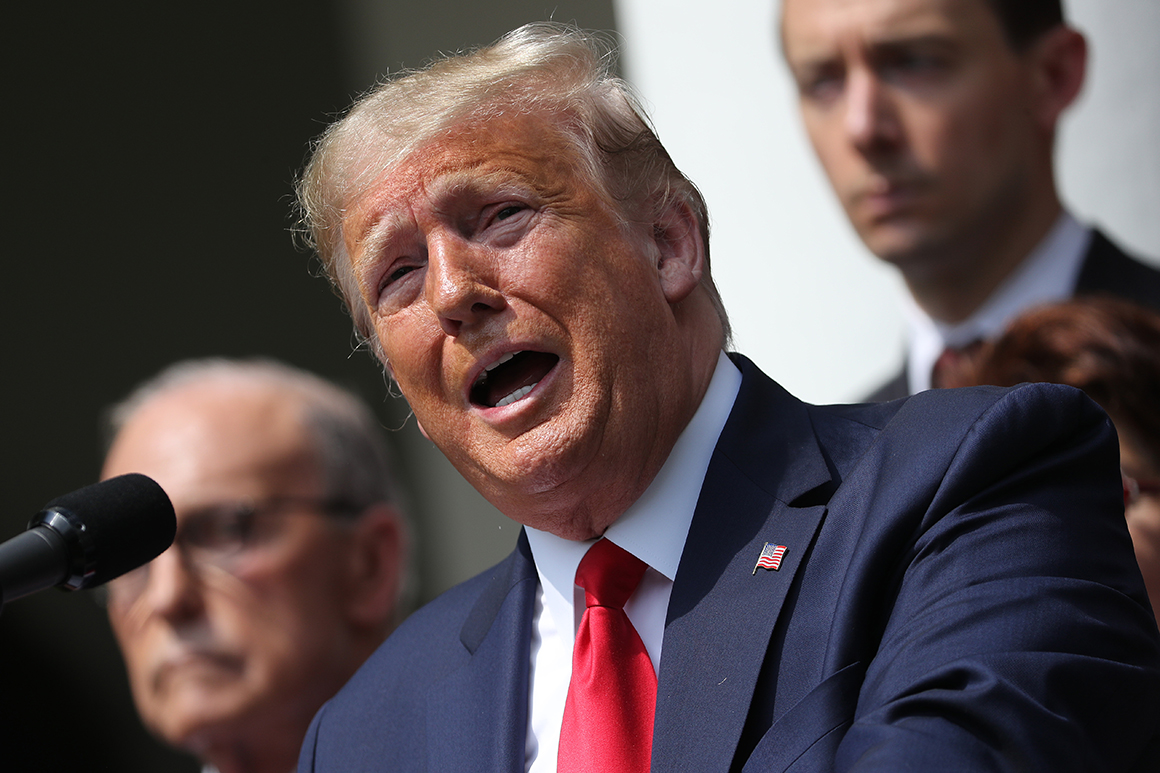 During a bill signing immediately following his meandering, roughly hourlong series of remarks, when asked about his plan to combat systemic racism, the president indicated he would seek to heal America’s centuries-old, entrenched inequities by reviving an economy that had been shuttered by an infectious outbreak.

Although the unemployment rate for white workers dropped nearly 2 percentage points last month to 12.4 percent, the rate of unemployed black workers rose slightly to 16.8 percent in May, an increase of 0.1 percentage point from April.

Vice President Mike Pence, addressing reporters at the news conference, characterized the burgeoning “American comeback” as a “tribute to the strong decisions” Trump made as the coronavirus first began to spread in the U.S.

But appearing Friday afternoon at a listening session with African American faith and community leaders in Maryland, Pence seemingly broke with the president by predicting improved financial indicators alone were insufficient to solve the nation’s complex issues of race.

“It will not be enough just for us to heal our economy,” he said. “We’ve got to heal that which divides by breaking down the barriers to opportunity to African Americans and any American that has been left behind.”

While the administration had “received encouraging news today,” Pence added, “we want to follow that by listening and learning and putting into practice the things that will heal our land for every American [and] extend equality of opportunity to every American.”

The president’s news conference Friday, which capped a tumultuous week for the White House that began with the violent dispersal of apparently peaceful protesters from Lafayette Square, came after Trump had reveled in the unemployment report’s release earlier in the morning.

“Really Big Jobs Report. Great going President Trump (kidding but true)!” he wrote on Twitter, one of the several self-congratulatory social media posts the president issued in the minutes following its publishing.

Trump paraphrased cable news coverage of the data in subsequent tweets, hailing the addition of 2.2 million jobs to the U.S. economy last month as “INCREDIBLE,” “AMAZING,” and a “stupendous number” that “is a stunner by any stretch of the imagination.”

He also sought to tie the apparent upturn in economic activity to his own electoral fortunes, suggesting without evidence that former Vice President Joe Biden, his prospective Democratic general election opponent, would wipe out whatever gains had been achieved as a result of the country’s gradual reopening.

“Oh no, the Dems are worried again. The only one that can kill this comeback is Sleepy Joe Biden!” Trump wrote.

Biden fired back at the president Friday afternoon during a speech in Delaware on the unemployment data, blasting Trump for invoking Floyd’s death at his news conference.

“George Floyd’s last words, ‘I can’t breathe, I can’t breathe,’ have echoed all across this nation and, quite frankly, around the world,” Biden said. “For the president to try to put any other words in the mouth of George Floyd, I frankly think it’s despicable.”

Friday’s jobs numbers come after the U.S. recorded a devastating 14.7 percent unemployment rate in April and outperformed many economists’ dire forecasts that the amount of out-of-work Americans could approach or surpass 20 percent in May.

The report also represents a rare headline this week the White House has been eager to advertise, after contending with condemnation for its use of military force against protesters, scrutiny of the president’s threat to deploy active-duty troops to U.S. cities, and anxiety over polls showing Trump lagging behind Biden in key 2020 battlegrounds.

Despite Trump’s celebratory public posture, Senate Minority Leader Chuck Schumer (D-N.Y.) warned Friday that “this is not the time to be complacent” and called for the passage of additional coronavirus relief legislation to further shore up the economy. The White House and congressional Republicans have been reluctant to embrace another round of federal aid.

“A 13 percent unemployment number is not a time to be joyous, stupendous and stop doing things, because it’s a very strong likelihood things will go down again if there’s no new stimulus,” Schumer told MSNBC, expressing concern that “these numbers will make the president and the Republican Senate complacent.”

Schumer’s assessment quickly proved accurate. Stephen Moore, a conservative economist who serves as an outside adviser to Trump, argued in an interview Friday with POLITICO that “this extremely optimistic jobs report really negates the case for another big multitrillion dollar spending bill.”

Max Cohen and Caitlin Oprysko contributed to this report.