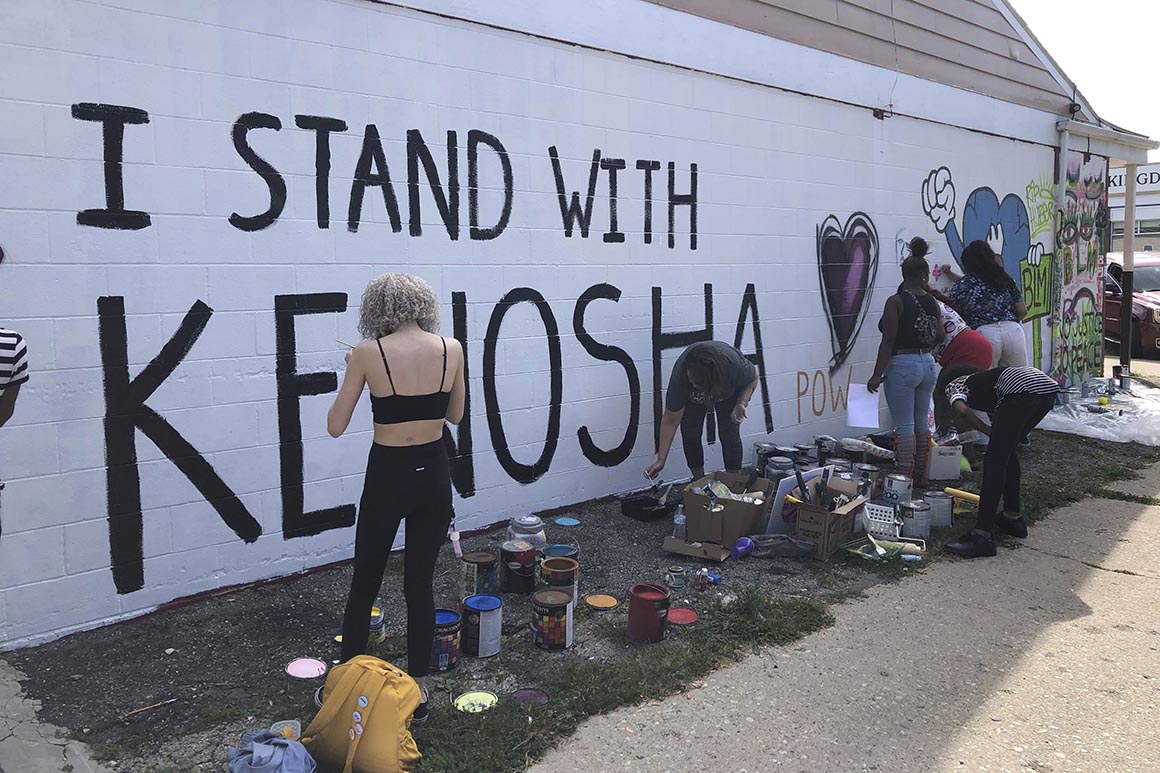 On its face, the assumption that moderates and independents might flock to Trump feels consistent with what we learned about white voters and racial resentment in 2016. And the race is tightening up in nearby Minnesota, fueled by demographic tensions between the cities and their outstate counterparts and rising cultural tensions in the wake of the George Floyd protests. But in Wisconsin, the prediction that those put off by the protests will embrace Trump hasn’t yet been supported by the polling or in conversations with pollsters and operatives here.

But that shift doesn’t necessarily mean voters are embracing Trump’s calls over the summer for law and order. Not only did the head-to-head matchup with Joe Biden hardly budge, but the president’s handling of the protests continued to be one of his weakest points with Wisconsin voters, even more so than how he’s addressed the Covid-19 pandemic. In June, 30 percent of Wisconsin voters approved Trump’s handling of the protests. In August, 32 percent did—hardly any movement at all.

Why? Because, to Wisconsinites, after such a tense, violent summer, the protesters might look bad, but Trump, and his law-and-order supporters, don’t look much better. Charles Franklin, director of the Marquette University Law School Poll, said it was striking that Wisconsinites had such a positive view of Black Lives Matter and the protests in late June even as they watched violence begin to erupt next door in Minneapolis. Part of that, he said, was likely because they were also seeing things like Lafayette Park being cleared in Washington, D.C., ahead of a Trump photo op and bad police behavior such as a Buffalo, N.Y. police officer pushing down an elderly man and walking past him as he bled on the sidewalk. “It wasn’t just a one-sided set of news and messages pushing people to great sympathy for the protests and the Black Lives Matter movement,” he said; perceived abuses by the police and Trump were increasing it, too.

As that sympathy declined, Democratic pollster Paul Maslin, who is based in Madison, also theorized about why Trump support didn’t follow in the state. Some of the unrest may have upset Wisconsin voters, he said. “But that attitude is not going to cause me to say, ‘Oh, somehow Donald Trump is the solution to that problem.’ If anything, it’s going to make me feel more strongly that getting rid of Donald Trump is one of the solutions.”

The slide in Black Lives Matter support among Wisconsinites came after Madison saw violent protests following the arrest of a Black demonstrator. People looted and vandalized stores along the city’s famed State Street. Two statues on the Wisconsin Capitol grounds were torn down. One was a statue of a woman with her arm extended to the east in an echo of the state’s motto “Forward,” and the other was dedicated to an anti-slavery activist who died in the Civil War fighting for the Union.

Franklin said the slide in support for Black Lives Matter was driven largely by Republicans who were likely following the president’s rhetoric on violent protests. Still, support also dipped among Democrats and independents, as well as in the suburbs, exurbs, small towns and rural areas.

Now, the story of Kyle Rittenhouse complicates even more the assumption that disaffection with the Black Lives Matter movement or protesters will translate to Trump support. Rittenhouse, a 17-year-old from nearby Antioch, Ill., heeded a call from the self-styled militia group “Kenosha Guard” via Facebook for armed citizens to converge on Kenosha to “Protect Our Lives and Property.” Two days after Blake’s shooting, Rittenhouse shot three people demonstrating against the police, killing two of them.

The shootings were caught on video and circulated widely on social media, prompting frame-by-frame debates over whether it was self-defense or murder. So, too, did a video of Rittenhouse walking away from the scene, hands up and rifle slung around his front, as a line of police cars rolled up amid calls of shots fired. Local police said they had no reason to initially suspect Rittenhouse was the shooter as they drove past him. For some, that only backed up their cries of racial disparity.

Trump has so far declined to condemn Rittenhouse’s actions, telling a White House news conference on the eve of his Kenosha visit that the teen “was in very big trouble. He probably would’ve been killed” if he hadn’t acted. For those watching across the country, and in Wisconsin in particular, it’s the kind of defense that makes Trump an unappealing alternative even if one is becoming disillusioned with the protests.

While Trump support doesn’t appear to be growing in Wisconsin—at least not yet—there are a few ways the demonstrations and outrage over the shooting of Blake could end up actually helping Democrats.

Ahead of the election, there has been a focus on organizing, particularly in the city of Milwaukee, home to Wisconsin’s largest population of minority voters, and the action—or inaction—in the state Legislature over police policies could serve as a motivator come November. Hillary Clinton cratered across Wisconsin in 2016, getting 238,000 fewer votes than Barack Obama four years earlier. Much of the national attention was on heavily Democratic Milwaukee County, where Clinton’s drop-off from Obama’s votes in 2012 exceeded her losing margin in Wisconsin in 2016. (This focus on Milwaukee, though, also let her off the hook for her far more abysmal rural turnout in the state.)

Following George Floyd’s death earlier this summer, Evers called on the GOP-controlled Legislature to take up nine bills that included banning chokeholds and no-knock warrants as well as establishing law enforcement could use deadly force only as a last resort. Republicans ignored the request. But after Blake’s death, Evers again urged lawmakers to take up the bills, this time signing an executive order creating a special session of the Legislature to deal with the topic.

Still, there are few signs lawmakers will act quickly. The Senate’s top Republican said the chamber will take “months” to sift through various proposals, adding he’d like to also see new legislation increasing the penalties for violence against first responders.

Democratic state Representative Evan Goyke, whose district includes Milwaukee’s Sherman Park, said some of his constituents have been waiting years for the Legislature to take meaningful action on police policies. He noted protests this summer supporting Black Lives Matter weren’t just in the urban centers of Milwaukee and Madison in the wake of Floyd’s death, but in places like Portage, a city of 10,000 people 40 miles north of Madison. The momentum his constituents are finally seeing will weigh on their minds come November if they don’t see the Legislature act, Goyke said.

Still, nothing is guaranteed in a state that caught everyone off guard in 2016. GOP state Representative Samantha Kerkman, who represents most of Kenosha County outside city limits, is skeptical of anyone flocking to Biden amid the tumult in Wisconsin. Trump won Kenosha County four years ago partly thanks to his performance in districts like Kerkman’s. And much of what she’s heard from constituents in the past week, she says, would be music to the president’s ears.

“People don’t want their houses to burn down,” Kerkman said. “It’s not that my constituents don’t want to have that discussion. They do, but they want to feel safe first.”

Ben White But 2020 is a vastly different and more combustible environment, sparking growing unease among investors about the impact of a muddled election result....
Read more