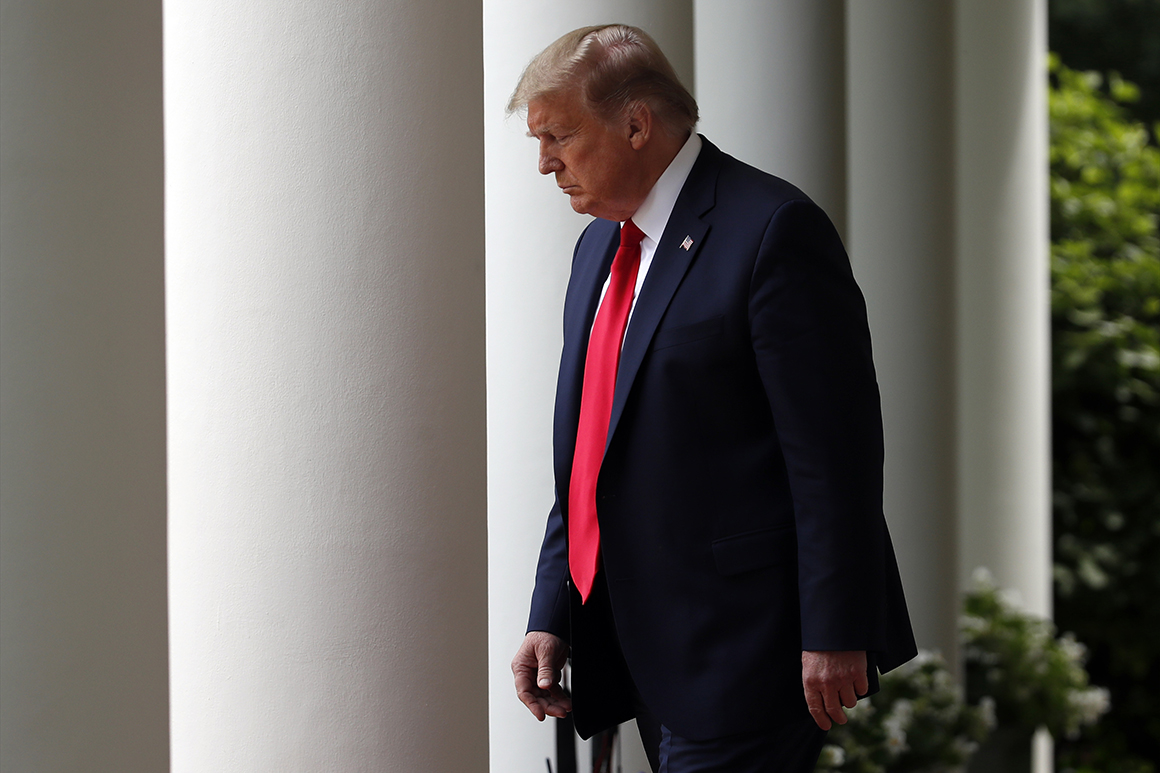 “Given his own experience with an out-of-control FBI and unfair investigations… President Trump knows how poisonous an out-of-control law enforcement process can be,” Fox News personality Laura Ingraham, a close ally of the White House, said on her program Thursday night.

But Trump’s tempered rhetoric disappeared Friday morning, as he dispatched the U.S. National Guard to Minneapolis to respond to demonstrators who have demanded that the four since-fired police officers involved with Floyd’s death be arrested and charged. One was arrested later Friday. In a pair of tweets, the president said the protesters “are dishonoring the memory of George Floyd.”

“Any difficulty and we will assume control, but when the looting starts, the shooting starts,” Trump wrote in a tweet that was subsequently flagged by Twitter for “glorifying violence.”

It was a threat apparently coined by the late Walter Headley, the Miami police chief who vowed to use violence against black protesters during 1967 protests. “We don’t mind being accused of police brutality,” Headley said.

Trump later blamed “haters” for misinterpreting his tweet, in an attempt to clean up his comments about shooting protesters. “Nobody should have any problem with this other than the haters, and those looking to cause trouble on social media,” he tweeted Friday.

Long before Floyd’s killing, the president encouraged police to be “rough” with arrestees, railed against NFL players who protested police brutality against unarmed black men during the national anthem, refused to intervene when Justice Department officials declined to bring charges last July against police officers involved in the 2014 death of Eric Garner and offered one of his first presidential pardons to Joe Arpaio, a former Arizona sheriff convicted of criminal contempt after racially profiling Latinos.

“I would caution folks who make the leap that all of a sudden Trump, and by extension Republicans, are turning a corner on black voters because he expressed a desire that justice be done in the killing of Floyd,” former Republican National Committee chairman Michael Steele said in an interview Thursday, before Trump threatened to send National Guard personnel to Minneapolis.

The Trump campaign has spent months trying to woo black voters who overwhelmingly opposed the president in 2016, including by casting his Democratic rival Joe Biden as a “bigot.” After Biden remarked that black voters who don’t vote for him “ain’t black” during a radio show last week, Trump aides tore into the former vice president and launched a website and digital ad accusing him of being racist. Biden quickly said he regretted the comment and said he’d work to earn the support of black voters.

A poll of some 400 black and white respondents conducted by Hakeem Jefferson, a Stanford political science professor, the day after Biden’s comments found that black Democrats were the least offended by the former vice president’s comments and white Republicans were the most offended.

The campaign’s eagerness to exploit Biden’s comments came amid continued efforts to convince a small percentage of black voters who might normally support the Democratic presidential nominee to back Trump or not vote at all.

Senior White House adviser Jared Kushner, the chief of architect of Trump’s outreach to black voters, has suggested the campaign should grow the president’s support with African Americans by one to two percentage points this cycle, according to people familiar with the strategy. That approach looms over Trump’s response to the deaths of Floyd and Ahmaud Arbery, a 25-year-old black man who was killed while jogging in a Georgia neighborhood in February.

Senior Trump campaign adviser Katrina Pierson, one of the president’s most high-profile African American surrogates, said Trump’s response to Floyd’s death showed that “he is doing his job as president and looking out for the interests of all Americans.”

“The death of George Floyd is a tragic case and President Trump is taking it seriously, directing the Department of Justice to get involved,” Pierson said in a statement to POLITICO Thursday.

Hours later in a midnight tweet session, Trump referred to the protesters in Minneapolis — where a local police precinct was set ablaze Thursday night — as “thugs,” while his threats of gunfire were seen by historians as “dog whistles” or flat-out “rebel yells” referring to the battle cries of the Confederacy.

“The playbook is creating threats out of other people. People who are not on your team, people who are not in your party, who are not crucial to your election chances — they are now the enemy,” said Johnson. “The playbook is to denigrate all of the others and make them seem incompatible, not just with your party and your values, but with the country, with what it means to be American and when that happens, the others are now perceived as a threat.”

Allies of the president, who once proposed mandating capital punishment for those found guilty of killing police officers, acknowledged his attempts to strike a balance. His request for an accelerated investigation into Floyd’s death came at the urging of advisers and African American surrogates involved with his campaign, while his threat to deploy National Guard personnel to respond to the protests in Minneapolis allowed him to reassert his identity as a “law and order” president. Trump routinely cast himself as an ally of law enforcement during his 2016 presidential campaign, and recently added a “Cops for Trump” coalition to his 2020 operation.

“I think you can be for law enforcement, you can be for safe cities, for community policing and support the men in blue — and be against what you saw in that video with what happened to Mr. Floyd,” said Paris Dennard, a senior adviser to the Republican National Committee and Trump campaign surrogate.

“The president’s responses have thus far been heartfelt, off-the-cuff and without notes. These weren’t prepared statements, this was President Donald Trump talking directly from his heart about what he saw,” Dennard added Thursday, before Trump described the Minneapolis demonstrators as “thugs.”

But Trump’s tweets Thursday night, Johnson said, were a return to form. “This is the most consistent thing that has happened in the last week or two. So the aberration, if there was one over the last few days from Trump, was calling the video disturbing, hoping there’s justice.”