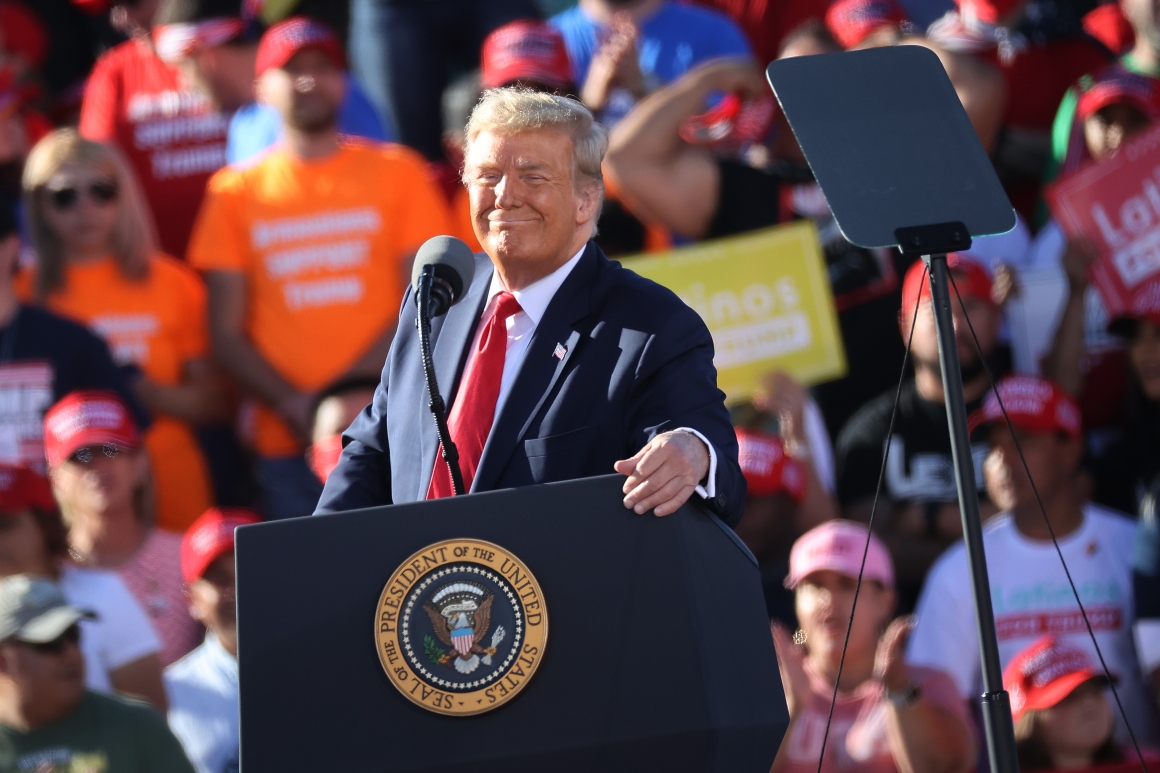 Never before in modern presidential politics has a candidate been so reliant on wide-scale efforts to depress the vote as Trump.

“What we have seen this year which is completely unprecedented … is a concerted national Republican effort across the country in every one of the states that has had a legal battle to make it harder for citizens to vote,” said Trevor Potter, a former chair of the Federal Election Commission who served as general counsel to Republican John McCain’s two presidential campaigns. “There just has been this unrelenting Republican attack on making it easier to vote.”

Never before has a health emergency cast such a large shadow over a presidential race. With just five days until Nov. 3, POLITICO’s Dan Diamond breaks down the key differences between Trump’s and Biden’s plans for tackling Covid.

Potter, who now heads the nonpartisan Campaign Legal Center, added, “It puzzles me … I’ve never worked for a Republican candidate who thought it was a good idea to make it hard for people to vote.”

For Trump, however, the math makes sense. In 2016, he won Arizona, Florida, Michigan, Pennsylvania and Wisconsin — five of this year’s most important swing states — with under 50 percent of the vote. In two others, Georgia and North Carolina, he captured exactly half the votes. Having failed to expand his base beyond a committed — and sizable — core in his first term, the president stands to gain from a diminished turnout, particularly among voters of color.

Elections have long been marred by legal and illegal forms of voter suppression. But the coronavirus — and Trump’s baseless warnings about widespread voter fraud — shifted a once-ancillary feature of campaigns into overdrive. Democrats pushed to ease voting rules amid the pandemic, and Trump pushed back.

It wasn’t just in court, either. For more than three decades, the Republican National Committee had been hamstrung by a consent decree limiting the RNC’s ability challenge voters’ qualifications at the polls, after the committee was accused of efforts to discourage African Americans from voting. After the order was lifted in 2018, Trump and the RNC began assembling a massive poll-watching operation. And Trump is heavily invested in its success.

Outraged after a court in Pennsylvania rejected litigation to allow poll watchers at satellite elections offices, Trump wrote on Twitter late Sunday night, “How terrible is this? We are just seeking a fair vote count. This can only lead to very bad things. Bad intentions much??? Disgraceful!!!”

On Tuesday morning, he tweeted, “Philadelpiha [sic] MUST HAVE POLLWATCHERS!”

The RNC and the Trump campaign bristle at the idea that they are engaging in voter suppression or that there are strategic motivations behind their actions. They frame it as resistance to a Democratic assault on election integrity.

By May — fully six months before Election Day — the Trump campaign and the RNC had committed at least $ 20 million to legal efforts they cast as necessary to maintain voting safeguards and an orderly election.

Nick Trainer, the Trump campaign’s director of battleground strategy, called it “the height of hypocrisy that Democrats call our election transparency efforts ‘voter suppression’ — they’re the ones who scared voters away from the polls for months.”

Courts have been resistant to Republicans’ claims about voter fraud in cases to restrict voting, if not outright rejecting them. But Republicans have found victories in rolling back Democratic-initiated changes on two principles: That federal courts should not change election laws close to the election — also known as the Purcell Principle — and, increasingly, that the judiciary should defer to state legislatures.

Most recently, the U.S. Supreme Court declined to reinstate a lower court’s order that extended the ballot return deadline in the battleground state of Wisconsin, meaning ballots would be due by Election Day.

Rick Hasen, an election law expert at University of California Irvine School of Law, said “trying to make voting harder during a pandemic is pretty tough to justify,” suggesting instead that “the Trump wing of the party thinks keeping the electorate smaller helps Trump.”

The effect is often to disadvantage Democratic-leaning constituencies. In swing state Florida, the state’s Republican-controlled legislature slapped additional restrictions on felons trying to register to vote after voters in 2018 approved a measure designed to restore most felons’ voting rights.

In Texas, Republican Gov. Greg Abbott limited ballot drop-off sites to one in each county, a measure with outsized effects on the most heavily populated — and more Democratic — areas like Harris County, which includes Houston.

And then there is what’s coming on Election Day. Following Trump’s call in his first debate with Biden for “my supporters to go into the polls and watch very carefully,” some far-right groups have said they will be out monitoring polls. Last week in Minnesota, a company that had been recruiting former Special Operations members to guard polling places backed off after the state’s attorney general, Keith Ellison, opened an investigation.

Recruiting volunteers for his Election Day operations, Trump calls what he’s building an “Army for Trump.”

“They’re open about it,” said Stuart Stevens, who was Mitt Romney’s chief strategist in 2012 and who is now working against Trump’s reelection. “They’re not even pretending not to rely on voter suppression.”

Every politician understands the benefit of his or her opponents’ supporters turning out in lower numbers. But Trump is the rare candidate who has openly expressed the value of addition by subtraction. Shortly after the 2016 election, Trump acknowledged in a private meeting that lower Black turnout that year benefited him, saying “it was great.”

Trump’s public comments about the electoral system in the years since have been no more encouraging for voting rights activists. He has repeatedly asserted that voter fraud is rampant and that the election will be “rigged,” despite no evidence of widespread voter fraud. That is significant because there is evidence that lowering trust in the electoral system itself depresses turnout.

Benjamin Ginsberg, a nationally recognized elections lawyer who has represented past Republican presidential nominees, said it is Trump’s language that makes his approach to voting unique.

“What’s different about this election is the president’s rhetoric,” he said. “We’ve never had a president who has said our elections are fraudulent or rigged, and based on all the years I was doing Election Day operations, there’s just no proof to support that.”

Ginsberg said, “The real problem is that fraud and suppression has become part of each party’s get out the vote operation,” noting that such rhetoric could be an animating factor for the bases of each party, but could depress turnout among low propensity voters.

It is not clear that the GOP’s efforts to reduce turnout will work. Early votes have surged past 75 million, according to the United States Elections Project, and Democrats have used concerns about voter suppression as a tool to motivate voters.

Still, Democrats remain wary of the possible effects of Trump’s efforts to shrink the electorate in his favor. In a memo circulating among Democrats late last week, one party strategist described Trump’s narrow path to an Electoral College victory as relying on “a surge in support from voters who skipped 2016 and the midterms and a substantial relative depression in Democratic turnout.” Among reasons for concern, the strategist said, “the scale and scope of the Trump campaign’s unprecedented voter suppression activities.”

“It’s the only way they can win or at least come close to winning,” said Andrew Feldman, a Democratic strategist in Washington. “We’ve seen them continuously try legal means — however unfair or grotesque the legal means are — that are nothing short of voter suppression.”

While Republicans are trying to limit ballot access, Democrats are in an equally furious effort to expand it — and to answer Trump’s poll-watching effort with a counterforce of their own. And Republicans say Democrats brought many of this year’s legal fights on themselves.

“Democrats in a lot of states tried to change the rules that governed an election 90 days before an election,” said Trainer.

Poll watchers, he said, “will be trained to ensure all rules are applied equally, all valid ballots are counted, and all Democrat rule breaking is called out — and if fouls are called, we’ll go to court to enforce the laws, as rightfully written by state legislatures, to protect every voter’s right to vote.”