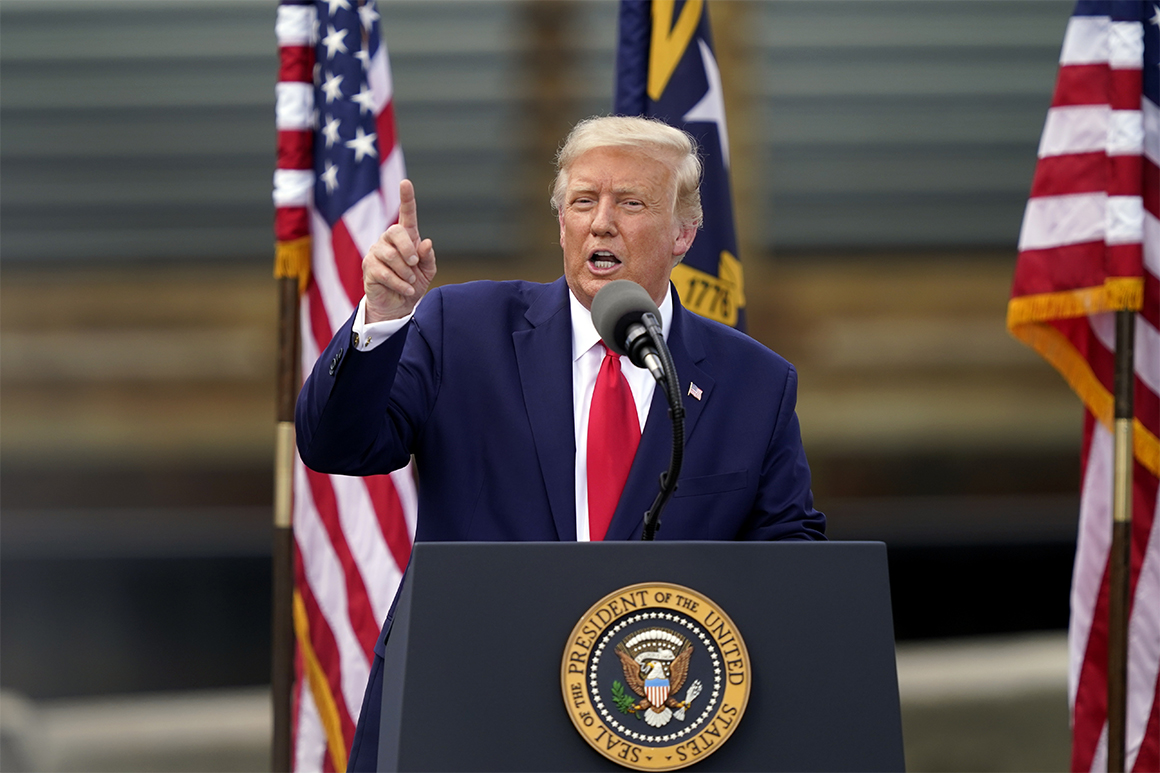 “They are going to have to check their vote by going to the poll and voting that way because if it tabulates, then they won’t be able to do that,” he told Wilmington-based WECT. “So let them send it in, and let them go vote. And if their system is as good as they say it is, then obviously they won’t be able to vote. If it isn’t tabulated, they will be able to vote. So that’s the way it is, and that’s what they should do.”

Facebook has said it will remove video of Trump’s comments “unless it is shared to correct the record,” citing its policies prohibiting voter fraud.

Trump’s latest proposal comes as the president attempts to straddle a fine line between warning that mail-in voting is ripe with fraud, despite a lack of evidence supporting that accusation, and encouraging the practice in select situations.

States have rushed to expand mail-in voting in recent months to prevent massive lines and crowds at polling places amid the coronavirus pandemic. Trump, meanwhile, has railed against sending ballots to voters whether they’ve requested one or not, while signaling approval of processes that allow voters to request a ballot in certain states, which thus far have been Republican-led swing states.

As Trump has attacked mail-in voting despite doing so himself, he has repeatedly sown doubt in the results of November’s election, declaring that the only way he could lose would be in a rigged election and at one point floating a delay in the national vote until it is safe to do so in person.

The majority of states will not be mailing unsolicited ballots to voters. Five states, Colorado, Hawaii, Oregon, Utah and Washington, routinely hold all-mail elections. Four more states — California, Nevada, New Jersey and Vermont — along with the District of Columbia, plan on mailing voters ballots in response to the pandemic. Montana has left that decision up to individual counties for November.

Trump doubled down on his suggestion Thursday, urging his nearly 87 million Twitter followers to head to their polling place on Election Day even after they have already mailed in a ballot “to see whether or not your Mail In Vote has been Tabulated (Counted).”

“If it has you will not be able to Vote & the Mail In System worked properly. If it has not been Counted, VOTE (which is a citizen’s right to do). If your Mail In Ballot arrives after you Vote, which it should not, that Ballot will not be used or counted in that your vote has already been cast & tabulated,” he continued. “YOU ARE NOW ASSURED THAT YOUR PRECIOUS VOTE HAS BEEN COUNTED, it hasn’t been ‘lost, thrown out, or in any way destroyed’. GOD BLESS AMERICA!!!”

Twitter slapped a “public interest notice” on two of the tweets, saying it would limit engagement with them but not remove them from the site.

“To protect people on Twitter, we err on the side of limiting the circulation of Tweets which advise people to take actions which could be illegal in the context of voting or result in the invalidation of their votes,” the social media platform wrote.

But Trump “is not suggesting anyone do anything unlawful,” White House press secretary Kayleigh McEnany told “Fox & Friends” Thursday morning, arguing that the president was merely encouraging voters to “‘make sure your vote is tabulated, and if it is not, then vote.’”

During a press briefing at the White House, McEnany accused the press of taking the president’s comments out of context, stressing that Trump was only suggesting a person cast a second, in-person vote if a polling place does not indicate that they have already voted.

“What Democrats want you to do is say, ‘Trust us, but don’t verify.’ Don’t verify that your vote’s been counted,” she told reporters. “This president is trying to enfranchise Americans which is exactly what he’s been saying — he wants every American to have a vote.”

“It seems to me what he’s saying is he’s trying to make the point that the ability to monitor this system is not good and if it was so good if you tried to vote a second time, you would be caught if you voted in-person,” Barr told Wolf Blitzer, calling the controversy over Trump’s comments “cheap talk to get around” his fundamental concerns about mail-in voting.

He demurred on a legal analysis of Trump’s suggestion, saying that “I don’t know what the law is” in North Carolina.

In her message to North Carolina residents, Brinson Bell sought to assure voters that the state has “numerous” safeguards in place “that prevent people from double voting,” noting that the state uses electronic pollbooks to determine who has already voted at all early voting sites, and that if a voter attempts to check in at a polling site after already having voted, they will not be allowed a regular ballot.

“A voter will be offered a provisional ballot if they insist on voting,” she said, which “will be researched after Election Day to determine whether it should be counted.”

She explained that voters who have cast ballots by mail are removed from the pollbook, “which is updated before voting starts at 6:30 a.m. Absentee ballots that are received on Election Day are not counted until after the election, and this prevents double voting.”

At the White House on Thursday, McEnany also pointed to the use of electronic pollbooks to verify whether a person’s mail-in ballot has been accepted, although not every state uses the devices, which can provide a more updated voter roll, and some states do not begin to tally mail-in ballots until after Election Day. McEnany suggested that voters fill out a provisional ballot in this case, though polling places often do not stock enough and sometimes run out on Election Day.

Electronic pollbooks are not totally foolproof themselves, however, and election security advocates have raised alarms about the lack of federal oversight and regulation for the devices, citing their propensity for crashing and potential vulnerability to tampering.

Brinson Bell also insisted that the board of election conducts audits after each election that would detect attempts to double vote, and has a dedicated investigatory team to probe such allegations. She added that the state system allows absentee and early voting ballots to be retrieved “if someone tries to get around the system” so that such attempts “will not affect the outcome of the election.”

The director also enumerated several ways for voters to check the status of their mail-in ballot, including a new tool that allows voters to track absentee ballots through the system and confirm that their local board of elections has received it, “much like they can track their online order or pizza delivery.”

Finally, Brinson Bell wrote that the board of election “strongly discourages people from showing up at the polls on Election Day to check whether their absentee ballot was counted. That is not necessary, and it would lead to longer lines and the possibility of spreading COVID-19.”

The best way to ensure that a voter’s absentee vote will be counted, she said, is for them to request and return their ballots as soon as possible.