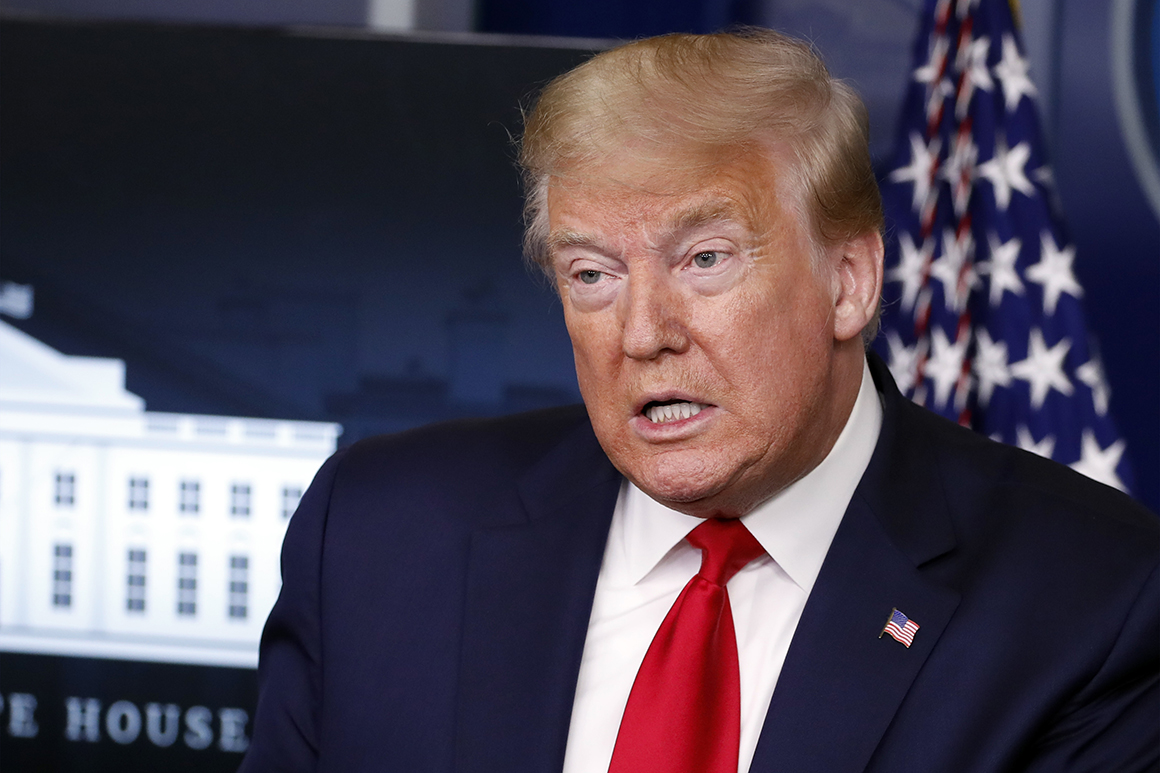 Trump emphasized he was instructing governors to allow places of worship to resume operations “right now,” and warned that “if there’s any question, they’re going to have to call me — but they are not going to be successful in that call.”

It is unclear whether the president is legally empowered to compel the nation’s governors to take such an action. If the White House moves to enforce his order in defiance of opposition by local officials, Trump could force a constitutional clash over one of the fundamental freedoms enshrined in the First Amendment.

Challenged on Trump’s authority to unilaterally reopen places of worship, White House press secretary Kayleigh McEnany said at the briefing Friday the administration would “leave it to faith communities to reopen,” and pointed to “detailed guidance” from the federal government “about the way you can clean your facility [and] promote social distancing.”

But soon after his remarks at the White House, the president was confronted with resistance from state and local executives. Rhode Island Gov. Gina Raimondo said she would not alter her state’s plans to reopen places of worship on May 30, and Chicago Mayor Lori Lightfoot also announced her city would ignore Trump’s demand.

“By no means can the president order any locality, any state to do something that he doesn’t have the power to do,” Lightfoot said. “And he can’t do that here.”

The CDC’s guidelines, released after weeks of internal debate and scrutiny over leaked drafts, offered detailed measures for how places of worship can start to safely reopen, while advising them to consult with state and local authorities. In contrast with the earlier leaked guidelines, the agency didn’t recommend a phased reopening and instead laid out recommendations for how faith-based communities can promote safety, hygiene and social distancing.

For instance, the agency suggested groups consider suspending or decreasing how often choirs are used, as well as congregant singing and chanting during a service “if appropriate within the faith tradition.” It also recommended temporary limits on sharing religious objects, like books or cups, and to instead photocopy or email prayers to attendees.

Public health experts have expressed concern about the risks related to reopening places of worship. At least two churches in Georgia and Texas that had recently reopened shut down again this week after members tested positive for the virus, and a report from the CDC earlier this week documented how an early March outbreak in a rural Arkansas church spread from a pastor and his wife to about three dozen parishioners, killing three.

Still, Trump insisted Friday that Americans are nevertheless “demanding to go to church and synagogue or to their mosque,” and he predicted “the ministers, pastors, rabbis, imams and other faith leaders will make sure that their congregations are safe” when they gather.

“They don’t want anything bad to happen to them or to anybody else,” Trump said. “The governors need to do the right thing and allow these very important, essential places of faith to open right now, for this weekend. If they don’t do it, I will override the governors. In America, we need more prayer, not less.”

Deborah Birx, the White House coronavirus response coordinator, stressed the importance of practicing mitigation measures as places of worship reopen, and said community faith leaders should be in touch with their local health departments.

“I think what we are trying to say with the CDC guidance is there is a way for us to work together to have social distancing and safety for people, so that we decrease the amount of exposure that anyone would have to asymptomatic [people],” she said. “And I see it that way because I know all of you and all of Americans, if they didn’t feel well, they wouldn’t go to church that day.”