Trump declares state of emergency in coronavirus-paralysed US 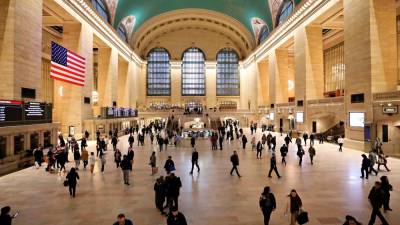 WASHINGTON: US President Donald Trump declared a national emergency in what critics say was a long-delayed admission of the gravity of the coronavirus crisis that has triggered the shutdown of schools, sporting events, offices and travel in the world’s richest country.

The House of Representatives early Saturday also overwhelmingly passed a coronavirus relief package backed by Trump which will provide for paid sick leave and free coronavirus tests for Americans affected by the outbreak.

“Look forward to signing the final Bill, ASAP!” Trump tweeted before the 363-40 bipartisan vote on the bill which will now move to the Senate.

With the US toll now at 47 dead and more than 2,000 infected, the coronavirus is wreaking havoc on daily life – and Trump has struggled to show that he is in charge.

In the economic and cultural engine of New York, the state’s governor restricted gatherings of more than 500 people. Iconic cultural institutions including Broadway went dim.

In California even small events were only to proceed if organizers could ensure six feet (two meters) of space between participants, with gatherings of more than 250 people banned through the end of the month.

Governors nationwide took similar steps, with many declaring states of emergency and shuttering schools and campuses, as millions of students from primary age to university moved to virtual classrooms.

The Pentagon said all its military and civilian personnel would be banned from domestic travel from Monday to help stop the spread of the coronavirus.

Millions of office workers were also being asked to work from home in a bid to slow the spread of the virus. A ban on travelers from most of the European Union came into force Saturday, contributing to the near emptying of airports.

The coronavirus also forced a slowdown just as the US election was heating up, with Democratic rivals Joe Biden and Bernie Sanders canceling rallies and Louisiana becoming the first state to postpone its primary election next month.

“The next eight weeks are critical,“ Trump said in the White House Rose Garden. “We can learn and we will turn a corner on this virus.”

His press conference came after a widely panned national address on Wednesday, in which Trump not only failed to calm growing nerves but delivered serious factual errors.

But Trump once more insisted that the US response has been faultless, brushing off fierce criticism over his persistence in downplaying the coronavirus danger and the slow rollout of testing for the virus.

“I don’t take responsibility at all,“ he said, adding that he’d inherited a system that was not prepared.

Trump surprised reporters by reversing his insistence on not needing to be tested for coronavirus or going into self-quarantine, following his contact with numerous politicians who since took the precautionary measure.

Acting Brazilian ambassador Nestor Forster was the second Brazilian to test positive among a group who visited the president’s Mar-a-Largo resort in Florida last weekend. He had sat at Trump’s table for dinner.

Trump surprised reporters at the press conference by saying he’ll “most likely” get a test for the virus, reversing his position from only minutes earlier.

But his White House doctor later said Trump “remains without symptoms” and did not need to be tested.

Baseball fans got news that the 2020 season would be postponed, after the NBA stunned fans by announcing an indefinite suspension of the basketball season. The PGA Tour, Major League Soccer and the National Hockey League all followed suit.

“Baseball means spring and sunshine to me, and now I won’t have that,“ the 31-year-old told AFP.

The sweeping cancellations, suspensions and lockouts is unprecedented in the history of modern US sports, with only the shutdown following the Sept 11, 2001 attacks coming close.

The entertainment industry is girding to weather a similar blow, with major institutions from New York’s Broadway to California’s Disneyland shutting down.

It was a glum morning in New York’s Times Square, where Tara Woods, 28, and Chynna Scott, 27 from Melbourne were kicking off what they had hoped would be a week of sightseeing.

“We were expecting some disruption but we weren’t sure how much,“ Woods said.

“We didn’t know Broadway was closed. That sucks!”

Nearly all of New York’s top performance halls and museums were shuttered, a trend seen nationwide.

Major festivals have already been canceled or postponed, including California’s desert music fest Coachella which is pushed back until October. — AFP