Trump gets stung from all sides after floating injections of... 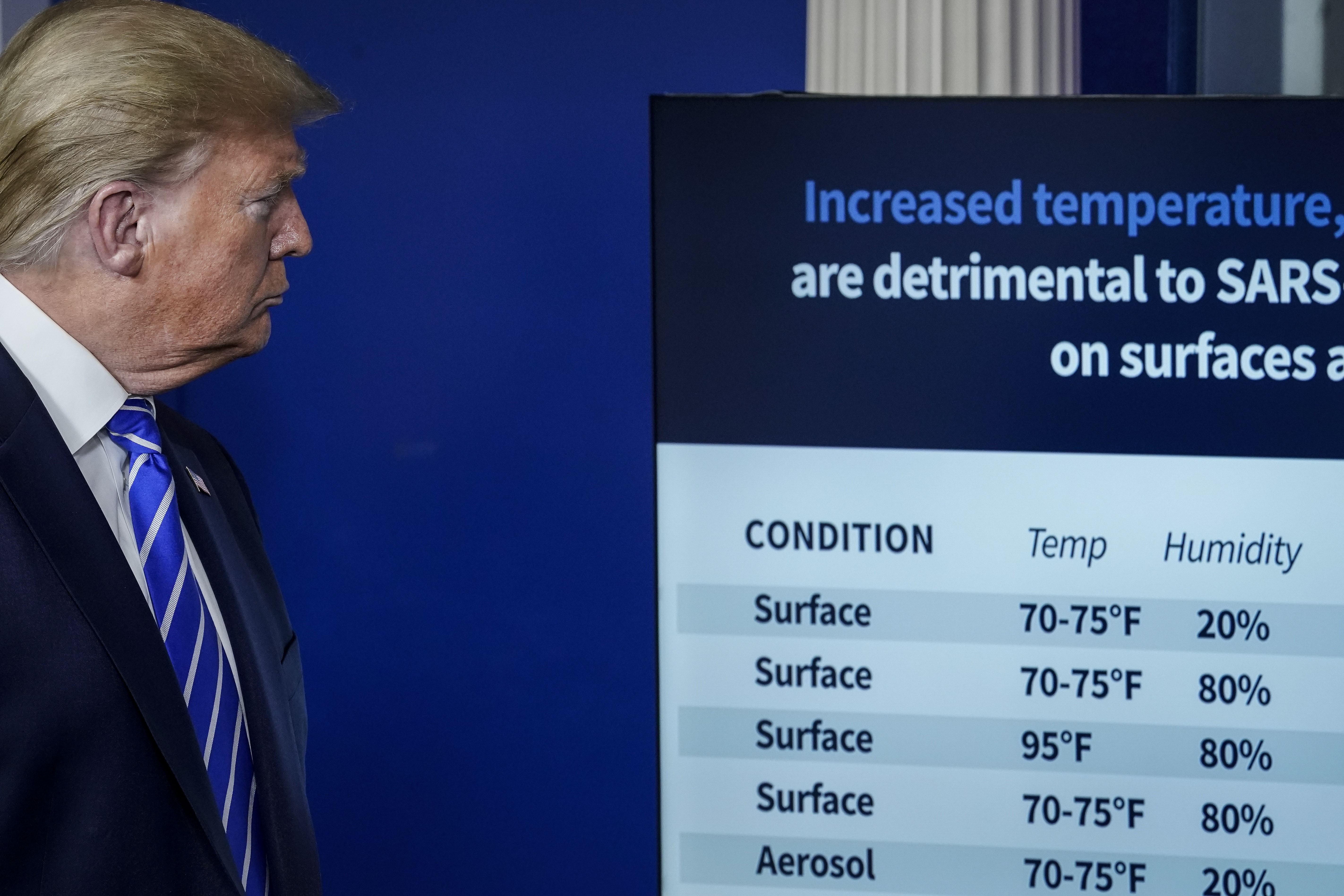 President Donald Trump’s suggestion that Americans should inject themselves with household disinfectants as a coronavirus remedy provoked an apparently universal rebuke Friday — including from congressional lawmakers, the medical community and the makers of the cleaning products themselves.

Reckitt Benckiser, the British company responsible for distributing Lysol, warned against the “internal administration” of bacteria-killing chemicals in a news release that made mention of “recent speculation and social media activity.”

The statement from the multinational consumer goods firm came after the president floated dangerous treatment theories at a White House news conference Thursday evening, and urged administration officials to explore the potential application of disinfectants to Covid-19 patients.

But quizzed on his proposal Friday, Trump falsely claimed he was in fact “asking a question sarcastically to reporters” about the efficacy of disinfectants, “just to see what would happen.”

That explanation contradicted a statement released hours earlier by White House press secretary Kayleigh McEnany, who argued the widespread criticism Trump received for his comments was unwarranted and accused the news media of distorting the president’s message.

“President Trump has repeatedly said that Americans should consult with medical doctors regarding coronavirus treatment, a point that he emphasized again during yesterday’s briefing,” McEnany said. “Leave it to the media to irresponsibly take President Trump out of context and run with negative headlines.”

McEnany’s defense of the president, however, did not reflect the reality of the Trump’s remarks Thursday, which explicitly encouraged further scientific study of the use of disinfectants on those who had fallen ill with the coronavirus.

“And then I see the disinfectant, where it knocks it out in a minute. One minute. And is there a way we can do something like that, by injection inside or almost a cleaning?” Trump said. “Because you see it gets in the lungs, and it does a tremendous number on the lungs. So it would be interesting to check that. So you’re going to have to use medical doctors with — but it sounds interesting to me.”

Although the president clearly directed those queries at the briefing to Bill Bryan, the acting undersecretary of Science and Technology at the Department of Homeland Security, he insisted at a White House event Friday that they were meant for reporters.

Still, the president seemingly struggled to settle on a preferred version of events, saying he actually meant for Bryan to investigate whether using disinfectant on hands would be beneficial and that “Bill has gone back to check that in the laboratory.”

Regardless of the intent behind Trump’s statements, they compelled the American Cleaning Institute, which represents the manufacturers and formulators of various cleaning products, to publish a news release Friday “in response to speculation about the use of disinfectants in or on one’s body.”

“Disinfectants are meant to kill germs or viruses on hard surfaces. Under no circumstances should they ever be used on one’s skin, ingested or injected internally,” the ACI said. “We remind everyone to please use all hygiene, cleaning and disinfecting products as directed in order to ensure safe, effective and intended use of those products.”

Even Surgeon General Jerome Adams appeared to caution against the president’s advice, reminding Americans in a tweet to “PLEASE always talk to your health provider first before administering any treatment/medication to yourself or a loved one.”

“Your safety is paramount, and doctors and nurses … have years of training to recommend what’s safe and effective,” Adams wrote.

Rep. Will Hurd of Texas was one of the first Republican lawmakers Friday to break with the White House over Trump’s enthusiasm for disinfectants, saying elected officials should “leave the guidance on health to health professionals.”

“Nobody should drink disinfectant,” Hurd told MSNBC. “I think that’s pretty clear, and we should be listening to doctors and scientists on this issue. I’m not listening to any politician on health-related issues.”

Nevertheless, the Maryland Emergency Management Agency reported Friday having “received several calls regarding questions about disinfectant use” and the coronavirus. “This is a reminder that under no circumstances should any disinfectant product be administered into the body through injection, ingestion or any other route,” the agency tweeted.

The president’s controversial comments at Thursday’s briefing were not the first time he has doled out dubious prescriptions for fighting the coronavirus.

Trump fiercely championed hydroxychloroquine, a decades-old malaria medication, since the early days of the disease’s outbreak in the United States, but conspicuously refrained from invoking the drug during public appearances in recent weeks.

A nationwide study of hydroxychloroquine’s use in U.S. veterans hospitals released Tuesday revealed there were more deaths among Covid-19 patients given the drug versus standard care, and the Food and Drug Administration warned Friday that hydroxychloroquine and chloroquine should be used only in hospitals or clinical trials because of dangerous side effects.

Another drug often advocated by the president, the antiviral medication remdesivir, also showed no benefit in results from a clinical trial that were mistakenly posted to the World Health Organization’s website Thursday.

Meanwhile, the federal government has been working to stop Americans from peddling bleach as a coronavirus treatment.

Earlier this month, the FDA and the Federal Trade Commission sent a letter to the Genesis II Church of Health and Healing ordering a halt to sales of its “Miracle Mineral Solution” — made of chlorine dioxide, or bleach — as a cure for Covid-19. The church responded in an open letter to the two agencies, stating emphatically that it had no plans to comply.

“I respect President Trump but not your proven corrupt agencies!” the letter read. “He is getting bad counsel like Haman gave King Ahasuerus. Haman ended up hanging because his deception and so will your agencies! I would welcome a call from President Trump to express my grievances!”

A week after the letter was published, the Justice Department went to court and asked a federal judge to temporarily ban Genesis II from selling its bleach miracle cure. The department’s complaint noted that Genesis II also claims its bleach can heal autism, brain cancer and multiple sclerosis.

Judge Kathleen Williams in the Southern District of Florida sided with DOJ, the FDA and the FTC, issuing a temporary restraining order last week blocking Genesis II from selling its solution.

In addition to disinfectants, the president on Thursday promoted the potential therapeutic effects of different types of light in treating the coronavirus, using the unfounded hypothesis to bolster his assertions that the outbreak could be blunted by the warmer weather of the summer season.

“So, supposing we hit the body with a tremendous, whether it’s ultraviolet or just very powerful light — and I think you said that hasn’t been checked, but you’re going to test it,” Trump said. “And then I said, supposing you brought the light inside the body, which you can do, either through the skin or in some other way — and I think you said you’re going to test that, too. Sounds interesting.”

Trump also directed those remarks to Bryan, the DHS official, who described for reporters recent research on how sunlight, heat and humidity affect the coronavirus on surfaces.

But Bryan said the study did not examine sunlight as a possible treatment, adding that the work had not been peer-reviewed and that its findings should not detract from federal social distancing guidance and other mitigation measures.

“It would be irresponsible for us to say that we feel that the summer is just going to totally kill the virus, and that it’s a free-for-all, and that people ignore those guidance,” Bryan said. “That is not the case.”

Trump also asked Dr. Deborah Birx, the White House coronavirus response coordinator, whether “the heat and the light” could help heal Covid-19 patients. “Not as a treatment. I mean, certainly, fever — is a good thing. When you have a fever, it helps your body respond. But not as — I’ve not seen heat or light,” Birx said.

The White House on Friday morning revised its official transcript of Thursday’s news conference to edit that particular exchange between Trump and Birx, after inaccurately reporting in its initial record of the briefing that she had agreed with the president. “That is a treatment,” Birx was quoted as saying in the first draft of the transcript, before the document was altered to reflect her corrected statements.

after, Disinfectants, floating, from, gets, injections, sides, stung, Trump