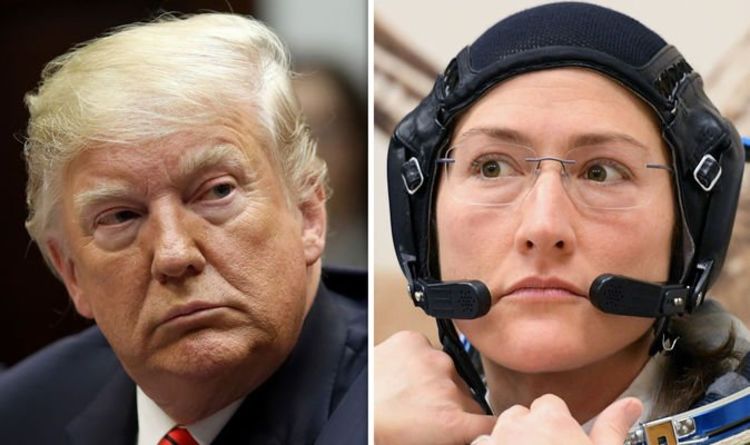 A delay in connection between Trump and the space station made for a short period of silence, before Ms Meir made it clear that she and Koch were not the first female spacewalker.

The first female spacewalk, in fact, took place in 1984 and 14 more have since followed.

The mistake came as Trump sat at a table in the White House with his daughter Ivanka Trump and Vice President Mike Pence sat either side of him, as well as a handful of NASA officials and a group of Girl Scouts in the background.

Staring intently into the camera, Trump said: “This is the first time for a woman outside of the space station.”

He added: “You are amazing people; they’re conducting the first ever female spacewalk to replace an exterior part of the space station.

“They’re doing some work, and they’re doing it in a very high altitude — an altitude that very few people will ever see.”

Ms Meir can then be heard correcting the President, explaining that the event marked the first time two women had been outside the spacecraft at the same time.

Ms Meir said: “We don’t want to take too much credit because there have been many other female spacewalkers before.

The pair moved to the space station’s P6 truss at the far end to begin work.

The spacewalk was streamed live by NASA and is a landmark for female astronauts.

Ms Koch had already carried out four spacewalks on the space station.

For Ms Meir, however, it was the first time venturing out into the void.

The all female space walk had happened farther on into the year than was initially expected.

The mission was planned for March but one of the astronauts was replaced by a man because her space suit didn’t fit.

Ms Koch, an electrical engineer, and Ms Meir, who has a doctorate in marine biology, stepped outside in their NASA space suits at 11:38GMT (07:38EDT) on Friday.

Many prominent female figures in the US held the space walk in high regard as an event of national and international significance.

US senator Kamala Harris wrote on Twitter: “For the first time in our nation’s history, an all-female crew walked in space today.

“It’s more than historic—it’s a reminder that for women, even the sky doesn’t have to be the limit.”

Kathy Sullivan, the first American female spacewalker, who carried out her mission 35 years ago, said she was delighted by yesterday’s milestone.

A NASA spokesperson added: “Our achievements provide inspiration to students around the world, proving that hard work can lead you to great heights, and all students should be able to see themselves in those achievements.”