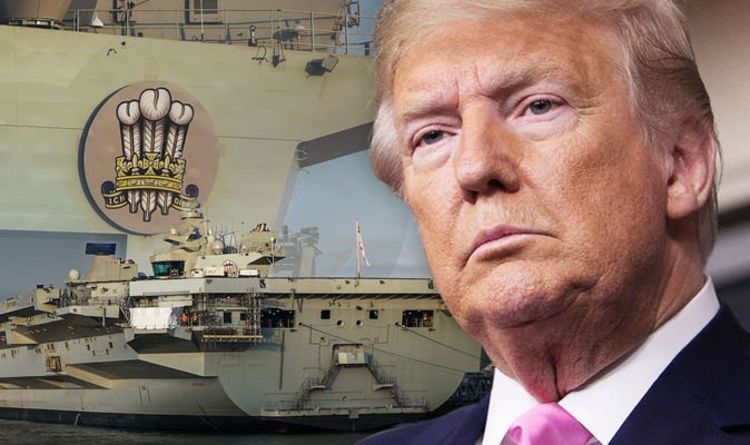 The state-of-the-art Royal Navy carrier will make her way to Liverpool Cruise Terminal at around 2pm via the River Mersey, and is to be welcomed by thousands of visitors. Prince Charles and the the Duchess of Cornwall boarded the ship at its official unveiling in Portsmouth in December – where they inspected a royal guard made up by the ship’s company. The ship weighs 65,000 tonnes and is armed with the latest generation close-in weapon systems.

It holds anti-aircraft and anti-missile defence and is radar controlled, meaning it automatically detects, tracks and engages incoming threats.

As well as this, on board is a cannon that can fire up to 4,500 shots per minute.

Given its impressive technology, former British Admiral and Labour peer – Lord Alan West – has claimed that Donald Trump’s US forces are incredibly jealous of the Royal Navy.

He also lauded the two new carriers as huge boosts to the UK’s forces.

Lord West told Express.co.uk: “It is massive, they are incredible, the Americans are very jealous of it and it means we are able to reduce the manpower quite dramatically.

“In an American carrier, the weapon managing facilities takes 300 men, in our ships it is something like 30 men.

“The US are very envious of what we have got. They are also around half the cost of American ships – they are amazing ships and we should be incredibly proud of our vessels.”

Lord West also described how the UK’s forces are “miles ahead of Russia and China”.

While the former Admiral is delighted with the Royal Navy’s latest additions, he still warns that spending on defence has been neglected for too long and that more must be done in the “dangerous world we live in”.

Before December’s election, he accused the Conservative government of failing to sufficiently fund British forces.

He told Express.co.uk in November: “The Conservatives want to keep their heads below the parapet, defence is the last thing the Government wants to be a big issue to be debated in this election. It’s not a vote winner, it’s only a vote winner when suddenly there is a war and we are about to be defeated.

Lord West has now claimed that the latest Ministry of Defence Review has positives but believes the Government could go even further.