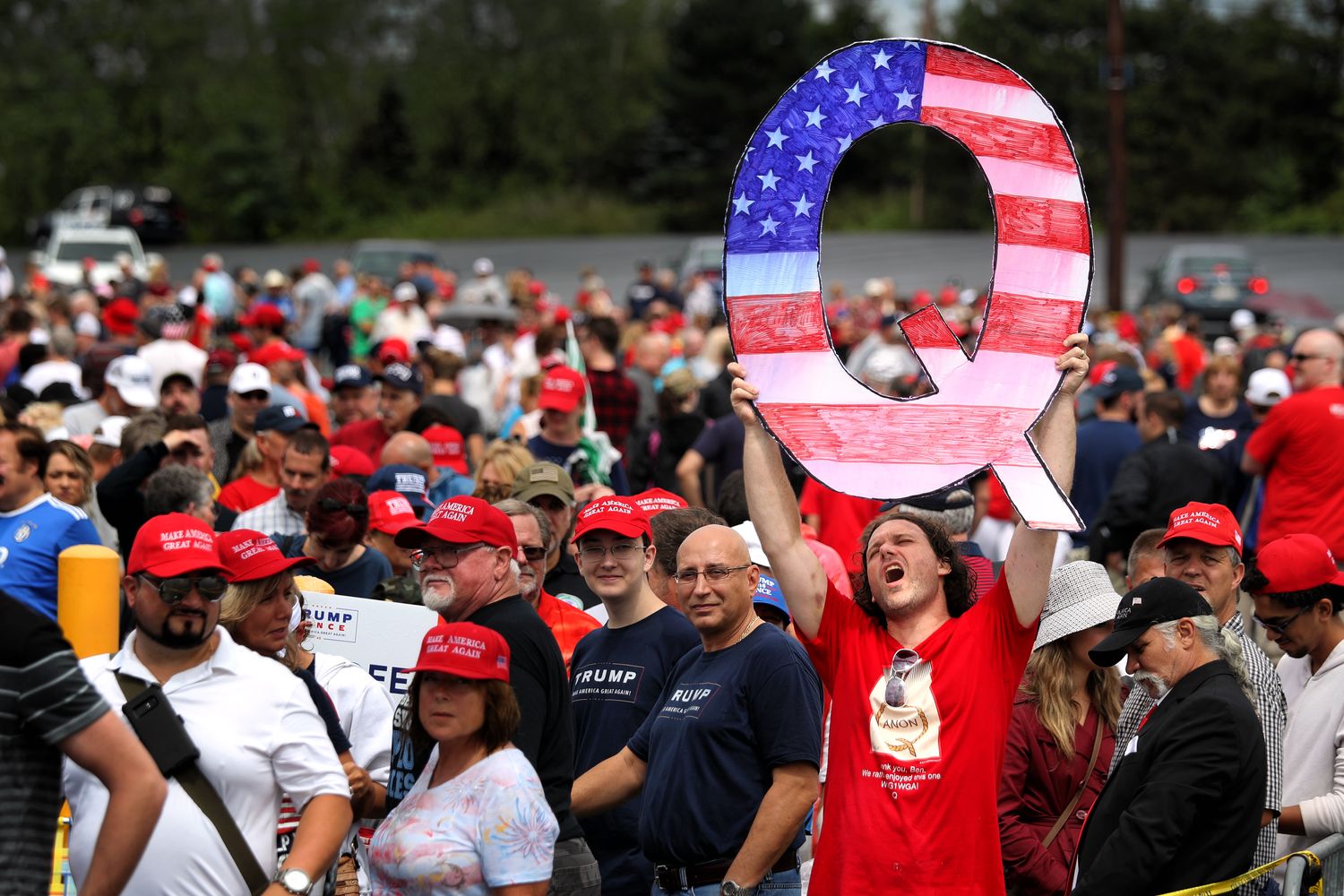 Those around Trump have followed suit. Eric Trump, the president’s son, recently posted a giant “Q” on Instagram as well as the hashtag version of the community’s slogan: “Where we go one, we go all.” White House deputy communications director Dan Scavino sparked glee on Facebook when he posted a photo with Q symbology in it back in March. Over on Parler, the niche Twitter alternative and MAGA hub, Rep. Devin Nunes of California, one of Trump’s most strident congressional defenders, directed people to The Dirty Truth, a video producer who has promoted QAnon-related conspiracies in the past.

And over that July Fourth weekend, Michael Flynn, Trump’s first national security adviser, recorded a video of himself taking the QAnon loyalty pledge, a slightly altered version of the U.S. oath of office.

All this has occurred with barely any pushback from Trump or Republican leaders — or even much acknowledgment that the phenomenon exists. And the engagement has continued even as the FBI has labeled the amorphous online community a potential source of domestic terrorism after several people radicalized by QAnon have been charged with crimes, ranging from attempted kidnapping to murder, inspired by the conspiracy theory.

To Trump’s critics, the reason is simple enough: QAnon followers are some of Trump’s biggest boosters. They show up at rallies. They promote the president’s narrative online, even coming up with their own conspiracy theories to protect him. And as the president struggles in the polls amid criticism over his handling of the coronavirus pandemic and response to nationwide protests over police killings, there are political benefits to engaging Trump’s most fervent fan base.

“It’s easy enough for them to say OK, well, because of that, we can accept this other crazy level of behavior because those people love the president,” said Rick Wilson, a former GOP strategist and co-founder of the Trump-critical Lincoln Project. “They unequivocally support Donald Trump.”

For the uninitiated, QAnon refers to a conspiracy theory centered on the existence of a shadowy government official known simply as “Q,” who communicates with his followers through various online channels, dropping cryptic, Nostradamus-esque notes hinting at the elite’s secret machinations. QAnon alleges that the global elite, all part of a pedophile sex trafficking ring in Washington, are responsible for an amalgamate of baseless conspiracies, ranging from the murder of a Democratic National Committee staffer to widespread satanic worship and deliberately spreading the novel coronavirus.

In the QAnon mythos, Q and Trump are working toward an event called “The Storm,” the day that he finally arrests thousands of these elites and ships them to Guantanamo Bay. Occasionally, QAnon followers see various setbacks as The Storm in action; others have attempted to explain the lack of mass indictments through science fiction.

“Supposedly, I’m already in Gitmo and my clone is speaking to you right now,” Wilson said.

QAnon followers are hungriest for signs that the Trump administration is watching them — an errant hand-wave, for instance, can result in hundreds of followers insisting that Trump had drawn a “Q” to acknowledge them. But rather than leave it in the realm of “Da Vinci Code”-esque symbology, Trump’s actions, as well as his repeated insistence that the “deep state” is conspiring against him, have given them even more reason to believe in him.

And to QAnon followers, Trump’s regular retweeting of their messages indicates that he or someone on his team is acknowledging their work.

What’s more, his staffers have indicated their familiarity with QAnon content, too. Trump campaign manager Brad Parscale retweeted content from The Dirty Truth in the past. Trump personal lawyer Rudy Giuliani has retweeted posts with actual QAnon hashtags. Prominent QAnon boosters have made their way into the White House as well, such as Bill Mitchell and Michael William Lebron.

The White House did not comment. The Trump campaign did not respond to a request for comment.

Over the destabilizing crises of the past several months — Covid-19, mass protests over racial injustice and a divisive conversation over removing symbols honoring Confederate leaders — QAnon’s influence in Washington has tracked upward. At least two GOP congressional candidates with histories of promoting QAnon-related claims on social media are likely headed for a seat in Congress.

Notably, the Republican Party has not addressed those claims. Lauren Boebert, a restaurateur who won an upset victory over a five-term GOP incumbent in Colorado’s 3rd District, garnered the National Republican Congressional Committee’s endorsement, despite previously saying that she had “hope” that QAnon was “real”. She has declined to disavow that statement.

And when several House Republicans withdrew their endorsements of QAnon supporter Marjorie Taylor Greene, who beat her nearest primary opponent in Georgia’s heavily Republican 14th congressional race by over 20 points and is headed towards a runoff, they cited her racist attacks on Muslims and Black activists, as well as her anti-Semitic remarks — but not her belief that QAnon is a real person. Other Trump defenders in the House GOP caucus, like Jim Jordan of Ohio and Andy Biggs of Arizona, did not pull their endorsements after her racist comments surfaced.

Travis View, a researcher who tracks conspiracy theories and hosts the QAnon Anonymous podcast, called their approach a “middle way” in the conservative world, navigating the gray zone between Q debunkers in Trump’s orbit, like Sebastian Gorka, and Q acolytes like comedian Roseanne Barr, who has tweeted her belief that Trump was breaking up child sex trafficking rings.

“They’ve done absolutely nothing to discourage QAnon followers from believing as they do,” said View — a position that only stokes the community’s fervor more. “I mean, QAnon is premised on the idea that there is a secret plan to save the world, so they take the silence more as part of that secrecy.”

Then again, going on the offensive against Q might not do much. Gorka, a former White House official and Trump loyalist, himself became the target of QAnon attacks after he called the community “garbage” in 2019. Q followers started posting his home address and claiming, without evidence, that he had engaged in various crimes. Even top conspiracy figures like Alex Jones of Infowars, who claims QAnon is actually a deep state disinformation plot to mislead Trump voters, are not safe from the QAnon community’s wrath.

“The whole community is volatile,” said Angelo Carusone, president of Media Matters for America, who has tracked QAnon since its beginning in 2017. “They expect not just loyalty, but they have expectations in terms of behavior that are extraordinarily suspect and susceptible to feeling like they’re being betrayed — or alternatively, feeling like there’s some shadowy puppet master rigging things.