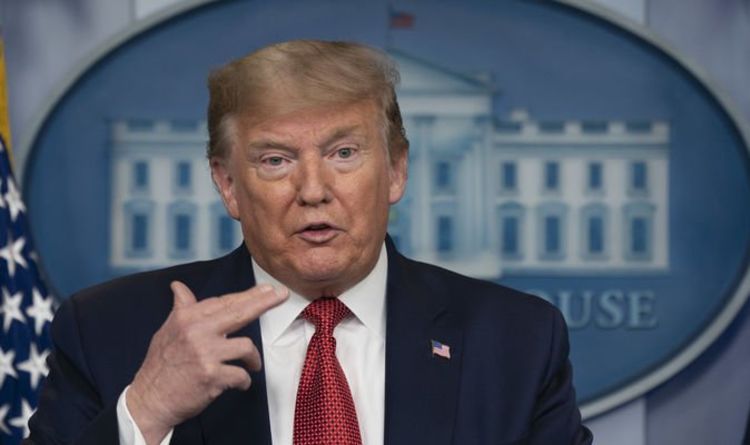 Donald Trump hit out at the Obama administration for the swine flu crisis which killed around 17,000 US citizens in 2009. According to the latest figures, coronavirus has killed more than 35,000 Americans since the outbreak began – more than double the number of casualties to swine flu.

In a rant on Twitter, Mr Trump branded the former US President’s handling of the swine flu crisis as incompetent and hit out at the Obamacare medical programme.

Mr Trump wrote on Twitter: “Biden/Obama were a disaster in handling the H1N1 Swine Flu.

“17,000 people died unnecessarily and through incompetence!

“Also, don’t forget their 5 Billion Dollar Obamacare website that should have cost close to nothing!”

Mr Trump waged his attack on Mr Obama just days after the former US President formally endorsed Mr Biden in the 2020 election.

In October 2009, Mr Obama declared a national emergency due to the swine flu outbreak.

According the US Centers for Disease Control and Prevention (CDC) there were more than 60 million cases of swine flu in the US between April 2009 and April 2010.

Swine flu is a respiratory disease caused by type A influenza virus in pigs.

The virus is transmitted when an individual touches an object coughed or sneezed on by an infected person.

In the White House on Thursday the US President outlined his three stage plan to end the coronavirus lockdown and get the US moving once again.

The 18-page document titled “Opening Up America Again” outlines the gradual lifting of restrictions across the 50 US states.

In the first phase of re-opening, the guidelines say groups of more than 10 people should be avoided if appropriate distancing measures are not practical.

Schools will remain closed but large venues such as movies theatres, restaurants, stadiums, and places of worship can open with “strict physical distancing protocols.”

Mr Trump said: “We are not opening all at once, but one careful step at a time.

“A prolonged lockdown combined with a forced economic depression would inflict an immense and wide-ranging toll on public health.”

The US President is facing pressure to get the US economy moving once again after the coronavirus shutdown left millions of Americans jobless.

More than 20 million people have filed for unemployment in the US in the past month – a national record.