Trump ordered states to open churches. Can he do that? 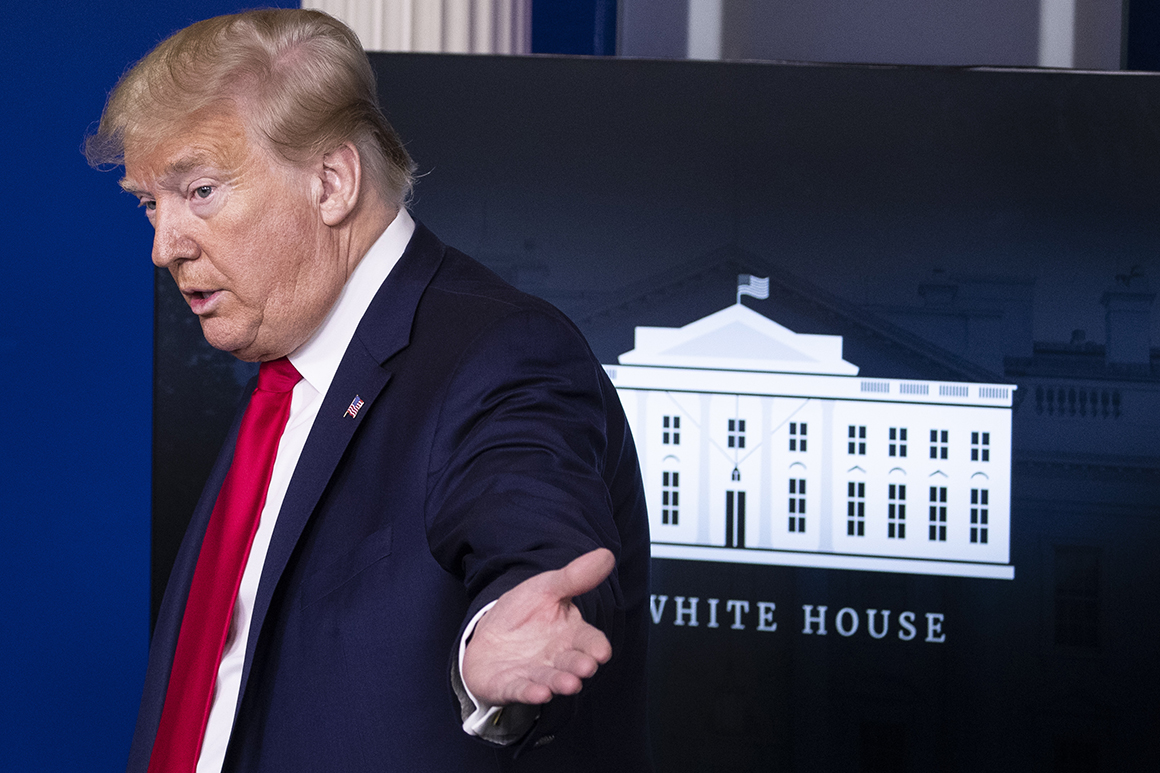 “There may have been few lawsuits filed, but there have been a lot of back-channel, government-to-government calls made,” Zachary Terwilliger, the U.S. Attorney based in Alexandria, Va., told POLITICO. “Folks have decided to stand down once they realize we’re serious and this is not just rhetoric.”

Terwillinger welcomed Trump’s statements Friday and said the idea that churches are essential has a compelling, common-sense logic to it.

“If we’re in a situation where we’ve got Wal-Mart open with social distancing, why not church? This is essential for some people…. This is as essential as a liquor store, as essential as a tattoo parlor,” the prosecutor and former senior Justice Department official said.

Critics said Trump’s comments may not have been tied to any federal action, but rather to encourage churchgoers and ministers to defy state officials, precipitating on-the-ground conflicts and bad publicity that governors would likely avoid by softening their virus-related activity bans.

Trump’s drive to re-open churches comes despite a growing body of evidence tying church services to serious outbreaks of coronavirus. Just Tuesday, the Centers for Disease Control released a warning about Arkansas church meetings in March where more than a third of 92 attendees wound up infected. Another 26 members of the community wound up hit by the virus. Four people died.

Similar church-focused outbreaks have been reported in Washington state, South Korea and France. Experts theorize that hand-holding, singing and the fellowship typical of church services create robust vectors to transmit the virus, particularly through airborne droplets.

Laser said those episodes undercut the notion that going to church is just like going to the liquor store or Home Depot. “If you start to think about the activity, it’s very different than going to purchase whiskey,” she said. “Liquor stores don’t exist as community places of gathering where there are going to be exchanges of germs…The distinction is based in public safety.”

One is that Trump and other federal officials have declared states of emergency over the pandemic that remain in effect. The Justice Department itself has relied on the threat posed by the outbreak to justify a series of extraordinary measures taken by the Trump administration, like shutting down processing of many asylum claims.

Even as they seek to second-guess aspects of state and local policies, DOJ lawyers have taken care not to dispute that there is a severe threat to public health.

Romero said the Trump administration’s efforts reek of hypocrisy and politics. “On the one hand, they want to say churches should be open for prayer. On other hand, they allow lawful abortion clinics to be shut down. The hypocrisy in choosing what states’ rights they will challenge which ones to acquiesce to is completely rooted in their own partisan agenda,” the ACLU executive director said.

Another challenge for the feds is that many states and local governments traditionally have more legal latitude to issue orders and regulations that affect religion than the federal government does.

The Religious Freedom Restoration Act passed by Congress in 1993 gave churches and individuals the right to sue over even widely applicable laws that interfere with religion. However, in 1997, the Supreme Court ruled it was unconstitutional to apply the new federal law to states or municipalities. Some states have passed their own RFRA laws, but they don’t all go as far as the federal one.

Yet another hurdle is that the Justice Department typically conducts some investigation before filing a suit. Lawyers for religious-rights advocacy groups, on the other hand, can and have taken accounts from pastors and rushed to court for a restraining order within a matter of days or hours.

Organizations like the Alliance Defending Freedom, Liberty Counsel and the Thomas More Society, have embraced such cases with gusto, filing a slew of challenges across the country.

Laser said most of the efforts to win temporary restraining orders against the lockdowns have fizzled, but at least two federal appeals courts—the New Orleans-based 5th Circuit and the Cincinnati-based 6th Circuit—have stepped in to allow churches to proceed with their services.

Not all judges are convinced the legal challenges are even the business of federal courts or the Justice Department. The trial-court judge handling the Justice Department-backed suit a Virginia church brought against Northam said in an order Thursday that she believes the dispute belongs in state court, where the pastor can raise a First Amendment defense to the criminal citation he received.

“Although the existence of a pandemic might be considered extraordinary, it does not call for federal intervention in state proceedings,” Obama appointee Arenda Allen wrote, tweaking conservatives by adopting states-rights principles trumpeted decades ago by opponents of the civil rights movement.

“If anything, the once-in-a-century nature of a pandemic strengthens the important state interests that counsel against federal intervention,” she added.

As Trump spoke out on the issue Friday—both at an appearance in the briefing room and to veterans staging an annual Memorial Day motorcycle rally in Washington—the Justice Department did mount what appeared to be a flurry of activity. Terwilliger issued a press release saying the department is “assessing its options” for joining in the Virginia church’s appeal of Arenda’s refusal to issue a restraining order and preliminary injunction in that case.

Also Friday, the U.S. Attorney in Los Angeles sent a letter to Los Angeles Mayor Eric Garcetti expressing concern about comments about possibly continuing lockdown orders there for months. And federal prosecutors in Illinois filed a new statement of interest in a state lawmaker’s suit against Gov. J.B. Pritzker over his stay-at-home orders.

“I think the Illinois filing today is pretty powerful evidence that this is all just for show. Not only is DOJ not initiating any cases itself, but it’s making a big deal out of showing up in some of these cases only to make technical arguments about state law,” said University of Texas law professor Stephen Vladeck. “It’s about as weak a federal intervention in these cases as could’ve been expected, and leaves one wondering if the point is just to make it look like the Trump administration is doing more than nothing.”

Romero said some of the department’s actions could backfire against the government. He noted that the letter to Garcetti is extraordinarily vague, but he vowed to leverage its call for a return to normalcy in some of the ACLU’s pending litigation on behalf of abortion providers.

“It doesn’t say anything, but it could be quite useful against states who want to close down abortion services,” the ACLU chief said.

Terwilliger defended the department efforts, saying they were ramping up in part because measures that might have been justified as the outbreak surged in March are now less justifiable as the virus recedes in most areas. State and local officials need to adjust, he said.

“There’s a difference between now and March 23,” he said. “The strategies and regulations need to take into account that we’re in a different place now.”