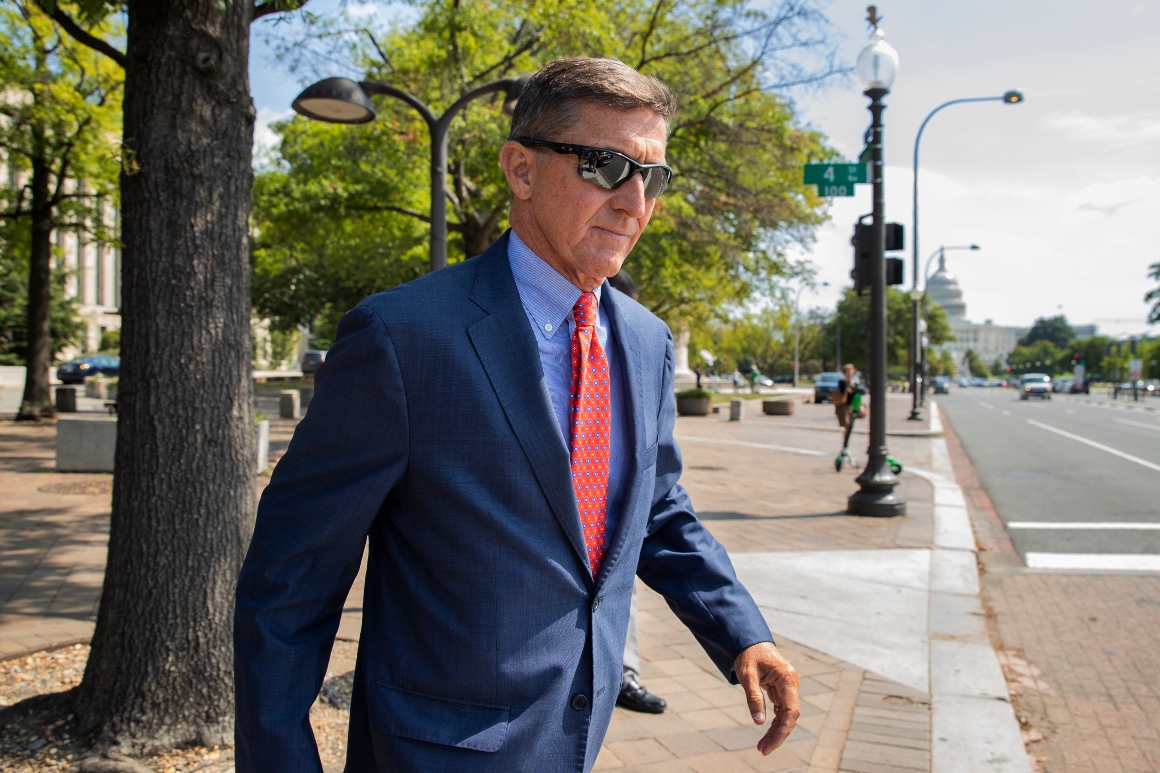 Before reversing course, Flynn initially cooperated with special counsel Robert Mueller for nearly two years, including by providing evidence of potential obstruction of justice by the president. He sat for 19 interviews with prosecutors.

Trump had long been expected to pardon Flynn, pummeling prosecutors and the FBI for their handling of the case, part of a concerted attack on the investigations against him. Trump has falsely accused the FBI and Justice Department of mounting a “coup” against him in the years after his election. Trump also repeatedly attacked prosecutors and FBI officials involved in the Flynn case, even though he fired Flynn for lying to both the bureau and Vice President Mike Pence in early 2017.

Though the pardon was long in the making, Trump allowed Flynn’s legal drama to play out for more than three years, waiting until after the Nov. 3 election to issue clemency, a signal of how politically explosive the case has become. Flynn has become a revered figure to Trump’s base, and Flynn’s attorney — conservative firebrand Sidney Powell — has recently become a prominent Trump surrogate promoting baseless conspiracy theories about election fraud against Trump.

Top Democrats have already warned they would consider any effort by Trump to pardon his associates to be an abuse of power, akin to the one the House impeached him for almost a year ago. After the pardon was issued, House Intelligence Committee Chairman Adam Schiff and House Judiciary Committee Chairman Jerrold Nadler slammed the decision as an erosion of the rule of law, meant to reward an ally for resisting an investigation that involved Trump himself.

Republicans, though, celebrated the decision. White House chief of staff Mark Meadows called it a “well deserved day for an American patriot.”

The pardon comes as a federal judge in Washington D.C., Emmet Sullivan, is weighing whether to allow Trump’s Justice Department to dismiss the charge against Flynn. Attorney General William Barr authorized the dismissal amid Flynn’s ongoing legal fight, alarming DOJ veterans worried that he had distorted the process to benefit a political ally of the president.

Sullivan, however, declined to immediately dismiss the case and instead sought an outside adviser, who argued that the Justice Department’s legal argument for dismissing the case should be rejected as a pretext for aiding a Trump ally. Sullivan has been weighing a final decision since late September, when he held a hearing and learned that Powell had been in contact with Trump about the case. Sullivan has also raised alarms about documents DOJ relied on in the case that appeared to have been altered, though Justice Department officials insisted the alterations were inadvertent.

It’s unclear if Sullivan will immediate end the matter or seek further inquiry about his options, given concerns he raised that Flynn may have lied under oath regarding the circumstances of his plea agreement.

Trump’s pardon is just his latest act of clemency for a close associate implicated in the Russia probe. He also attacked Justice Department prosecutors, including former members of Mueller’s team, who helped secure the conviction of longtime adviser and friend Roger Stone for lying to congressional investigators and intimidating a witness. In July, Trump commuted Stone’s sentence but has not issued a full pardon, though Stone has pleaded for one in recent days. Trump’s direct efforts on behalf of his associates threw the Justice Department into turmoil earlier this year, prompting Barr to issue what appeared to be a veiled threat to resign.

Nevertheless, Trump kept up his attacks on the Justice Department and the FBI, and Barr has remained quiet.

Flynn served as Trump’s national security adviser for just 24 days after Trump took office in 2017. Trump removed him amid a clamor of questions about Flynn’s contacts with Russia’s ambassador to the United States in the final days of 2016, while the outgoing Obama administration was leveling sanctions against Russia for the Kremlin’s election interference.

Nearly 10 months after Flynn’s departure, he pleaded guilty to lying to the FBI about those interactions, and admitted that he had also lobbied on behalf of the Turkish government — while advising Trump — without disclosing it.

But Flynn’s allies long maintained that Flynn had been set up by the FBI and tricked into pleading guilty. And when Sullivan, the judge in Flynn’s case, seemed poised in late 2018 to sentence Flynn to prison, Flynn shelved his cooperation strategy and fired his legal team.

He then fired his legal team and hired Powell, a Fox News favorite who once wrote favorably about Sullivan but has since relentlessly attacked him as biased. Flynn later moved to rescind his guilty plea and accused the FBI and Justice Department of entrapping him in order to pursue a case against Trump.

Flynn, a former director of the Defense Intelligence Agency under Barack Obama, first drew the eye of the FBI for his December 2015 visit to Moscow, where he was seated at a table with Russian President Vladimir Putin during a dinner hosted by the Russian TV network RT. When the FBI opened a counterintelligence investigation into figures connected to the Trump campaign in July 2016 — a probe codenamed Crossfire Hurricane — Flynn was one of the four Trump allies specifically identified as a potential threat.

Though documents disclosed amid Flynn’s effort to dismiss his case showed the FBI had been preparing to close the Flynn portion of the investigation by late 2016, the calls with Kislyak led the bureau to reverse course. On Jan. 5, 2017, Obama discussed the case with his national security team and asked whether he should be concerned about sharing sensitive information with the incoming administration. Obama had previously warned Trump against hiring Flynn, but Trump ignored the entreaty.

Trump fired Flynn just weeks into his new administration after being informed of Flynn’s alleged lies to both the FBI and Vice President Mike Pence, who said on TV that Flynn did not discuss sanctions with Kislyak.

Flynn was once expected to be a key witness at the trial last year of his former business partner, Bijan Rafiekian–better known as Kian. Indeed, that was the anticipated testimony that led Sullivan to put off his sentencing in December 2018.

However, following Flynn’s change of counsel, a heated dispute erupted between the new team and prosecutors about Flynn’s account. Prosecutors abruptly dropped plans to call Flynn, saying he seemed to be backing away from admissions in his plea about filing false declarations with the Justice Department about his Turkey-related work.

After a trial, jurors quickly convicted Kian — a California businessman and former George W. Bush appointee — of scheming to act as an unregistered foreign agent in connection with the project spearheaded by Flynn and targeting a Turkish dissident in the U.S., Fethullah Gulen.

However, Kian’s fortunes reversed two months later when the judge who oversaw the trial issued a rare ruling throwing out the convictions, saying evidence of his guilt was lacking. Despite Barr’s conclusion that the prosecution of Flynn was unjustified, the case against Kian continues, as prosecutors press an appeal of the judge’s ruling tossing out the case.

Trump had long flirted with pardoning Flynn. In fact, overtures from Trump’s personal attorney in 2017 figured into Mueller’s report cataloguing potential obstruction of justice by the president. Though Trump routinely attacked other witnesses who provided damaging information to Mueller, he never directed his fury at Flynn.