Trump personalizes the coronavirus — through a political lens 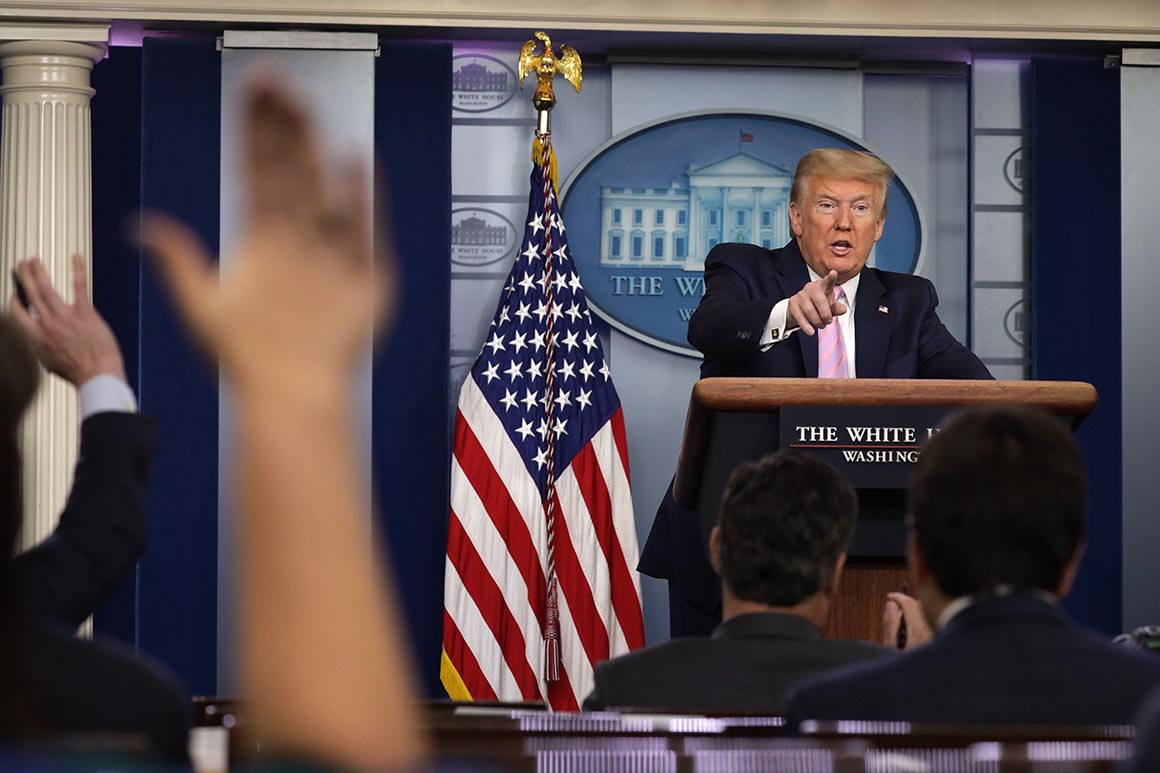 “Nobody takes things more personally than me,” Donald Trump once said on an episode of his reality television show, “The Apprentice.”

It’s a mantra Trump as president regularly uses as a political cudgel, a sentiment he inserts into his speeches or his banter with reporters to signal how much he cares.

With the coronavirus, though, things appear to be actually getting personal for Trump. After initially downplaying the burgeoning outbreak, the president’s tenor changed as he started reflecting publicly about a friend who was in a coma after becoming infected and recounting the chaos at a hospital near his childhood home in Queens. He’s repeatedly waxed about what it means to have the pandemic leaving society isolated on Easter, which the president has personalized as “a very special day for me.”

The coronavirus has also encircled the president, making it even more personal, with guests near Trump at his Mar-a-Lago resort testing positive, and political allies like British Prime Minister Boris Johnson falling ill.

“For Trump it was something that made him realize it could hit celebrity America, and I think that brought it more vividly alive to him than statistics,” said presidential historian Douglas Brinkley.

Yet Trump’s personalization of the crisis has another form, a “me vs. them” dynamic that critics say has caused Trump to favor those who are personal allies, or those who credit him personally.

It’s part of a broader pattern for the president — at times, he seems convinced of a cause only after he feels a personal connection. His involvement in regulating e-cigarettes, for instance, was spurred by the first lady’s pressure, and his remarks on the topic included rare anecdotes about his teenage son, Barron.

Presidents throughout history have dealt with speculation about how their personal histories color their reactions to history-making moments. When Trayvon Martin was killed, Barack Obama generated countless think pieces — and notable conservative anger — when he reflected, “this could have been my son.” George W. Bush felt the need in a post-presidency book to defensively insist that he hadn’t invaded Iraq to finish what his father started with Desert Storm.

With the coronavirus, Trump dropped his misleading comparisons to the flu after he saw the images coming out of Elmhurst Hospital in Queens, where the sudden influx of corpses were put into makeshift morgues, and after learning that a longtime friend, real estate mogul Stanley Chera, was admitted in the intensive care unit at New York Presbyterian Hospital from complications due to Covid-19, the illness the novel coronavirus causes.

“When you send a friend to the hospital, and you call up to find out how is he doing — it happened to me, where he goes to the hospital, he says goodbye,” Trump later elaborated. “He’s sort of a tough guy. A little older, a little heavier than he’d like to be, frankly. And you call up the next day: ‘How’s he doing?’ And he’s in a coma? This is not the flu.”

Trump said his friend’s experience didn’t impact his decision to extend the length of the White House social-distancing guidelines from two to six weeks. Instead, he pointed to the influence of models predicting over two million American deaths if the country did nothing to slow the virus. But the event did put a human face for the president on the disease’s viciousness.

“It has to hit you when he starts seeing his old neighborhood,” said Al Felzenberg, a presidential historian and lecturer at Annenberg School for Communication at the University of Pennsylvania. “I think that was a real change in his demeanor.”

Trump has personalized other elements of the crisis, though, leading to charges he is filtering the government’s response through a personal political lens.

For instance, he has turned some state requests for equipment into personal political battles.

After Michigan Gov. Gretchen Whitmer, a Democrat, went public with her frustrations over the lack of medical supplies coming from the federal government, Trump castigated her for “ineptitude.” Yet Trump has been receptive to personal overtures from Republican allies like Sen. Cory Gardner of Colorado, who made a direct phone call to the president to ask for medical equipment.

Trump also doles out well wishes to his political allies in quarantine or who have contracted Covid-19, but omits or cuts down his political opponents in similar situations.

One example came when Republican Sen. Mitt Romney, the only senator to vote to convict Trump on an impeachment count, tested negative for the coronavirus following potential exposure. In response, Trump sarcastically tweeted: “This is really great news! I am so happy I can barely speak.”

Romney had gone into isolation after Republican Sen. Rand Paul, a Trump friend, tested positive. Unlike Romney, however, Paul received regular, personalized well-wishes from the president.

More broadly, Trump uses his daily center-stage performance from the White House podium as a chance to register his personalized grievances — no one mentions his TV ratings, some governors aren’t grateful enough for his efforts, the media doesn’t give him enough credit.

When asked last Monday why there is a delay in coronavirus test results, Trump shot back at the reporter: “You should say, ‘congratulations, great job,’ instead of being so horrid in the way you ask a question.”

And repeatedly, Trump’s argument is that he takes things more personally, and cares more, than anyone. “Nobody’s more worried than me for the whole country,” he said in late March during a Fox News call-in interview.

It’s a pattern that Trump’s opponents have pounced on.

Even some Republicans have expressed exasperation that Trump doesn’t cede the stage more often to the specialists leading the response effort.

"I think he should leave — let the health professionals guide where we’re gonna go,” Republican Sen. Shelley Moore Capito of West Virginia recently told reporters on Capitol Hill, specifically citing Anthony Fauci and Deborah Birx, the two doctors who have become the White House’s main medical voices from the podium. “And so sometimes I think it goes off the rails a little bit, but you know that’s the way the president conducts business.”

Trump’s aides and allies aggressively defend the president, noting that he has sent palettes of equipment to numerous Democratic-held states, including Michigan. And Trump himself has stressed that he has had a mostly good working relationship during the pandemic with frequent Democratic adversaries, like California Gov. Gavin Newsom and New York Gov. Andrew Cuomo.

Brinkley said Trump’s sensitivities are now undercutting his desire to be seen as a “wartime president,” and that an initial failure to grasp the potential human toll of the virus contributed to a slow-footed response.

Trump, Brinkley said, “never really had an imagination of what the 1918 [flu pandemic] did to the United States, and how you can quickly lose hundreds of thousands of people.”

In total, 670,000 people died in the U.S. during the outbreak, with at least 50 million people worldwide losing their lives. Trump has lately started referencing those fatality totals recently as he discusses the coronavirus.

“Trump’s going to have to live down his early anemic response to the coronavirus,” Brinkley said, comparing Trump to Herbert Hoover, the president who oversaw the financial collapse that led to the Great Depression.

“But he’s now trying to be more like FDR which is, be funny, be optimistic, better days are coming,” Brinkley added, referencing Franklin Delano Roosevelt’s more amiable approach to communicating during trying times. “His first phase is Herbert Hoover, his second phase is FDR-lite.”