Trump promised a big announcement. Then he read off a long list of names. 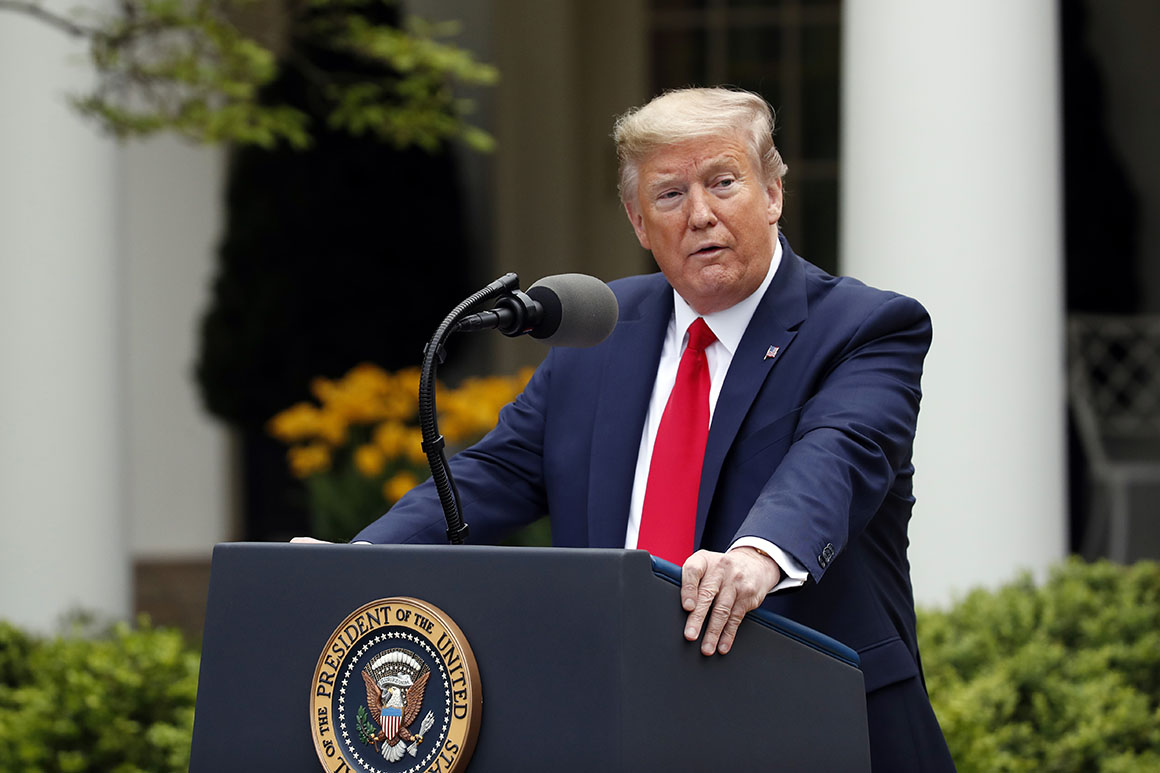 He spent days hyping it up. He built suspense. And he promised a big announcement.

When he finally unveiled his much-heralded new White House economic task force focused on reopening the economy, President Donald Trump read off a list of names. Dozens and dozens and dozens of names.

“Now, we have a list of people that I’ll be speaking to over the next very short period of time, in many cases, tomorrow,” Trump said. “We have a list of different industries that I’ll be discussing by, meeting by telephone, because we don’t want people traveling right now.”

Trump read off names of just about every leading corporation in America — all of whom he said would advise the administration in the coming weeks about how to reopen the economy from its coronavirus-induced shutdown.

After the president concluded his news briefing, the White House released a list of nearly 200 corporate executives, faith leaders and thought leaders broken out by sector in what the announcement called “Great American Economic Revival Industry Groups.”

“These bipartisan groups of American leaders will work together with the White House to chart the path forward toward a future of unparalleled American prosperity,” the statement said. “The health and wealth of America is the primary goal, and these groups will produce a more independent, self-sufficient, and resilient Nation.”

At no point did Trump or the White House explain the way the committees would work, or the types of suggestions they sought or the benchmarks the White House would use to determine whether it was safe to reopen shuttered businesses, send children back to school, reopen stadiums or resume work in offices.

Trump also did not indicate who would lead the effort emanating from the various industry groups from the White House; on Monday, the councils had seemed like a potential new project for chief of staff Mark Meadows. Throughout the past week there were also confusing signals about the involvement of senior advisers Jared Kushner and Ivanka Trump.

The back-and-forth deliberations over the “Opening Our Country Council,” as Trump called it at one point last week, laid bare for the American public the way decisions often are made in the Trump White House — through power struggles, the loose and very public airing of possible ideas and then the president making adjustments on the fly with a goal of having a big announcement.

National Economic Council Director Larry Kudlow said Tuesday the president would likely make an announcement later this week on when and how he intended to reopen the economy, a choice Trump has called one of the toughest decisions of his presidency.

Inside the White House, aides have been zeroing in on the estimates from the nonpartisan Institute for Health Metrics and Evaluation at the University of Washington, which show the U.S. is now past its peak outbreak and estimates that hospitalizations related to Covid-19 will start to rapidly decline beginning in late April.

Aides are reluctant to identify May 1 as a target date given how things panned out last time — when Trump identified Easter as his target and then had to walk it back — but the president and vice president do think May is a realistic timeline for some parts of the country to begin reopening.

Anthony Fauci, director of the National Institute of Allergy and Infectious Diseases, has said he could see the country re-opening in phases, depending on the infection rates.

In an Associated Press interview, Fauci indicated the U.S. needed stronger and more efficient testing to be in place before parts of the country reopened. That was in sharp contrast to the president’s more upbeat, congratulatory messages about the administration’s coronavirus response.

Fauci did not speak at the briefing on Tuesday and no government officials spoke apart from the president.

One senior White House official described the IHME estimates as “promising” and a “positive sign.” This official also said there are “many plans in development” right now that are aimed at safely reopening the economy, including ways to boost surveillance testing across the country.

The administration conducted a stress test of the current surveillance testing system last week to see if it works and views that as one of the main areas that needs improvement before people return to work.

“The data is looking better and better each day, and ultimately we want the data to drive the decision-making in terms of reopening the economy,” the senior White House official said.

A second official said White House aides were aware of a widely circulated timeline put out by Morgan Stanley for restarting the economy and disagreed with it slightly. According to that timeline, the first wave of Americans returning to nonessential businesses would be in June, which is farther out than the current timeline being discussed by task force and other administration officials.

A number of conservatives outside of the administration, along with top officials like Kudlow, Marc Short, the vice president’s chief of staff, and Treasury Secretary Steven Mnuchin, have been pushing Trump to relax the administration’s guidelines on social distancing as soon as possible to urge businesses to reopen.

Health officials have been sifting through state-by-state data to determine when the economy could reopen, including diagnostic rates of new infections as well as the availability of hospital beds.

Even before the flurry of discussions about forming the new economic council, top economic and Treasury officials had been meeting to discuss ways to boost the economy once people return to work; that could include tax cuts, such as temporarily suspending the payroll tax cut for employers and employees for up to a year, or easing regulations even further.

In just three weeks of the crisis, 16.8 million Americans filed for unemployment benefits, according to the Labor Department, and millions more are expected to be added to that tally in the coming weeks.

Meanwhile, governors are making their own plans to reopen the economy without the president’s input. California Gov. Gavin Newsom said Tuesday that state officials would consider the state’s ability to track the virus; the protection of vulnerable people; and the capacity of hospitals as he weighed reopening schools and businesses throughout the state.