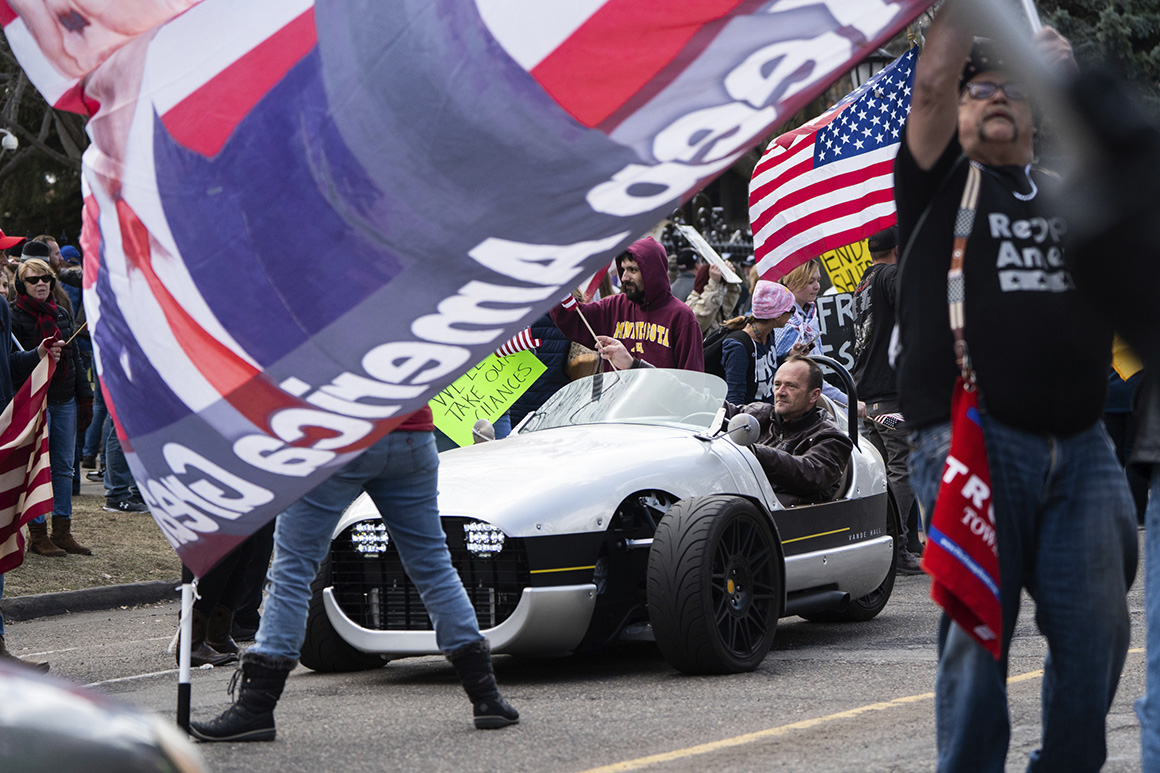 President Donald Trump is preparing for a long battle with America’s governors to save himself from the political fallout from coronavirus.

Over the next two weeks at the urging of the Trump administration, the map of the U.S. will start to resemble a patchwork quilt, with some states open for business while others remain locked down because of the spread of the virus.

Trump has said the onus for reopening states lies with their leaders, but he has simultaneously tried to pressure governors into restarting businesses and relaxing health guidelines as soon as possible.

Senior administration officials and Trump advisers say the level of hostility between the president and governors will probably only increase in the coming days, in part because Trump sees so much political opportunity in stoking those divisions during his reelection campaign. Governors have become his latest political foil, along with China and the World Health Organization, and he’s trying to bully and scapegoat them amid his administration’s response to the pandemic.

“People’s initial reaction is always to look to the president, but as time goes on and it becomes clear other states are doing other things, that blame and credit will shift to the governors, considering they are the ones making the calls,” one Trump political adviser said.

Small protests over the weekend in Texas, North Carolina, Michigan and New Hampshire only highlighted the frustration of some Americans about the shuttering of huge swaths of the economy. Trump aides and advisers are closely monitoring those protests because they think the demonstrations give momentum to the president’s argument to reopen the economy as soon as possible — not to mention a potential source of energy heading into the fall election.

The White House has been setting itself up for weeks now to blame governors for the response to the coronavirus, including any failure to procure medical equipment and resources, or problems that arise from restarting businesses and resuming public life.

The administration’s guidelines for reopening cities and towns, released on Thursday, urged states to have the ability to test any individuals who showed symptoms of Covid-19, the disease caused by the new coronavirus, before reopening — even as both Republican and Democratic governors said they needed help tracking down testing supplies.

“To try to push this off to say that the governors have plenty of testing, and they should just get to work on testing — somehow we aren’t doing our job — is just absolutely false,” Gov. Larry Hogan of Maryland, a Republican, said on CNN’s “State of the Union” on Sunday. “Every governor in America has been pushing and fighting and clawing to get more tests.”

“Look, we have increased our testing in Maryland by 5,000 percent over the past month, but it’s nowhere near where it needs to be,” Hogan added. “It’s not accurate to say there’s plenty of testing out there, and the governors should just get it done. That’s just not being straightforward.”

White House aides have argued that states need to do a better job of using hospital and private labs to ramp up testing, even as critics of the Trump administration say the president should deploy the Defense Protection Act to force manufacturers to produce the supplies needed for tests like swabs. The president said at a briefing Sunday night he would use the Defense Production Act to produce swabs for coronavirus tests, though he did not offer additional details.

Senior administration officials have instead argued that the governors are misjudging the level of supplies they will need, so much so that the federal government no longer takes their requests as seriously. Both publicly and privately, aides have used the example of New York state asking for tens of thousands of ventilators as an example of this pattern of governors asking for too much. The same dynamic, aides say, will play out with testing.

“I think the low point in the ventilator issue was when Andrew Cuomo was getting on his soapbox there and screaming, he needed 30,000 ventilators, which was twice the amount of stockpile that we had at FEMA,” White House trade adviser Peter Navarro said on Sunday on Fox News. “So, he basically wanted all the ventilators, and forget about the 49 other states.”

“And we’re sending him ventilators and ventilators,” Navarro added. “And it turns out that a lot of those wound up sitting in warehouses. And no American who needs a ventilator has not had one. And we’re going to see the same thing with other kinds of things, including the testing kits.”

Testing kits are not the only point of contention between the governors and the White House.

Several governors also disagree with the administration over the best way to procure medical supplies and equipment — as well as the guidelines to even restart the economy. Governors have formed three different consortiums — on the West Coast, the East Coast and in the Midwest — to work together to reopen their regions and develop guidelines to do so, effectively sidestepping the leadership of the president.

In the coming days, several states, including Texas, Florida, Minnesota and Vermont, will start to relax some health guidelines. Next week, Texas will reopen state parks, while retail stores and hospitals in the state will soon offer curbside pickup and resume nonessential surgeries.

Florida reopened some of its beaches over the weekend, while Gov. Phil Scott of Vermont, a Republican, will allow businesses such as law firms and realtors in his state to resume work with two employees per office. States like New York, Virginia and Maryland, meanwhile, remain virtually shut down for nonessential workers and stores.

This gradual reopening state by state is likely to create disarray as Americans begin to lead wildly different lives, depending on the state they live in, the rate of infections and hospitals’ ability to care for those sick with Covid-19.

One senior administration official said the White House was prepared for potential outbreaks that come from restarting the economy and would send resources, including health professionals and supplies, to places where new hot spots emerge — either in cities or in specific workplaces, like warehouses or plants that produce food.

While public-health officials applauded the guidelines the administration released for reopening the economy state by state, some fear that the president often does not deliver clear guidance from the briefing room podium or his Twitter feed.

“At each step, he does defer to the scientific experts, but his messages are often very mixed as everyone will agree,” said Howard Koh, a professor at the Harvard T. H. Chan School of Public Health who served as assistant secretary for health for the U.S. Department of Health and Human Services under President Barack Obama. “All that does is confuse the public.”

“Having trust in your government leaders to set the right policies can be fragile, and I think the best leaders are being extremely cautious and focusing on sound principles and looking at the data as a one-system approach,” Koh added.

To Trump observers, the president’s ongoing dance with the governors about who is ultimately responsible for restarting the economy is part of his playbook dating back to his days as a real estate developer.

“This idea that you grab credit for everything and push responsibility off on others is something long-standing with him,” said Michael D’Antonio, author of the biography “The Truth About Trump.” “When he went through his big bankruptcies in the early 1990s, he basically blamed his lenders and said they were responsible because they made the loans. He was not responsible because he failed to pay them back.”