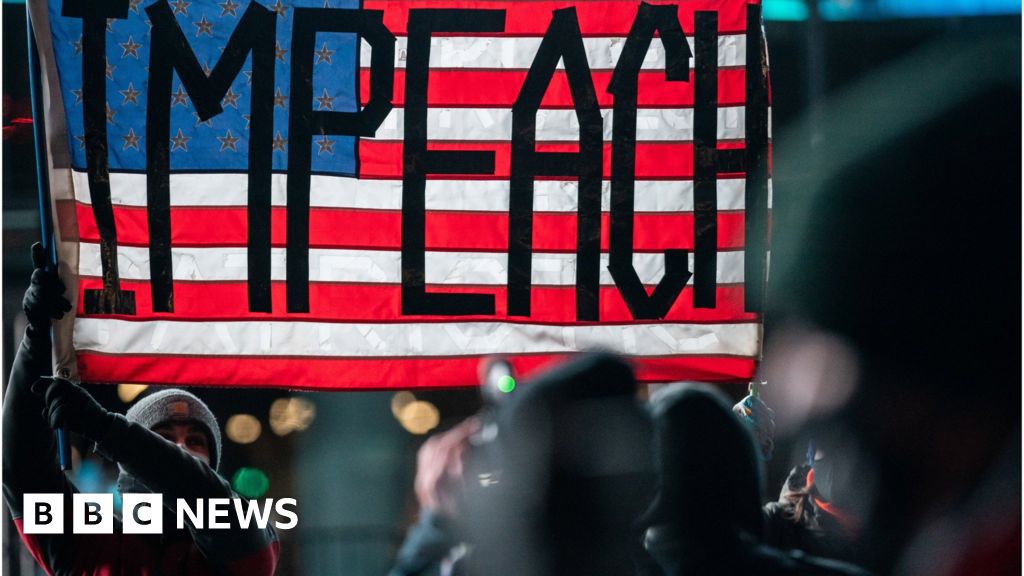 After the attack on Congress by a pro-Trump mob, there are growing calls for the president to be removed for “inciting” the riot.

Donald Trump is due to leave office on 20 January, when Democrat Joe Biden will be sworn in.

But many, including House Speaker Nancy Pelosi, want Mr Trump out of the White House before then.

There are ways that the president could get his marching orders, although they are unlikely.

Let’s have a look at them.

The top congressional Democrats – Speaker Pelosi and Senate Democratic leader Chuck Schumer – have urged Vice-President Mike Pence and Mr Trump’s cabinet to remove the president for “his incitement of insurrection”.

To do this, Mr Pence would need to invoke the 25th Amendment. But what is it?

The 25th Amendment allows the vice-president to become acting president when a president is unable to continue his duties, if for example, he or she becomes incapacitated due to a physical or mental illness.

The part of the amendment being discussed is section four, which allows the vice-president and a majority of the cabinet to declare President Trump unable to perform his duties.

They would need to sign a letter to the speakers of the Houses of Representatives and the Senate declaring the president unfit to govern, or incapable “of discharging the powers and duties of his office”. At this point, Mr Pence would automatically take over.

The president is given the chance to offer a written response, and if he contests the finding, then it falls on Congress to decide. Any vote in the Senate and House of Representatives ordering the president’s removal requires a two-thirds majority.

Until the issue is resolved, the vice-president would act as president.

But the chances of Mr Pence and at least eight cabinet members breaking with the president and invoking the amendment so far seem unlikely.

Read more: What is the 25th Amendment?

If the vice-president fails to act, Mrs Pelosi has indicated she would convene the House to launch their second impeachment proceedings against Mr Trump.

The president has already been impeached over allegations he sought help from Ukraine to boost his chances of re-election. The Senate acquitted him of these charges.

Mr Trump could become the first president in history to be impeached twice.

For that to happen, impeachment (charges) must be brought to the House and passed in a vote.

The case is then passed to the Senate, where a two-thirds vote is necessary for a president’s removal.

This milestone has never been reached in US history and there is no indication the Democrats would get those numbers in the Senate, where they only hold half of the seats.

It’s also not clear whether enough time remains to carry out the process.

Could Trump pardon himself?

Media reports, quoting unnamed sources, say Mr Trump has suggested to aides he is considering granting a pardon to himself in the final days of his presidency.

So could the president pardon himself?

The short answer is we do not know, given the short wording but broad application of the constitution, and the fact there is no precedent for a US leader issuing such a pardon.

Some legal experts have previously said no, citing an opinion issued by the Justice Department days before Richard Nixon’s resignation that he could not pardon himself “under the fundamental rule that no one may be a judge in his own case”.

Others though say the constitution does not preclude a self-pardon.

Read more: Could the US president pardon himself? (Written July 2017)

How likely is any of this?

Dozens of Democrats have voiced their support for impeachment, but at this stage it’s by no means a majority of the House of Representatives.

And although it’s possible that a slim majority would vote for impeachment in the House – as happened in December 2019 – it’s highly improbable that the required two thirds of the Senate would vote to remove the president.

Republican senators have expressed no desire to vote for removal.

As for invoking the 25th Amendment, this also seems increasingly unlikely.

Although there have been reports that it’s been discussed at a senior level, two cabinet members opposed to Mr Trump’s actions have now resigned, and those remaining are unlikely to coalesce behind a move to remove him.