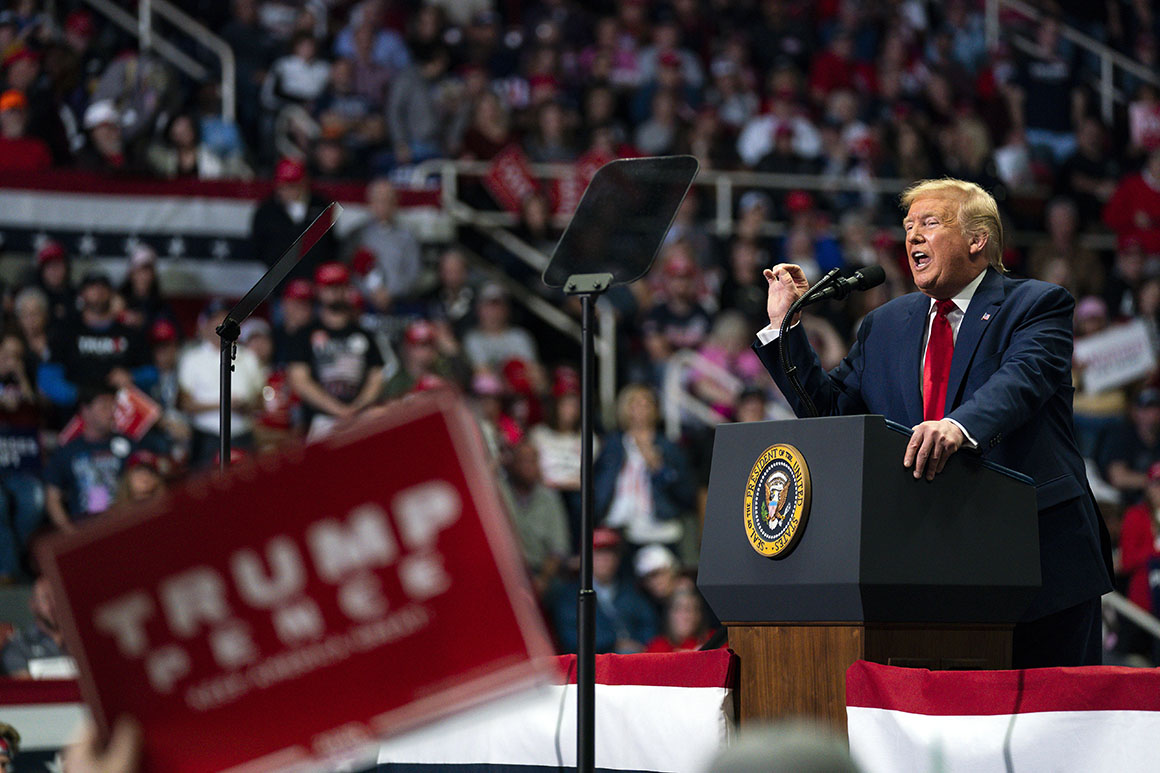 The strategy to blame China for the coronavirus outbreak began weeks ago in Washington, D.C. Now it’s spread to the rest of the country.

In Wisconsin, a state senator introduced a bill criticizing “the negligence and hostile actions” of the Chinese government. In Virginia, a conservative talk radio host debated ways the Trump administration could punish China for inflicting a pandemic on the world. And in Colorado, an activist protesting stay-at-home orders confronted a health care worker on a busy street. “Go to China if you want communism!" she yelled. "Go to China."

President Donald Trump’s decision to focus his coronavirus anger on China, America’s top economic rival, is part of a pivot for Trump’s reelection team as it scrambles to revise a campaign message that had been focused on financial prosperity. Now, with the economy in a coronavirus-induced coma, Trump’s team is working to instead make the 2020 race a referendum on who will be tougher on China — Trump or Joe Biden. In recent days, Trump’s campaign has even dubbed the president’s likely Democrat opponent “Beijing Biden."

The message appears to be resonating. John Fredericks, the Virginia talk radio host and Trump supporter, said his callers, many out of work in rural areas, trust Trump to retaliate against China.

“My callers know what China has done,” he said. “There’s blood on their hands.”

But while Republican pollster Frank Luntz predicted China will be the biggest issue in the presidential campaign, second only to the coronavirus itself, he said it’s not clear the issue will benefit Trump.

“The question pollsters can’t answer right now is whether this helps Trump or Biden,” Luntz said “More precisely, both candidates will be criticized for past and current comments they’ve made. It’s not clear which candidate will be hurt more by China.”

Indeed, both the Trump and Biden camps seem to think they have a winning hand on China.

Polls conducted for the Trump campaign and Republican senators show China will be an effective issue for Republicans in November, according to three people who have seen the numbers, leading the GOP to buy a flurry of TV and Facebook ads, dash off emails to supporters and increase their tough rhetoric.

“Unlike Sleepy Joe Biden and the rest of the Crooked Democrats, President Trump keeps his promises, which is why we’re not letting China get away with using America as a scapegoat,” one Trump campaign Facebook ad read.

But Biden and the Democrats, too, think focusing on China will lift their chances in November. They’re criticizing Trump for initially praising the country’s response to the pandemic and accusing him of caring more about his trade deal with China than American lives. The Democratic group American Bridge just launched an ad accusing Trump of trusting China.

Both candidates also have perceived weaknesses on the issue.

Biden last year appeared to downplay China as a geopolitical competitor and is fighting claims that the business partners of his son, Hunter, landed a $ 1.5 billion deal days after they traveled to China on official business when he was vice president, even though there’s no direct evidence of impropriety.

For his part, Trump has wavered repeatedly on China’s culpability for the pandemic. He initially praised the country and its leader, President Xi Jinping, more than a dozen times in the early days of the outbreak, often stressing the recent trade deal the two countries had signed.

Trump later reversed course, though, and started excoriating the country for its handling of the virus. The pivot came as Trump faced criticism that he initially downplayed the outbreak and failed to quickly produce and ship tests and medical supplies to states. America has now passed 1 million coronavirus cases, with more than 60,000 people dying from the disease.

“He understands his presidency rises and falls on the very pandemic he denied was a pandemic and he is desperate to try to counteract the narrative that has set in that he wasn’t up to the job,” said Rep. Gerry Connolly (D-Va.), who cited coronavirus when he endorsed Biden last month. “That’s a devastating critique. You don’t get re-elected with that narrative.”

In response, Trump has touted the narrative that China, not him, is at fault. It’s a message that plays into American’s current feelings about China. About two-thirds of the country has an unfavorable view of China, the highest number in 15 years, according to a poll by Pew Research Center. That figure is also up nearly 20 percentage points since Trump was inaugurated in 2017.

“The desire for China to be held accountable for the spread of Covid-19 is no longer limited to Trump supporters,” said Brian Swenson, a Republican strategist in Florida who worked for Sen. Marco Rubio (R-Fla.), referencing the disease that results from the coronavirus. “There is a growing bipartisan call at the local level for China to be held accountable for their lack of transparency with the world community, their spreading of propaganda and misinformation and for failing to diminish the spread of Covid-19.”

Kyle Hupfer, chairman of the Republican party in the red state of Indiana, said residents expect Trump to get to the bottom of the pandemic. “There’s certainly a level of distrust related to what China has done and how they’re approached this,” he said.

In recent weeks, Trump has tried to take advantage of those growing feelings of animosity — nicknaming the virus the “Chinese virus,” accusing China of lying about its number of cases and boasting he contained the outbreak by restricting travel from China in January, even though many public health experts say the ban merely bought the U.S. time that Trump did not use to prepare adequately.

This week, Trump said his administration was investigating whether China covered up what it knew about the early spread of coronavirus. His aides are discussing ways to penalize the country.

Peter Navarro, Trump’s economic adviser, has pushed the president to reduce the government’s dependency on imports from China when it comes to medical supplies and drugs. Trump supporters around the country have latched onto Navarro’s efforts.

“To make America great again, we need to be dependent on ourselves,” said Ralph King, a Trump supporter in Bedford, Ohio, who co-founded the conservative group Main Street Patriots. “We should not be dependent on other countries.”

Trump’s allies say going after China is a particularly compelling issue for the president because he constantly criticized Beijing while on the campaign trail in 2016, accusing the country of taking U.S. jobs, spying on U.S. businesses and stealing U.S. technology.

“He should stay on the message he has had for many years,” said a Republican who speaks to Trump.

In the coming weeks, Trump’s campaign is expected to launch a similar ad blitz.

“Our internal data shows that Joe Biden’s softness on China is a major vulnerability, among many,” said Trump campaign spokesman Tim Murtaugh, though he declined to release the polling numbers.

There are growing signs Trump’s strategy is working.

Last week, Missouri became the first state to sue the Chinese government for its role in the pandemic, accusing it of failing to warn other nations of the virus and allowing people to travel outside the country, among other things. Mississippi followed with its own suit.

Legislators in other states are considering their own actions while some conservative activists protesting stay-at-home orders are mentioning China.

Some Republican senators, including Rubio, Josh Hawley of Missouri and Tom Cotton of Arkansas, have pushed for additional actions to hit China. Rubio wants to halt China’s hold on the pharmaceutical supply chain. Hawley wants to prove the virus started in Wuhan, China. And Cotton wants to ensure Americans can sue Chinese officials for the pandemic.

Senate Republican strategists also recently distributed a memo advising GOP candidates to focus on China and blame the country for covering up the virus, accuse Democrats of being “soft on China” and stress that Republicans will push to sanction Beijing.

In Florida, Gov. Ron DeSantis is encouraging medical companies to stop doing business with China and has explored divesting the state’s interests out of China. He wants everyone to know he’s tough on China — just like Trump.

“I have not forgotten about China,” DeSantis told reporters recently. “In fact, some of you guys may want to look this up, but there was a Chinese Communist Party think tank that did a report in February, and they analyzed the governors in the United States — who was hardline, who was friendly and who was unknown. There were five governors that were hardline against China. Where do you think I was?”

Arek Sarkissian contributed to this report.