Trump says he can heal national divide with 'law and order' 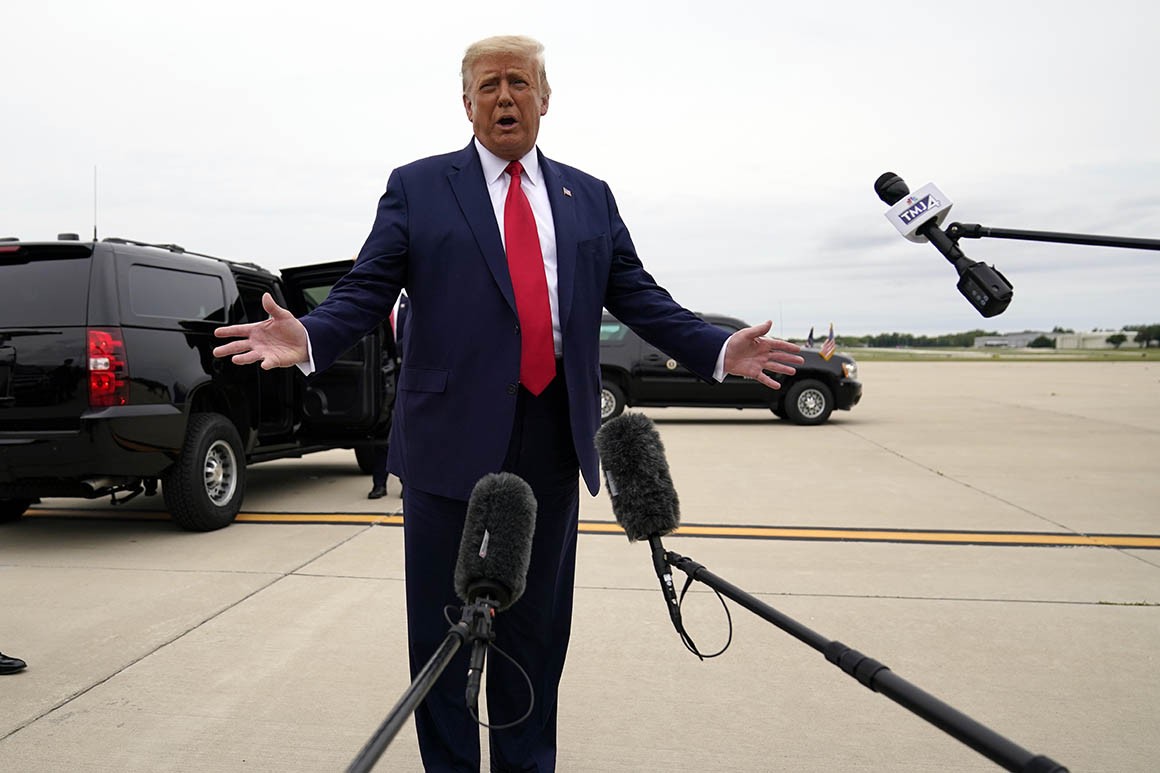 His comments came shortly before the he boarded Air Force One en route to Kenosha, Wis., a trip the city’s mayor and Wisconsin’s governor objected to. The visit comes more than a week after a white police officer shot 29-year-old Jacob Blake, a Black man, in the back seven times, sparking another wave of protests in a country that has seen several high-profile instances of racial violence against Black Americans by white police officers and vigilantes.

Two days after Blake was shot, a white Illinois teenager allegedly shot three people during protests in Kenosha, killing two, and a white man was killed in Portland, Ore., over the weekend after a clash between protesters and Trump supporters.

The president will not meet with Blake’s family or engage with protesters, according to White House guidance on the president’s daily activity, but he will survey “property affected by recent riots,” tour an emergency operations center and participate in a roundtable with local enforcement.

Trump was joined on Air Force One by Attorney General Bill Barr, acting Homeland Security Secretary Chad Wolf and former White House chief of staff Reince Priebus, who chaired the Republican National Committee in 2016. And he was greeted on the ground by Republican Sen. Ron Johnson, who chairs the Homeland Security and Governmental Affairs Committee.

The president’s entourage and schedule are indicative of the pivot Republicans are trying to make, turning the conversation away from an economy battered by the coronavirus pandemic, which has killed upwards of 183,000 Americans, to the issue of public safety as the presidential race enters its final stretch.

Wisconsin is a battleground state that Trump won in 2016 by less than a percentage point. Democrats were set to hold their nominating convention in Milwaukee earlier this summer before the event went virtual.

Republicans are seeking to capitalize on violence erupting in cities across the countries this summer, an offshoot of the massive protests that have taken over the streets of towns and cities across the country. Trump has targeted white suburban voters, warning them that their “suburban lifestyle dream” is in jeopardy, and casting Democrats as weak on crime and anti-law enforcement.

In the hours before Trump arrived, about 200 Trump supporters gathered along Sheridan Road through downtown. A couple dozen Black Lives Matter protesters walked through the group, fists raised, calling out “Black lives matter.”

The exchanges between both sides quickly grew fiery, as Trump supporters shouted back “All lives matter!” One Trump supporter yelled that the president had saved the city from burning down as BLM protesters called him a racist and fascist.

The opposing sides got into each other’s faces, adjudicating the violent events that recently swept through the country — from Breonna Taylor in Louisville to George Floyd in Minneapolis.

Even before landing in Kenosha, the president was widening divides. He cited an anonymous person who, he said, claimed to have flown on a plane “filled” with looters, anarchists and rioters “obviously looking for trouble,” doubling down on something even Trump-friendly Fox News host Laura Ingraham said sounded like a conspiracy theory.

And Trump said he was traveling to Kenosha to thank law enforcement officers there, because they “had such a big success in shutting down … a city that would’ve been burnt to the ground by now.”

“I think a lot of people are looking at what’s happening to these Democrat-run cities, and they’re disgusted,” Trump said. “They see what’s going on, and they can’t believe this is taking place in our country. I can’t believe it, either.”

The president also said he saw “radical anarchists” trying to get into Portland Mayor Ted Wheeler’s house Monday night. Hundreds of demonstrators protested outside Wheeler’s home Monday to call for his resignation. Police declared the gathering an unlawful assembly and later a riot.

“Lots of bad things were happening to this poor, foolish, very stupid mayor,” Trump said. “I mean, how he could be mayor, I have no idea, but all he has to do is call, and within 10 minutes, their problem will be over. As you know, they have to call us. They have to call and request help.”

Trump claimed a “tremendous” number of people were “harassing” Wheeler “horribly” and trying to break into his home. Nineteen people were arrested at the protest. Some people were charged with rioting, carrying concealed weapons and committing criminal mischief, and one person is accused of trying to assault an officer.

Trump said the man who was killed Saturday in Portland was “targeted” and that protesters “were so happy” about the killing. And he lamented the media’s focus on his supporters shooting paintball guns at protesters instead of highlighting what he called an execution in the street. The shooting was widely covered.

“The press should be ashamed of themselves. I think the press is actually — the media is what’s fueling this, more so than even [Democratic presidential nominee Joe] Biden,” Trump said. “Because Biden doesn’t know he’s alive. The press is really fueling this, and they’re fueling it horribly. And you’re doing a great disservice to your country.”