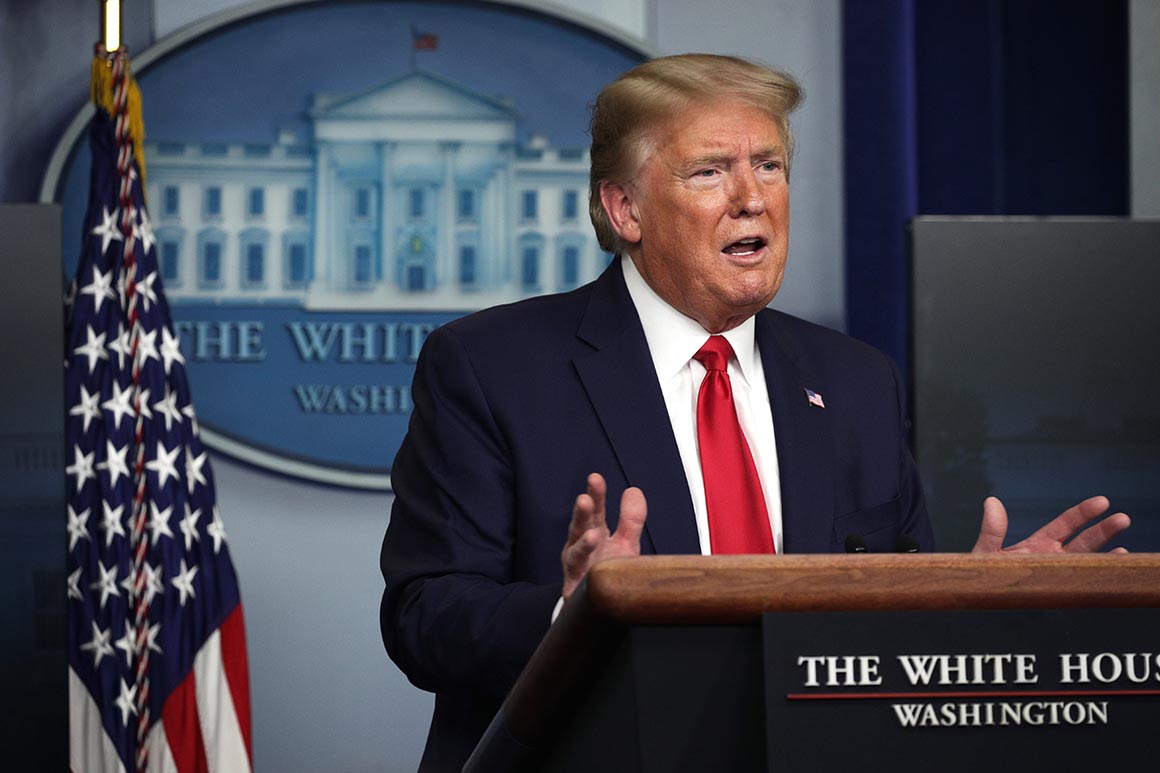 President Donald Trump on Monday night said that he was suspending immigration into the U.S. because of the coronavirus pandemic.

“In light of the attack from the Invisible Enemy, as well as the need to protect the jobs of our GREAT American Citizens, I will be signing an Executive Order to temporarily suspend immigration into the United States!“ Trump posted on Twitter.

The announcement stood in contrast to Trump’s recent messages of cautious optimism about the country soon reemerging from weeks of lockdowns designed to contain the virus. The president has repeatedly tried to downplay the severity of the outbreak since its arrival in the country, and his push to reopen the economy has put him at odds with some of the nation‘s governors and, at times, his top health experts.

Trump did not hint at making any drastic immigration moves during his lengthy daily coronavirus news briefing earlier Monday evening. Immigration has largely taken a back seat during the pandemic as the president hopes to salvage a strong economy that had become one of his major campaign points in the lead-up to the November election.

Trump has previously boasted that closing the borders to foreigners traveling from China demonstrated his administration‘s serious and early response to the threat from the coronavirus. International travel has come to a virtual standstill as countries across the globe have imposed travel restrictions to prevent the spread of the disease.

Trump’s tweet did not make clear what specific action he would take: He could simply suspend entries for a period of time, or cancel a specific program altogether for the year.

The Department of Homeland Security is still drafting the executive order, according to three people familiar with the situation. One possibility that has been discussed is an exemption for temporary guest workers, including those who work on farms.

When asked what promoted the decision, a top DHS official responded: “22 million unemployed Americans and counting due to Covid-19.”

Since the pandemic began, the administration had already restricted foreign visitors from China, Europe, Canada and Mexico, and had paused processing for immigrants trying to come into the U.S. on non-worker visas because of office closures. That means the impact would probably address only immigrants coming here to work.

Trump has faced calls from conservatives to stop allowing foreign workers to enter the U.S. because millions of Americans are out of work after shutdowns to stop the spread of the virus. But for weeks, his administration allowed them to enter.

Specifically, the U.S. eased requirements for immigrants to get certain jobs, such as farmworkers, landscapers and crab pickers, aware that certain industries, including those that fill grocery store shelves, could be hurt if they couldn’t hire foreign employees. It has also begun easing the process for companies looking to hire foreign workers, altering some paperwork requirements, including allowing electronic signatures and waiving the physical inspection of documents.

In early April, the administration backtracked on a plan to pause the approval of 35,000 more seasonal worker visas, pending further review.

Former Attorney General Jeff Sessions, who is running for a Senate seat in Alabama, pushed for a complete moratorium on immigration to the U.S. on Tucker Carlson’s show on Fox News last week.

Carlson has been in close contact with Trump during the course of this virus and was one of the primary outside allies pushing him to do the China travel ban back in early January.

“The president’s comments reflect a sensitivity to a primary purpose of all immigration laws of every country, and that is to protect a nation’s vulnerable workers,” said Roy Beck, president of NumbersUSA, which supports restrictions. “With tens of millions of Americans who want to work full time not able to, most immigration makes no sense today, and to allow it to continue at its current level at this time would show a callous disregard for those enduring deep economic suffering."

Trump’s decision will anger the business community, including the U.S. Chamber of Commerce, which has argued that foreign workers are critical to companies that might be unable to find enough unemployed Americans willing to take certain jobs.

The move could contradict Trump’s previous statements. He has repeatedly touted the importance of agricultural visas in recent weeks.

“We want them to come in,” he said in early April. “We’re not closing the border so that we can’t get any of those people to come in. They’ve been there for years and years, and I’ve given the commitment to the farmers: They’re going to continue to come. Or we‘re not going to have any farmers.”

Despite Trump’s campaign vow to reduce immigration, the number of immigrants with temporary visas has steadily increased during his presidency, reaching 925,000 in 2018, according to the Migration Policy Institute.

While there is no cap for the total number of temporary workers, there are annual limits on several of the dozen-plus visa categories. More than 1 million immigrants are allowed into the United States each year on a permanent basis, but only a fraction — 140,000 — come through employment categories.

“This action is not only an attempt to divert attention away from Trump’s failure to stop the spread of the coronavirus and save lives, but an authoritarian-like move to take advantage of a crisis and advance his anti-immigrant agenda,“ Castro tweeted Monday night. “We must come together to reject his division.“

Rep. Jerry Nadler (D-N.Y.), chairman of the House Judiciary Committee, echoed Castro’s thoughts, tweeting: “President Trump now seeks to distract us from his fumbled COVID-19 response by trying to put the blame on immigrants. The truth is many immigrants are on our front lines, protecting us as doctors, nurses, health aids, farmworkers, and restaurant workers.“

But RJ Hauman, government relations director at the Federation for American Immigration Reform, which favors immigration restrictions, said: “Putting the brakes on immigrant admissions at the height of a health crisis and mass unemployment is the right call and shouldn’t be controversial. However, one question remains — are there any caveats like guest workers being excluded from the order? We’ll see.”