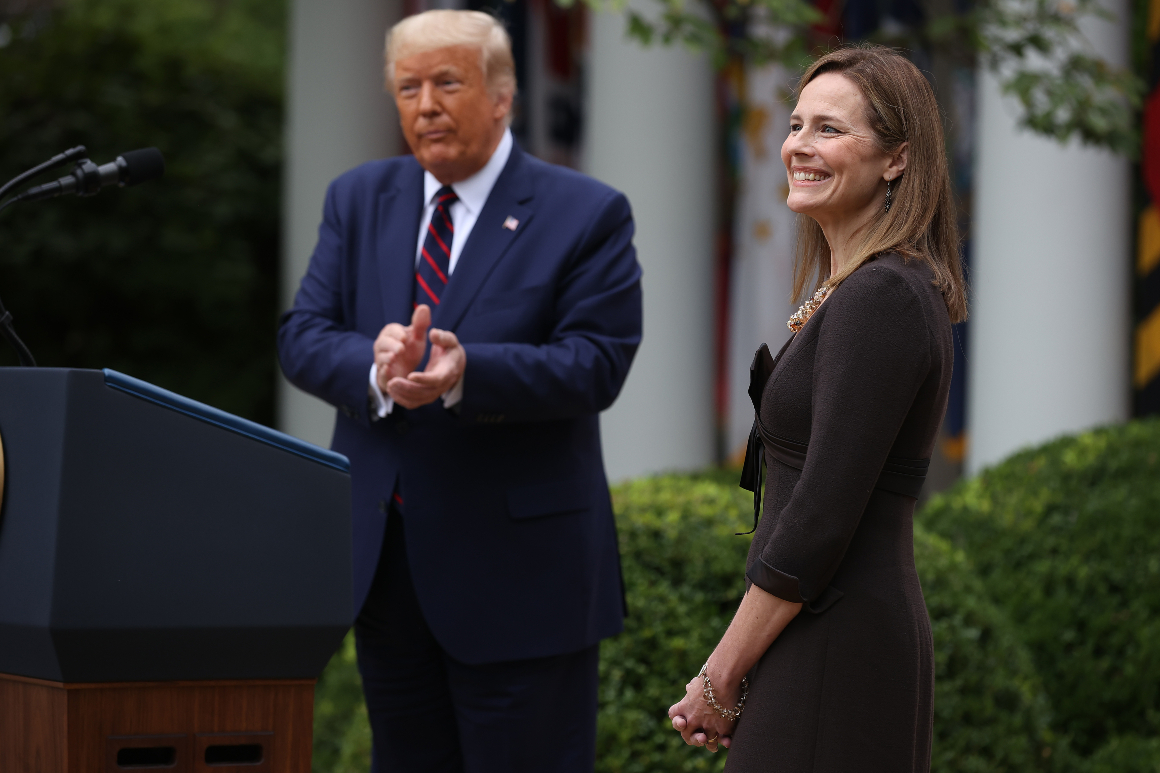 Her nomination has been bookended by coronavirus outbreaks within the Trump administration. At the first, which many have linked to Trump’s Sept. 26 announcement, officials mingled in the Rose Garden with few masks and no social distancing.

Around a dozen people who attended the event later tested positive for the virus, including the president and first lady and three senators. Critics widely panned the Rose Garden announcement, and even Trump’s top infectious-diseases expert referred to it as a “super spreader event.”

Over the weekend, Vice President Mike Pence’s office reported its own spate of infections, including Pence’s chief of staff, though Pence has tested negative and is not pausing his campaign schedule.

Coronavirus cases are also surging around the globe, including within the U.S., which recorded a new record number of daily infections over the weekend.

“We’re doing tonight the best we can to encourage as much social distancing as possible,” he said, though he did not make any mention of attendees being required to wear face masks.

Speaking to reporters later in the day, Democratic presidential nominee Joe Biden said he didn’t blame the president for wanting to celebrate but hoped Trump had learned a lesson from the first time around and would be testing attendees and requiring masks.

“When you’re a boss of an operation, the example you set, what you do matters to the rest of the company. Well, the words of a president and the actions of the president, they matter. They matter a great deal,” Biden said.

“And when the president of the United States puts on these super-spreader events — you saw what happened when she was announced, all of the people, including his family, thank God they seem to be OK, all the people came down with Covid,” he added. “The fact is that it’s just not appropriate now. And so I just hope he and the vice president and others act with some dispatch and do it so everybody knows.”

ByMegan Cassella Goff has worked for House Majority Leader Steny Hoyer in a number of positions, most recently as floor director for the House of...
Read more