Trump shifts messaging: Coronavirus ‘will get worse before it gets better’ 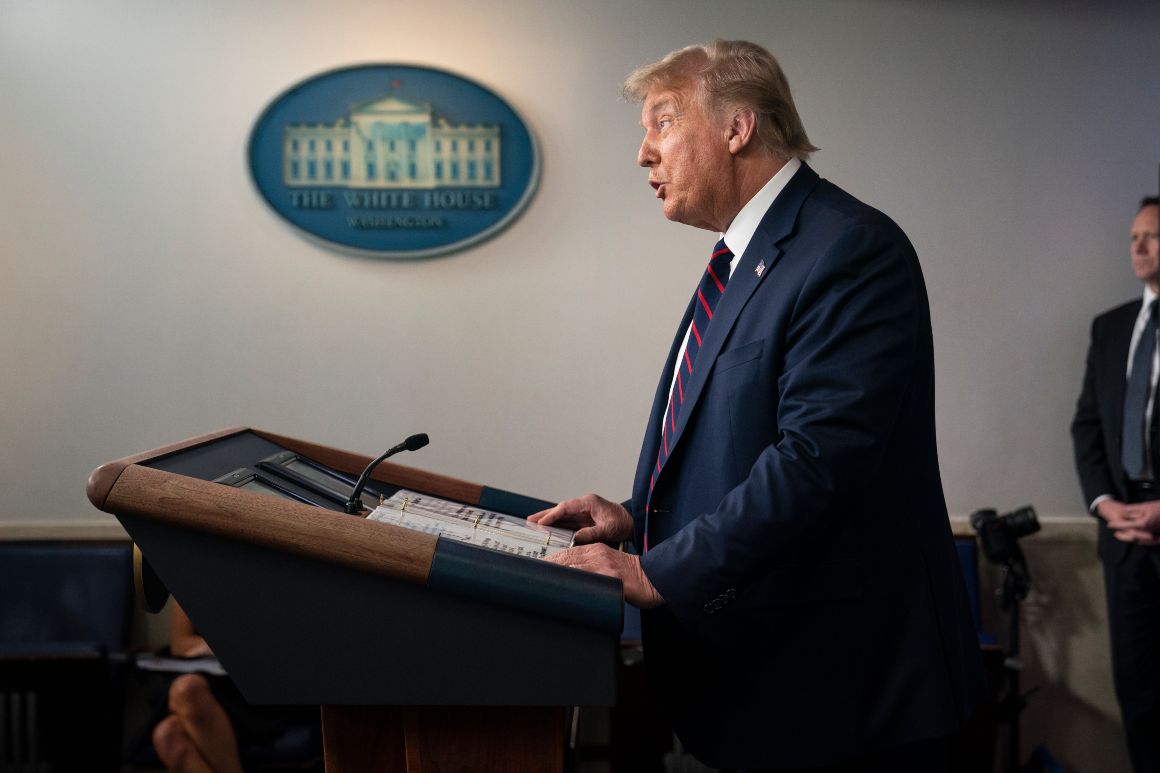 Trump’s shift in tone, along with the return of the coronavirus briefing, comes as the latest surge in cases has become impossible to ignore. Close to 4 million Americans have contracted the virus, though data from the CDC indicates the true number of infections could be 10 times greater.

His comments also come as the country returned to another grim milestone, recording more than 1,000 daily deaths from the coronavirus for the first time since May.

In the first coronavirus briefing in three months, President Donald Trump acknowledged the real scope of the pandemic’s impact in the U.S.

“As one family, we mourn every precious life that’s been lost,” Trump said at the beginning of prepared remarks, one of the most specific acknowledgments in some time of the more than 140,000 Americans killed by the virus. The president pledged to develop a vaccine for the virus “in their honor,” though he later reverted to his insistence that the pathogen would one day just disappear.

The president touted progress on the developments of coronavirus therapies, including the antiviral medication remdesivir, which he said had “significantly reduced the severity and duration of the disease.” The government is rationing its limited supplies of the drug, however.

Notably absent from Trump’s speech was any mention of the malaria drug hydroxychloroquine, which he has repeatedly touted as a treatment for Covid-19the disease caused by the coronavirus. It has been proven ineffective against the virus in multiple clinical trials, and can cause heart problems.

Trump also repeated promises that a coronavirus vaccine is on the way, but his own health officials have been cautious not to make promises about a specific timeline for an effective vaccine.

There are a number of potential vaccine candidates currently in trials. One candidate developed by Moderna in partnership with the National Institutes of Health is expected to enter the final stage of human trials at the end of the month.

Still, the president’s briefing was a dramatic departure from just weeks ago when he sought to claim that 99 percent of coronavirus cases were “totally harmless” (on Tuesday, he described the virus as “vicious and dangerous”), equivocated on the issue of wearing masks in public to cut down transmission (Trump said at the White House that “whether you like the mask or not, they have an impact”) and played down soaring case numbers as small “embers” of outbreaks resulting from more testing and as a byproduct of reopening the economy.

As Trump stuck largely to his script, he spoke Tuesday of a “concerning rise” in cases and for the most part steered clear of some of the more striking proclamations that led the once-daily briefings to be canceled in the first place — including his suggestion that experts look into injecting disinfectants as a potential treatment.

For the most part, Trump ditched the hyperbole that would often need to be cleaned up moments later by Dr. Deborah Birx, the White House coronavirus response coordinator; Dr. Anthony Fauci, the head of National Institute of Allergy and Infectious Diseases; or Vice President Mike Pence.

He even appeared to acknowledge shortcomings in U.S. testing capabilities, promising that his administration was “working to reduce turnaround time” as governors across the nation complain about a lack of testing supplies and delayed results of sometimes a week or more that undermine the notion of contact tracing.

At the same time, he claimed that the White House “currently has zero … unfulfilled requests for equipment or anything else that they need from the governors.”

It’s unclear whether Trump, who has long struggled with consistency and message discipline, will be able to maintain even the small shift he demonstrated on Tuesday. But the return of the briefing and the uncharacteristic discipline come amid numerous warning signs that his reelection campaign is in trouble.

All the while, Trump’s approval rating has tanked, as the president has been kept off the campaign trail by the virus. When he held his first rally in months last month in Tulsa, Okla., less than half the stadium was full. The campaign canceled what would have been Trump’s second rally several weeks ago, citing a nearby tropical storm. And Trump last week set in motion a major campaign shake-up, demoting his campaign manager and naming a new one heading into the final months of the campaign.

Trump’s poll numbers and the spike in cases also coincided with a greater willingness from close allies to buck his rosy pronouncements about the virus as the situation on the ground back home grew more dire — some criticized testing, others bristled at threats to cut off federal funding to schools that don’t reopen for in-person instruction, and still others pleaded with the president to take a stronger position in favor of wearing face coverings.

The new tone appeared to also extend to reporters, with whom the president was less combative than usual on Tuesday, even as he deflected on a question about whether voters should make November’s election a referendum on his handling of the outbreak.

And Trump didn’t mention Joe Biden, whose name gets worked into nearly every public address the president makes.

Still, when asked about his change in tone, Trump again insisted that coronavirus “will disappear,” and that he had never disagreed with scientists’ recommendations on social distancing, despite an aggressive push for the country to reopen, including, in the coming weeks, schools.

And he continued to hold up U.S. testing as unrivaled when pressed by reporters about his administration’s attempt to block Congress from providing more money for coronavirus testing and tracing in its next relief package.

The president said he would be briefed on the issue at some point, while maintaining that the country was processing “massive” numbers of tests.

“I think we are doing tremendous amounts of testing, but if the doctors and the professionals feel that even though we are at a level that nobody ever dreamt possible that they would like to do more, I’m OK with it,” he said.

Trump ended the briefing by teasing more of them, but he indicated that they could, as past briefings had, veer away from the subject of coronavirus and touch on topics perceived to be more helpful to his reelection prospects.

“We will keep you abreast of this and talk about other topics like the economy, which is doing well,” he said, noting that “the stock market had another good day” and attributing that to the “positive things happening on this front.”