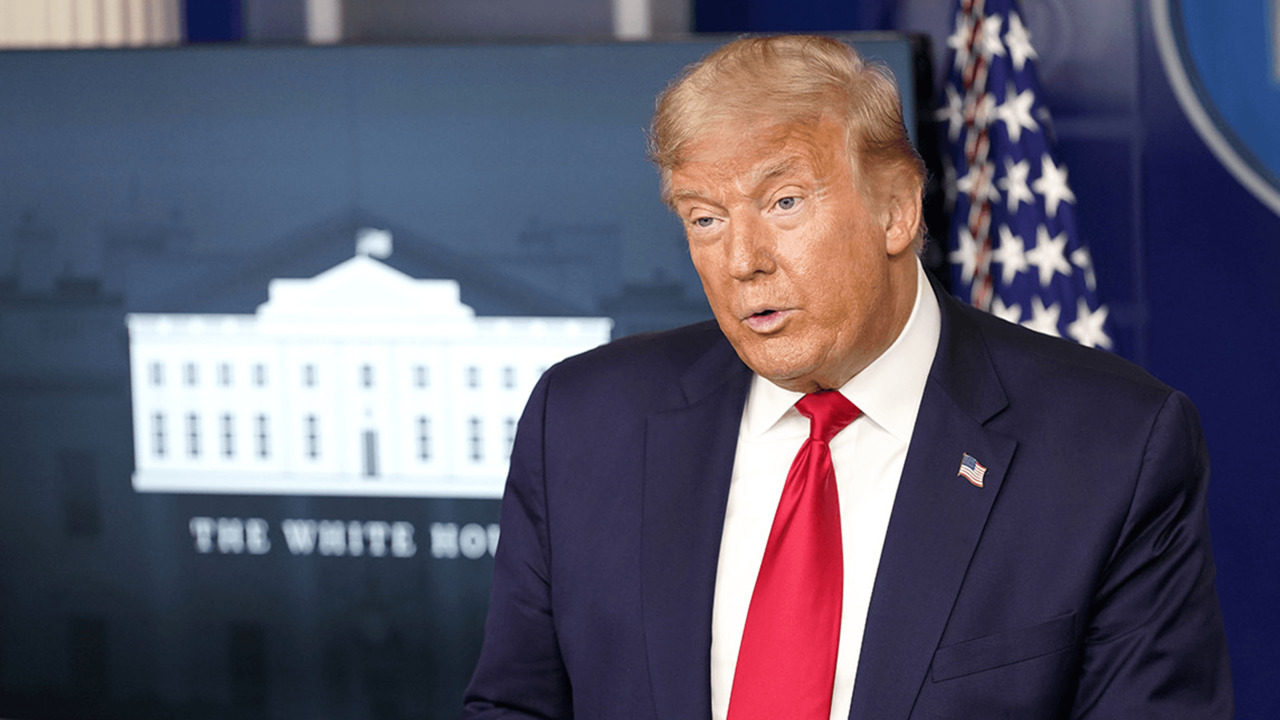 The figures Roberts cited came from House Democrats’ opening offer for coronavirus relief, legislation passed in May which stalled in the Republican-held Senate. The bill — dubbed the HEROES Act — included $ 3.6 billion for “election resilience grants,” which could be used for mailing ballots and registration forms to voters.

Trump had resoundingly rejected those proposals as part of his ongoing attack on mail-based voting. The president conceded in an interview with Fox Business Network’s Maria Bartiromo on Thursday that blocking supplemental funding would leave the Postal Service unable to handle the expected volume of mail-in ballots, a maneuver Trump’s opponents quickly characterized as an attempt at voter suppression.

But the president’s remark Friday hinted at a change in posture, hinging on approval of his administration’s relief proposals. Shortly before the Friday briefing, Trump had tweeted that he was pushing Treasury Secretary Steven Mnuchin to advance direct payments to cushion the financial blow of the coronavirus pandemic.

Trump tweeted: “DEMOCRATS ARE HOLDING THIS UP!”

The president has repeatedly characterized mail-in balloting as a gateway to voter fraud, even as Americans fear the risk of contracting coronavirus at in-person polling stations.

Despite his claims, there is no evidence of the type of widespread voter fraud that Trump has alleged. There is some additional risk of voter fraud with mail-in voting, experts have suggested, but that risk can be mitigated by election security measures.

Trump’s appointed postmaster general, Louis DeJoy, has also faced criticism this month for substantially adjusting postal services in what he has characterized as cost reduction efforts. Postal workers have complained that the measures severely hamper their ability to deliver the mail on time, potentially hamstringing the service just as an unprecedented number of voters are expected to request and submit mail-in ballots.

The Postal Service’s inspector general is examining DeJoy’s changes to mail service that have caused an uproar on Capitol Hill a couple months before the election and also whether he’s complying with government ethics rules, according to a spokesperson for the IG and a spokesperson for Sen. Elizabeth Warren (D-Mass.).

Warren and eight other Democratic lawmakers sent a letter to the IG last week requesting the review and said that DeJoy’s changes could threaten the ability of Americans to properly vote by mail in November.

“We are in receipt of the congressional request and are conducting a body of work to address concerns raised,” said Agapi Doulaveris, a spokesperson for the IG. “We cannot comment on details of ongoing work.”

Saloni Sharma, a Warren spokesperson, said: “We have learned that the United States Postal Service Office of the Inspector General is investigating all aspects of our request from August 7th and that they’ve already requested documents as part of the review.”

CNN first reported the IG’s investigation and also reported earlier this week that DeJoy has a major equity stake worth between $ 30 million and $ 75 million in his old company XPO Logistics, a contractor that does work for USPS and other parts of the government.

Warren’s letter said that DeJoy’s changes have made mail service “slower and less reliable” and also threaten “the well-being of millions of Americans that rely on the Postal Service for delivery of Social Security checks, prescriptions, and everyday mail of all kinds.”

House Speaker Nancy Pelosi and a number of House committee chairs also sent a letter to DeJoy on Friday pressing for details behind DeJoy’s policies. The letter also specified that the Postal Service requested the $ 25 billion of additional funding in the HEROES Act to meet normal operating standards amid the pandemic — a request approved by the service’s bipartisan, Trump-appointed board of governors.

The request came as the Postal Service claimed it would not be able to “fulfill its core mission,” let alone accommodate an unprecedented surge in election materials.

The Postal Service sent letters to several states and Washington, D.C., warning them that ballots may not arrive in time to be counted based on current state election policies, The Washington Post reported Friday. Several states’ voting regulations operate on timelines that are far too tight for the Postal Service to mail and return ballots to meet election deadlines, the letters warn.

Florida’s Republican secretary of state, Laurel Lee, responded to the Postal Service, saying election officials were monitoring the situation, but that voters were ultimately responsible to have their ballots in by 7 p.m. on Election Day. Lee said voters could leave their ballots at secure drop boxes run by election officials if they are concerned about extended mailing times.

Postal Service spokesman David Partenheimer said in a statement to POLITICO that the service had been contacting state officials for months to ensure mail-in voting ran smoothly. Some states have reported mailing volume 10 times higher than normal.

“The Postal Service is well prepared and has ample capacity to deliver America’s election mail,” the statement said. “However, the increases in volume and the effect of when volumes were mailed in the primary elections presented a need to ensure the Postal Service’s recommendations were reemphasized to elections officials.”

California’s Democratic Gov. Gavin Newsom also called out Trump, saying Friday the president was responsible for the “vandalism of our Postal System.” California will count ballots that arrive up to 17 days late so long as they are postmarked by Election Day.

“We thought that was important with all the uncertainty of Covid,” Newsom said. “We didn’t realize how prescient, not just important, that appears to have been.”

Pelosi and Senate Minority Leader Chuck Schumer both said in a statement Friday that “The President, his cronies and Republicans in Congress continue to wage their all-out assault on the Postal Service and its role in ensuring the integrity of the 2020 election.”

“Yesterday, the President threatened to further starve the Postal Service of the funds that it needs to deliver the absentee ballots necessary to ensure that people do not have to choose between their health and their vote this fall — threats that he doubled down on last night,” they wrote.

Pelosi and Schumer noted in their statement that the president and first lady themselves had requested to vote absentee this week.

“Democrats call on the President to immediately cease his assault on the Postal Service, make clear that he will allow the 2020 election to proceed without his sabotage tactics and enable the American people the same opportunity he and the First Lady requested this week to vote by absentee ballot,” Pelosi and Schumer said.

The union endorsed Democratic candidates Joe Biden and Kamala Harris for the November election in its Friday statement.

“This pandemic threatens the very survival of USPS,” the union wrote. “Yet, while postal employees are on the front lines providing essential services to the public every day, the current administration refuses to provide the necessary financial relief that would strengthen the agency during this pandemic.”

Gary Fineout and Jeremy White contributed to this report.