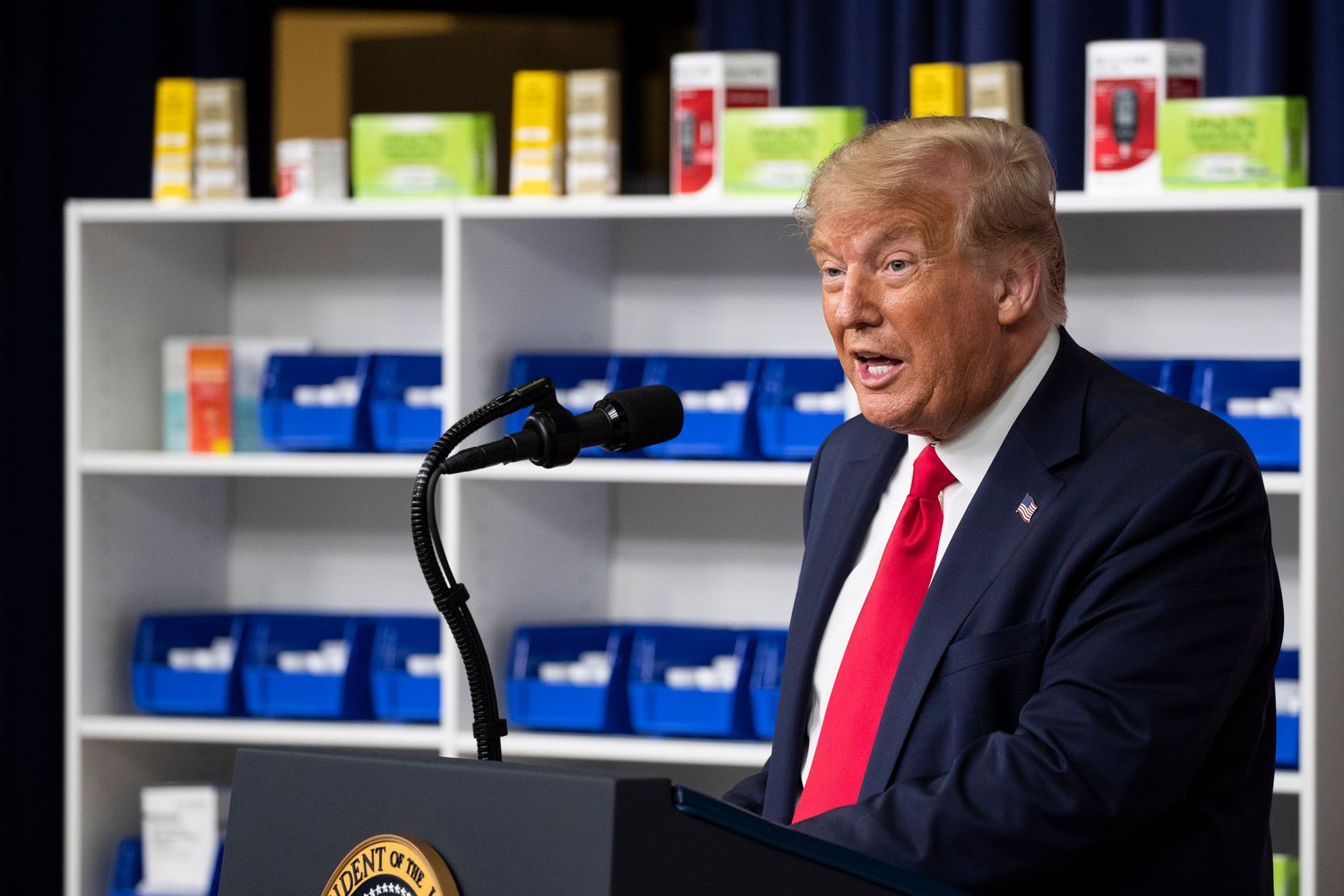 But the ambitious plans are rife with limitations. The rebate order comes with a caveat that any plan cannot increase seniors’ premiums, the unworkable problem that led the adminstration to kill its original rebate rule last year.

And while Trump called the so-called favored nations rule — linking seniors’ costs for certain physician-administered medicines to lower prices paid abroad — the “granddaddy” of the policies announced today, he also promised to drop the plan if pharmaceutical companies could present a better option within the next month.

Pharmaceutical executives are meeting at the White House on Tuesday.

The orders are not immediately enforceable. Health officials have been working on ways to implement some of the proposals — namely guidelines for states to implement importation plans. But it’s is unlikely that any could be finalized before the November presidential election, particularly since the most favored nations plan would not progress for at least a month.

A third order will encourage importation of cheaper medicines by states, wholesalers and pharmacies, an effort already in the works since last year. A fourth directs clinics that qualify for steep pharmaceutical discounts under a government program for low-income patients to pass savings on insulin and EpiPens directly to those patients. But it will only apply to about 1,000 community health centers, not to hospitals that are frequently flagged as diverting the discounts away from patients toward other programs.

The rollout capped a frantic 48 hours for the Trump administration, as officials debated what policies should be included in the passel of executive orders until just hours before the president was scheduled to sign them.

The fate of the so-called rebate rule was in question up to the final hours. HHS Secretary Alex Azar and chief of staff Mark Meadows have backed the policy. But Vice President Mike Pence and other White House officials voiced concerns that the rule would raise seniors’ premiums, and as late as Thursday it was off the table.

The final decision was made so late that multiple health officials learned what the final orders contained when the president publicly announced them.

Trump on Wednesday green-lighted three orders including importation, the insulin plan for needy patients and the favored nations rule that links certain Medicare Part B payments to lower prices for those medicines paid abroad. At the time he rejected a resurrection of the rebate rule that has split his administration for more than a year.

But those plans were thrown into limbo the next day amid intense outside pressure from the pharmaceutical industry, and renewed attempts inside the administration to convince Trump to reconsider his rebate rule opposition, three people close to the process said.

Internal debate over what policies Trump should ultimately call for spilled into Friday morning, with the rebate rule ultimately added back to the mix. “It is super chaotic,” one person with knowledge of the back-and-forth told POLITICO just hours before Trump formally announced the executive orders.

The favored nations plan, linking payments for Medicare Part B medicines to a basket of lower international prices, is vehemently opposed by the pharmaceutical industry and many conservative groups.

Trump gave the drug industry a month to come up with an alternative plan to kill the rule — which the administration once projected would save 30 percent on certain medicines — that has divided his party and administration. If drugmakers are successful, “we may not need to implement the fourth executive order, a very tough order,” he said.

Patient advocacy organizations have also raised concerns, saying the policy would not actually cut costs for patients but would slow or lessen incentives to develop new therapies.

“Right now the White House and Trump [are] trying to cut costs in Medicare and doing it at the cost of us,” Maria Town of the American Association of People with Disabilities said on a call with reporters ahead of the event.

The original favored nations proposal, then called the international pricing index, has sat at the White House’s budget office since last summer. Last fall, Azar said the administration was reworking the rule because Trump “did not find that satisfactory.”

With the presidential election less than four months away, industry and analysts are skeptical that any major moves can be completed before the November vote.

“The drug EOs are a way to give the appearance of movement on Trump’s pricing agenda without actually doing anything,” wrote Capital Alpha Partners’ Rob Smith in a note, adding that the original favored nations rule has languished with budget officials for more than a year. “A more impactful step would be to issue this actual proposed rule and begin the process of finalizing it rather than holding what amounts to a glorified press conference.”

The Trump administration unveiled a draft plan to let states import cheaper medicines from Canada late last year. But regulations have not been finalized and the bulk of responsibility lies on states to prove they can save money and still assure drug safety. While a number of states including Florida, Maine and Colorado have passed laws to import medicines, none has submitted a plan to the federal government yet.

Trump on Friday thanked Florida Gov. Ron DeSantis, who attended the signing, for being at the “forefront” of importation efforts.

“It is something Ron and I have been discussing since the time Ron get elected,” the president said of his longtime ally. “It takes a long time from a legal standpoint … we’ve got it all worked out.”

But critics of drug importation have called it a gimmick that would not lower patient costs. Canada itself has been reluctant to get on board, with officials pointing out that the country does not have enough supply to meet U.S. needs and that it would not be responsible for assuring safety.

The fourth order would compel federally qualified health centers collecting massive pharmaceutical discounts through a program called 340B to pass discounts on insulin and EpiPens along to low-income or uninsured patients. But it’s a narrow version of a policy that’s long been on the wish list of pharmaceutical lobbyists and a priority of vocal, mostly Republican, program critics in Congress.

The order does not apply to the hospitals that have been the focus of critics’ ire, but only to about 1,000 community health centers. By law, facilities that participate in the 340B program can use the money they take in from the discounts for nearly anything that serves needy patients. But critics accuse some hospitals of taking advantage of the lax rules to pad their operating budgets with little benefit to their community.

Alice Miranda Ollstein Democrats through an unusual procedural maneuver seized control of the Senate agenda to force a challenging vote for Republicans ahead of a...
Read more
US

Matt DixonMembers of the Proud Boys and other right-wing demonstrators march across the Hawthorne Bridge during an "End Domestic Terrorism" rally in Portland, Ore.,...
Read more