Trump takes back spotlight in ‘us vs. them’ war with... 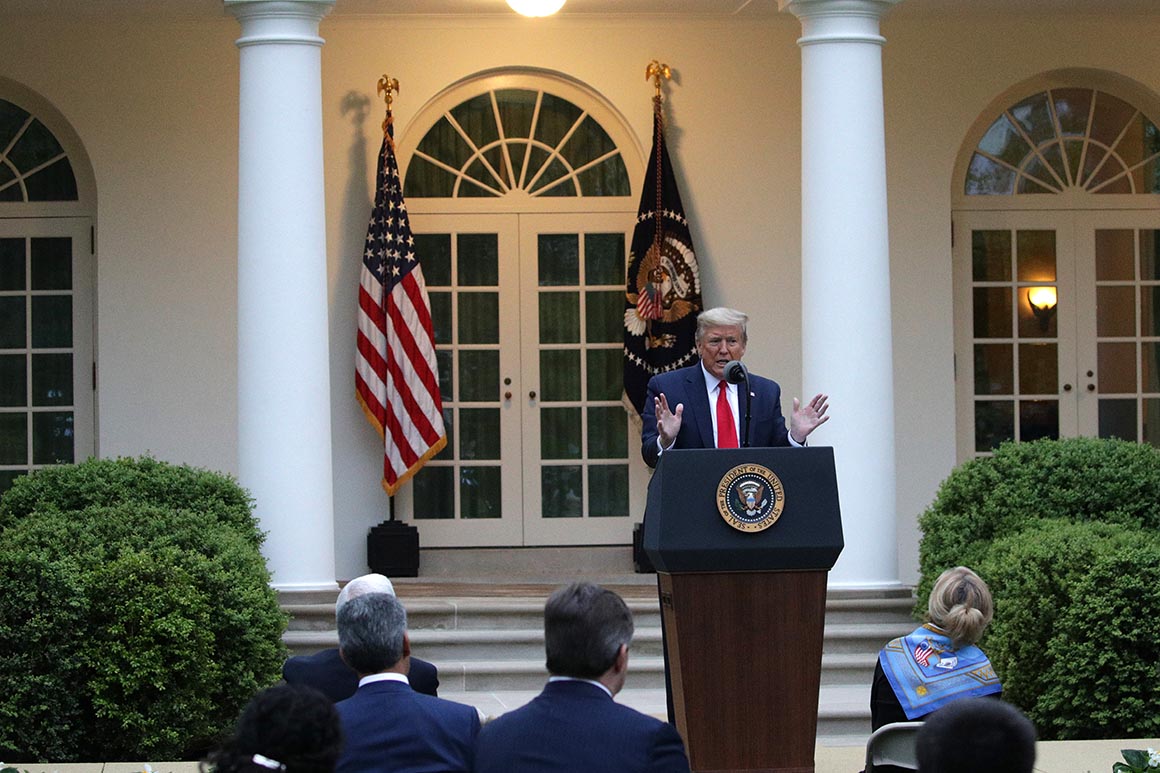 President Donald Trump has declared his latest “us vs. them” war — portraying himself as the valiant captain overseeing insurgent governors.

The battle lines were drawn as governors started banding together to create their own plans on restarting their economies amid the coronavirus pandemic. Trump jumped in to declare “total” authority over those decisions, mockingly comparing any resistance to “Mutiny on the Bounty” and proclaiming that states can’t simply have “Independence.”

To many allies, the president is merely asserting his crisis powers during an economically crippling pandemic that demands a strong response. But to governors, mostly Democrats, Trump is beating his chest about authorities that even some conservative legal scholars agree he doesn’t have, frustrated he might lose the spotlight, especially before November’s election.

“The governors have taken power from him,” said former Virginia Gov. Terry McAuliffe, a Democrat who served as National Governors Association chairman during Trump’s first year. “And for him, that is the worst, that he’s not viewed as the supreme leader. He idolizes all these folks around the globe who are dictators. He always says ‘look at the power this one has.’ … This is really going at his core.”

Trump could try to punish states that don’t abide by his orders, as he did when he refused to give money to so-called sanctuary states after they refused to share information with federal immigration authorities. Governors vowed to not be deterred.

"A lot of us governors on both sides of the aisle are conferring with one another, sharing our processes and are all navigating similar situations," said Michigan Gov. Gretchen Whitmer, a Democrat frequently in Trump’s crosshairs over her equipment requests, in an interview. "It will be bipartisan, it’s not about party — it’s not about anything other than doing the right thing on behalf of our citizens.”

The “us vs. them” narrative is a political tool Trump has employed throughout his presidency.

By his own admission, Trump is always fighting someone on behalf of Americans — Congress, scientists, courts, foreign countries, Democrats, even his own government. He’s picked on individual governors before on specific policies. But never has he engaged in a prolonged dispute with nearly all of them, including Republicans.

The fights are often a negotiating tactic and not an actual pronouncement of a looming policy. Trump has regularly threatened various opponents only to back down later after achieving minor concessions. He threatened to close the southern border to punish Mexico, but declined after the country took limited actions on immigration, including some steps that had been in the works for months. He threatened to “totally destroy” North Korea but then talked about falling in love with its leader Kim Jong Un after the dictator offered to negotiate. He threatened China for “letting the virus” spread but then praised its response after China confirmed it would still spend billions on American products as part of a prior trade deal.

And on Tuesday night, Trump similarly indicated he’d be willing to back down from his latest threat to the governors, saying he would talk to them by videoconference, likely Thursday.

“I’m not going to put any pressure on any governor to open,” Trump insisted at a news conference from the White House’s Rose Garden, predicting states will “know when it’s time to open.”

Yet he tried to retain the position of authority, saying he was “authorizing” each state to implement its own reopening plan. And before turning and walking away from his podium, Trump added a parting threat.

“If they don’t do a good job, we’re going to come down on them very hard,” he said. “We’ll have no other choice.”

Trump’s power proclamations, which started Monday and have continued despite disapproval from some conservative allies, set up a potential showdown between the president and the governors as he looks to pull the economy out of a deep recession before November’s election.

Former Republican Speaker Newt Gingrich, a Trump ally, said some of the president’s rhetoric comes from “a New Yorker who believes in counterpunching,” but said in this case the governors need the president.

“The president trumps the governors. That’s the reality of the system,” Gingrich said. “I strongly favor the president deciding but governors implementing.”

A former aide who is close to the White House hinted that Trump could punish states that don’t abide by his orders.

"He is the president of the United States. He decides commerce, not the states," the person said. "He could attach conditions to the money being doled out. This isn’t a debate."

As the coronavirus initially spread through the U.S., Trump declined to invoke a national shutdown, deferring to governors on decisions about schools, businesses and medical facilities. He eventually issued nonbinding social-distancing guidelines but only after several large states, including New York and California, had already acted.

Many governors have earned higher marks than Trump for their coronavirus response. A majority of Americans approve of the way their governor has handled the outbreak — as many as 70 percent — while under half approve of Trump’s response.

Despite his reluctance to issue a nationwide lockdown, Trump on Monday declared that he could make decisions on when states should lift their own shutdown orders. He declined to say what authority gives him that power.

The president does have powers governors don’t, including the authority to restrict international travel and close down borders, but no federal statute gives Trump the authority to override state orders, according to legal experts.

“There is no federal law, whether statutory or constitutional, that allows the president to issue an executive order vacating a declaration of emergency on the part of a governor or vacating a stay-at-home order a governor has issued as a result of that emergency,” said Claire Finkelstein, law professor at the University of Pennsylvania Carey Law School and director of the Center for Ethics and the Rule of Law.

For weeks, the president has careened back and forth between assuring Americans he and governors are getting along — even broadcasting their occasional praise of him in campaign ads — and blasting them over asking for medical supplies. He even accused them of hoarding ventilators.

“Many of them didn’t do their jobs,” Trump said Monday. “We helped some of the ones who didn’t know what they were doing.”

Trump said he told Vice President Mike Pence, the leader of the White House coronavirus task force, not to call governors he said were not "appreciative" enough of his efforts. “If they don’t treat you right, I don’t call,” Trump said.

And Jared Kusher, Trump’s son-in-law and senior adviser who is assisting with the pandemic response, suggested the strategic national stockpile, the stash of health care supplies created in 1998 to respond to terrorist attacks or natural disasters, is “supposed to be our stockpile. It’s not supposed to be states’ stockpiles that they then use.”

Some Trump allies are uncomfortable with Trump’s rhetoric and say it could hurt him as he runs for re-election in states hard hit by the virus or swing states, where he needs to appeal to moderates.

"The president should try hard to work collaboratively," said an outside Trump adviser. "His supporters generally love his antagonism vs. the media, but in a crisis moment like this one, a battle vs. governors does not serve the national interest, nor his political interest."

Still on Tuesday, Trump likened Democratic governors to those engaged in a mutiny and blasted Gov. Andrew Cuomo of New York, the epicenter of the outbreak. Cuomo said the president doesn’t have the authority over states but that he refuses to spar with Trump, who appeared to be “spoiling for a fight.”

“The president will have no fight with me,” Cuomo said at a news conference. “I will not engage.”

It’s not just Democrats. Some Republican governors, including those from Ohio, Maryland and New Hampshire, have insisted they have the power to decide when to reopen the states they closed.

A group of East Coast states — Delaware, Pennsylvania, New Jersey, New York, Connecticut, Rhode Island and Massachusetts, which has a Republican governor — have similarly agreed to create a committee of public health and economic officials to discuss reopening their economies. On the West Coast, the governors of California, Oregon and Washington also announced a joint approach.

“It’s the governors that are going to make decisions about when certain activities are allowed,” Sen Marco Rubio (R-Fla.) told CNBC on Tuesday. “Obviously, the guidance from the federal government coming from the White House is going to be very influential in that.”

Aware that Trump may be simply trying to pick a fight for show, many governors have tried to walk a fine line between pointing out the president’s shortcomings without drawing his fire.

At times, governors have criticized Trump for failing to provide states with enough tests and medical equipment and delaying his deployment of the Defense Production Act, a Korean War-era law empowering him to order manufacturers to produce ventilators and protective gear.

But at other times, governors, including Democrats like Govs. Gavin Newsom of California and Phil Murphy of New Jersey, have heaped praise on the president. Newsom offered only a subtle rebuke of Trump Tuesday.

"There is no light switch here, it’s more like a dimmer," Newsom said on Tuesday. "I know you want the timeline, but we can’t get ahead of ourselves and dream of regretting. Let’s not make the mistake of pulling the plug too early, as much as we want to."

‘US, back, spotlight, states, takes, them, Trump