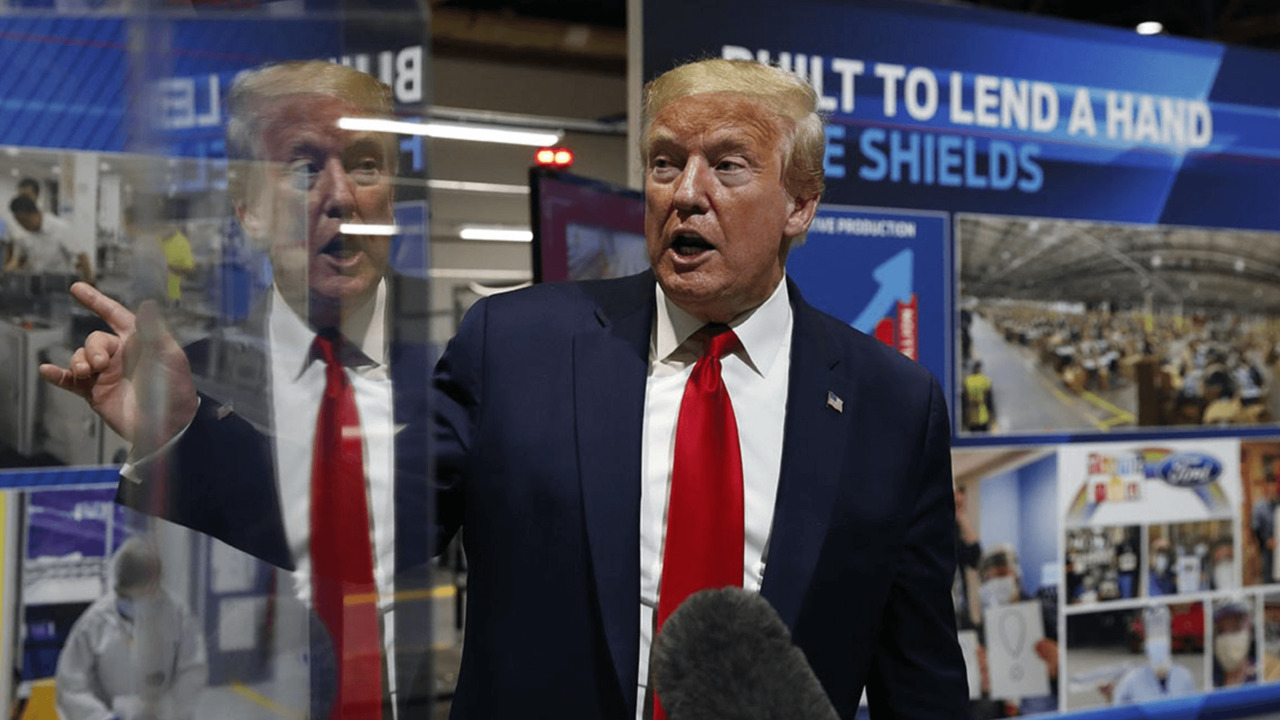 The president’s visit was the latest in Trump’s series of attempts to get out of Washington as he tries to win over public support for his administration’s handling of the coronavirus outbreak that has seized the world for months. Trump’s goal is to put a spotlight on partnerships between the government and private companies that have transformed their assembly lines to benefit health care workers and patients.

He has made similar swings through states like Pennsylvania, where he toured a medical equipment factory, and Arizona, where he checked out a plant making respirators.

Although the visits are official White House events, they have at times taken on characteristics of a 2020 campaign rally, with Trump’s signature rock songs blaring from the speakers before he makes remarks. He has also used the events to attack his political rivals, including likely Democratic nominee Joe Biden, and swat down critics who accuse the president of reacting slowly in the early stages of the coronavirus and failing to swiftly deliver tests and medical equipment.

Michigan — like other states Trump has visited recently — is a critical state in 2020 for president Trump, and one he narrowly won in 2016. He currently polls behind Biden in the state.

Michigan has been among the hardest-hit states during the coronavirus outbreak, with one of the largest caseloads and death totals, along with an unemployment rate of 22 percent — higher than the national unemployment figure of 14.7 percent.

The African American community has borne the brunt of the pandemic, highlighting the state’s racial disparities. African Americans represent 40 percent of all coronavirus deaths in Michigan, even though they account for just under 14 percent of the overall population.

Just as Detroit factories stepped up during a crisis moment to build bombers and tanks during World War II, Ford’s Rawsonville Components plant teamed up with General Electric Healthcare to manufacture thousands of ventilators needed to help patients struggling to breathe due to complications from the coronavirus.

“President Trump wants to celebrate these workers and their unending spirit and commitment on the frontlines of this war to save lives,” White House deputy press secretary Judd Deere said in a statement ahead of the visit.

The effort was part of a nationwide effort to ramp up ventilator production following concerns there were not enough ventilators to match the surge of coronavirus patients. The buoyed reserve that has resulted has now a point of pride for the administration. The president has called himself the “king of ventilators” and plans to send some of the expensive machines to other countries facing shortages. The Rawsonville plant has promised to manufacture 50,000 ventilators by July 4.

Yet the visit was not without controversy.

In the days leading up to it, questions were raised about whether or not the president would wear a mask while touring the facility, as the Ford plant requires for safety reasons. Trump previously opted to not wear a mask during a visit last week to the medical equipment factory in Pennsylvania.

Ford initially released a statement saying the plant notified the White House of its mask requirement, then later clarified the decision would be left to the White House. Michigan’s attorney general then wrote an open letter to the president saying it was his “legal responsibility” to wear a protective face covering, given current state orders.

“I ask that while you are on tour you respect the great efforts of the men and women at Ford — and across this state — by wearing a facial covering,” wrote Attorney General Dana Nessel.

On Thursday, Ford issued a statement saying CEO Bill Ford “encouraged President Trump to wear a mask when he arrived,” and that the president complied “during a private viewing of three Ford GTs from over the years.”

The statement added: “The president later removed the mask for the remainder of the visit.”

On Wednesday, Trump threatened to withhold federal funds from Michigan after accusing the state, without evidence, of “illegally” sending absentee ballots to voters.

“This was done illegally and without authorization by a rogue Secretary of State,” Trump tweeted. “I will ask to hold up funding to Michigan if they want to go down this Voter Fraud path!”

Later, he corrected his tweet — the state is sending only applications for absentee ballots, not actual ballots — and said it might not be necessary to withhold any funds. But he still expressed anger over the state’s strategy on Thursday, claiming without evidence at several points that it would lead to fraud.

“We don’t want anyone to do mail-in ballots,” he said before departing the White House. “Now, if someone has to mail it in because they’re sick or by the way because they live in the White House and they have to vote on Florida, and they won’t be in Florida and there’s a reasoning for it, that’s OK.”

The president’s visit also comes at a fraught time for the state as Midland County, located north of Detroit, faces catastrophic flooding that has forced thousands to evacuate their homes. Trump’s schedule did not include a visit to the devastated area. And Michigan Gov. Gretchen Whitmer was not invited to meet the president while he was on the ground in Michigan.

Trump on Thursday offered assurances that the federal government would support the local recovery, including with Federal Emergency Management Agency staffers.