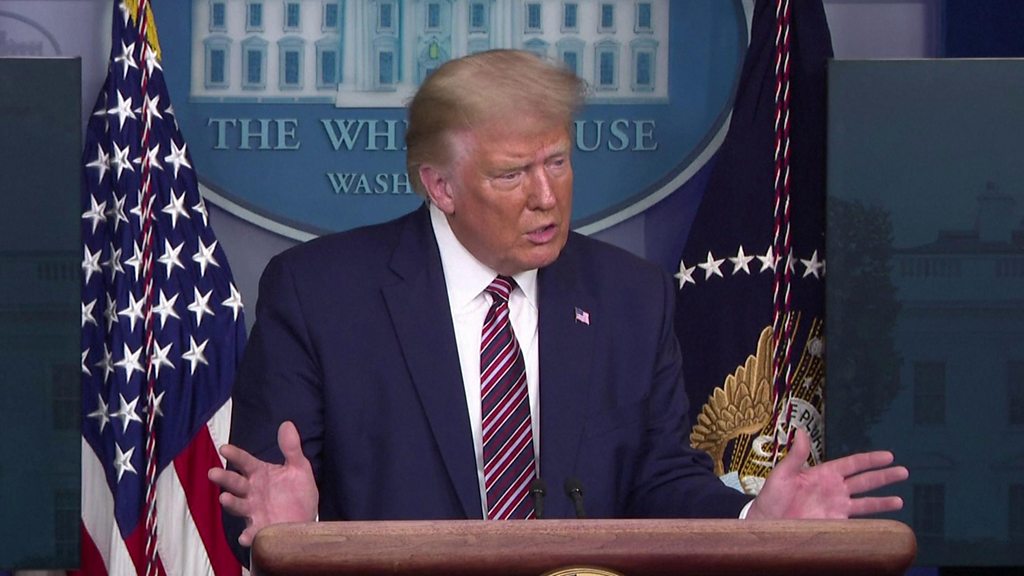 Nancy Pelosi, Speaker of the House of Representatives, asked whether Mr Trump owed money to foreign interests, following an article on his financial records by the New York Times.

Speaking on NBC, Ms Pelosi said the report showed that “this president appears to have over $ 400m in debt”.

“To whom? Different countries? What is the leverage they have?” she asked, adding: “So for me, this is a national security question.”

“The fact that you could have a sitting president who owes hundreds of millions of dollars that he’s personally guaranteed to lenders, and we don’t know who these lenders are,” she said, and suggested that Mr Trump may be indebted to Russian President Vladimir Putin.

“What does Putin have on the president politically? Personally? Financially?”

According to the explosive report in the New York Times – which says it obtained tax records for Mr Trump and his companies over two decades – Mr Trump paid no income taxes at all in 10 of the previous 15 years. It adds that the president is personally responsible for more than $ 300m in loans, which will come due in the next four years.

It does not suggest Mr Trump received any previously unknown income from Russia, though it said that the president had earned some money from foreign sources.

The records reveal “chronic losses and years of tax avoidance”, it says.

In a tweet on Monday, the president accused the media of bringing up his taxes and “other nonsense with illegally obtained information & only bad intent”.

He said he had “paid many millions of dollars in taxes” but received tax credits as well. Responding to the accusations of losses, Mr Trump added he had “very little debt” compared to the value of his assets.

Mr Trump has faced legal challenges for refusing to share documents concerning his fortune and business. He is the first president since the 1970s not to make his tax returns public, though this is not required by law.

The New York Times said the information scrutinised in its report was “provided by sources with legal access to it”.

The report came just days before Mr Trump’s first presidential debate with his Democratic rival, Joe Biden, and weeks before the 3 November election.

What are the key claims?

The New York Times said it reviewed tax returns relating to President Trump and companies owned by the Trump Organization going back to the 1990s, as well as his personal returns for 2016 and 2017.

It said the president paid just $ 750 in income taxes in both 2016 and 2017, while he paid no income taxes at all in 10 of the previous 15 years, “largely because he reported losing much more money than he made”.

The newspaper also claims that “most” of Mr Trump’s biggest businesses – such as his golf courses and hotels – “report losing millions, if not tens of millions, of dollars year after year”.

The report also alleges that some of President Trump’s businesses have received money from “lobbyists, foreign officials and others seeking face time, access or favour” from the president. He is alleged to have made $ 73m in revenue from abroad in his first two years at the White House.

Much of that came from his golf courses in Ireland and Scotland, but the Trump Organization also received money “from licensing deals in countries with authoritarian-leaning leaders or thorny geopolitics”, according to the New York Times.

The report says there is evidence that Mr Trump reduced his taxable income in 2017 by paying $ 747,622 in consulting fees to Ivanka Trump, his daughter and senior adviser.

He is also reported to have written off more than $ 70,000 in hair-styling costs as business expenses during his time on his television show, The Apprentice.

Before becoming president, Mr Trump was known as a celebrity businessman and property mogul, building an image of a hugely successful self-made billionaire which could be dented by the latest revelations, observers say.

According to the US Bureau on Labor Statistics, the average American household paid $ 9,302 in federal income tax in 2018, on an average earnings figure of $ 78,635.

In an annual financial disclosure that he is required to make as president, President Trump said he made at least $ 434.9m in 2018. The newspaper disputes this, alleging that his tax returns show the president had instead gone into the red, with $ 47.4m in losses.

What has the reaction been?

Mr Trump and the Trump Organization denied the allegations in the report, but the president’s critics condemned his tax arrangements.

Ms Pelosi described the alleged tax avoidance as an insult to America’s working families, as well as raising the national security question.

Democratic presidential candidate Joe Biden has not commented so far, but his campaign team highlighted on Twitter that teachers, firefighters and nurses all paid much more than $ 750 in tax.

Unwanted distraction for Trump or more?

So this is what Donald Trump has been keeping out of public view for all these years?

The president’s tax returns, according to the New York Times, do not provide evidence of a nefarious connection to Russian mobsters or other shady figures, as some have speculated. Instead, they show that the real estate and reality television mogul’s financial empire is built on sand – haemorrhaging money, hundreds of millions of dollars in debt, and arranged to pay almost nothing in federal taxes.

These arrangements will be closely scrutinised in the coming weeks, with moves of questionable legality making their own headlines.

Mr Trump has boasted in the past of his ability to take advantage of every loophole in what he says is a corrupt tax system. When he’s not denying this report, he may offer a similar defence – and his supporters will probably find that sufficient. The Americans who are outraged that they paid more in taxes than the billionaire US president are probably already against him.

The Times story, however, is yet another unwanted distraction for the president. Every day spent on it is one the Trump campaign can’t focus on changing the dynamic in a race that appears tilted against him.