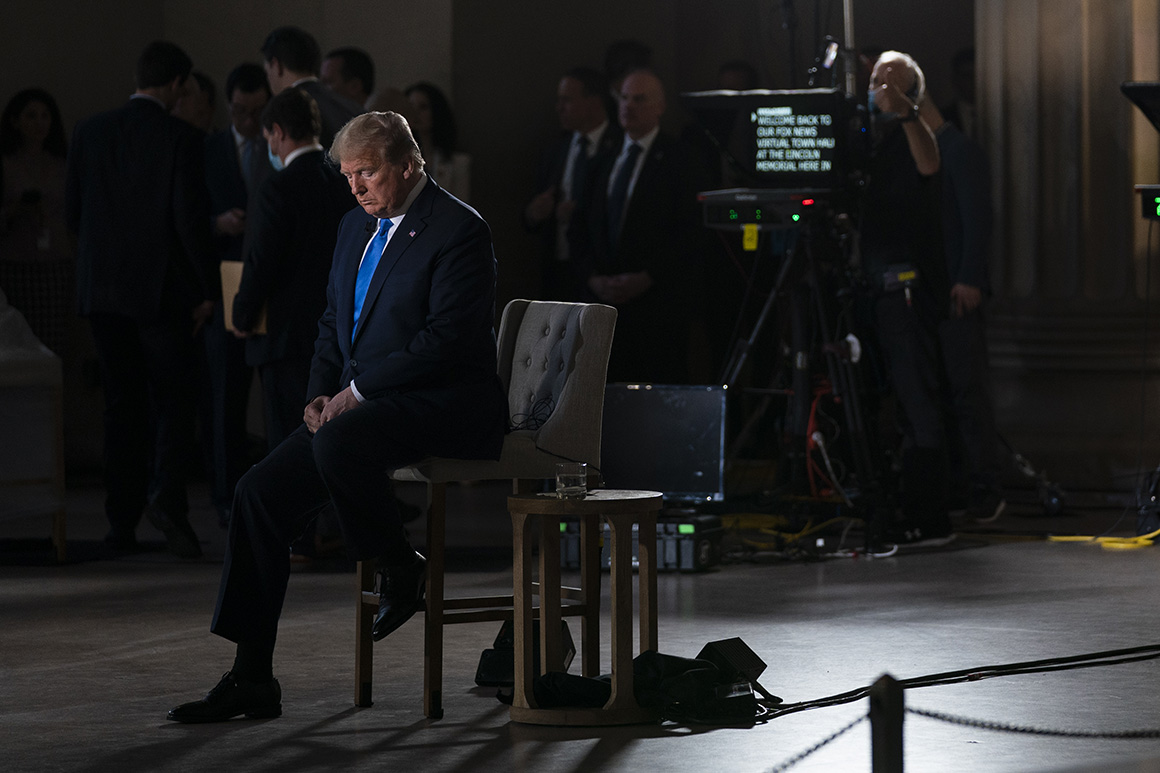 President Donald Trump has always preferred to play cheerleader rather than the bearer of bad news.

And he’s preparing to spend the coming weeks cheering for a swift economic bounce back from coronavirus — launching proposals to accelerate the recovery despite uneasiness among health care experts about the scale of testing, persistent worries from many workers and businesses and a death toll that keeps eclipsing his own expectations.

Trump kicked off the week with a two-hour Fox News virtual town hall to hype the initial reopening of economies in more than a dozen states, even as his own public health experts and advisers expressed renewed concerns about the ongoing spread and lack of firm control over Covid-19.

“I think we’re going to have an incredible following year,” Trump said from the Lincoln Memorial. “We’re going to go into a transition in the third quarter, and we’re going to see things happening that look good. I really believe that. I have a good feel for this stuff.”

It was a classic split-screen moment for the Trump administration, with the president leaning so heavily on his economic message that the health concerns surrounding a pandemic appeared secondary. Trump’s former Food and Drug Administration commissioner, Scott Gottlieb, warned Sunday of a potential explosion of new cases if states allowed workplaces, schools or other public areas to “let their guard down.” Gottlieb delivered the somber message as Trump returned from a weekend at Camp David, where he was surrounded by top advisers, including son-in-law Jared Kushner and National Economic Council Director Larry Kudlow who support the president’s economic push.

The Trump White House is preparing a proposal for tax and regulatory changes to boost the economy that it tentatively plans to release at the end of this week, according to interviews with eight former and current senior administration officials and Republicans close to the White House.

The president spent the weekend weighing the recommendations of his top advisers about which policy levers the White House should push to juice the economy in the third and fourth quarters — a list compiled by chief of staff Mark Meadows, Kushner, Kudlow, economic adviser Kevin Hassett and deputy chief of staff Chris Liddell.

“The president is eager to shepherd this economy again,” said Bryan Lanza, a former top official from Trump’s 2016 campaign. “It was sidelined by a bunch of unelected scientists, and now he is looking at it as an opportunity to do what America hired him to do: Act as the CEO and guide this huge mass of bureaucracy through these challenging times.”

Promoting a future economic boom carries its own political risks for the president, as the U.S. coronavirus death toll soars to more than 60,000 people — with no vaccine expected in the coming months of reopening. On Sunday, the president said the coronavirus response would be considered a success if 80,000 to 90,000 people died, moving the goal post after signaling in recent weeks a death count below current levels.

The president sees urgent economic action as critical as the economic devastation widens on his watch. Economic growth has collapsed from a sharp pullback in consumer spending and the shuttering of millions of businesses including restaurants, retail stores and hotels.

Roughly 30 million Americans have filed for unemployment benefits in the past six weeks. The Labor Department on Friday will release its latest measure of national unemployment, which Hassett has warned could be as high as 16 percent compared with March unemployment of 4.4 percent. Some private economists expect the figure to come in closer to 20 percent.

Many businesses and workers are bracing for the pandemic to spike again this fall amid flu season, even as many areas of the nation struggle to get the current phase of the outbreak under control. Those worries could restrain any economic resurgence or hit the stock market harder just ahead of the general election in November.

The economic damage is expected to hit far harder in the second quarter than the first, putting the entire year on track for a deep downturn even if the second half of the year delivers the boost Trump forecasts. Health experts have said a vaccine is unlikely to arrive until next year, if one even emerges, though Trump repeatedly said on Sunday he believes there will be a vaccine by the end of this year.

The grim economic data is propelling the Trump administration to consider a raft of ideas to stimulate the economy, which advisers see as the president’s most potent reelection message. Among them is a cut in payroll taxes, or a suspension altogether — an idea the president has championed for months, but one that would need to pass a divided Congress. Trump said at the Fox News town hall that a payroll tax cut would be a necessary part of the next congressional package.

“They have not lost their passion for a payroll tax holiday,” said Rohit Kumar, leader of PwC’s Washington tax services group and the former domestic policy director for Senate Majority Leader Mitch McConnell, noting that Trump wanted such a provision in the phase-three coronavirus rescue package.

White House aides have also seriously discussed expanding the business-expense deduction or allowing businesses to write off new investment such as equipment costs.

For individual taxpayers, aides have discussed sending an additional stimulus check — in addition to the $ 1,200 per person that many Americans started receiving in recent weeks.

They’re also weighing whether to extend the deadline to file taxes until this fall. The IRS already extended the usual April 15 deadline to July.

Aides have fielded a range of ideas from policy experts, agency officials and the business community as it struggles to settle on the best course of action.

On the regulatory front, aides from the White House, Office of Management and Budget and counsel’s office are exploring ways to accelerate the completion of regulatory cutbacks already in the pipeline.

A blueprint released by The Heritage Foundation’s National Coronavirus Recovery Commission caught the attention of White House aides with its 47 suggestions for reopening the economy. Those include the White House not enforcing regulations for small businesses and making permanent some of the regulatory tweaks the federal government made during Covid-19 at the FDA, Department of Health and Human Services or the Environmental Protection Agency.

White House aides want the next congressional package to include liability protections for businesses that bring their employees back to their workplaces, a move McConnell has pushed.

Trump also expressed optimism on Sunday night about including infrastructure spending in any potential congressional legislation because historically it has had bipartisan support.

The exploration of new proposals come as business leaders urge the White House to offer more specific guidance on reopening the economy, fearing chaos from the patchwork of approaches now underway.

“No matter how good every company’s transition plan is … public confidence will be undermined, and the speed of the reopening will be dramatically slowed, if we’re all doing different things,” Josh Bolten, president and CEO of the Business Roundtable and former chief of staff to President George W. Bush, said at a White House event last week. “Now we think, since we are now on the cusp of many places being ready to reopen more fully, we think more specific guidance is needed.”

For now, states are following guidelines set by their governors — so what is recommended in Ohio may be different than Florida or Alabama, and states are not necessarily following the federal government’s suggestions for the first phase of re-opening.

Dr. Deborah Birx, the White House’s coronavirus response coordinator, said Sunday on “Fox News Sunday” that businesses such as salons and spas should not reopen in Georgia and other states because it was still too soon.

But over the weekend, Florida Gov. Ron DeSantis indicated he is on the cusp of clearing salons and barbershops to resume business as the Sunshine State began its first phase of reopening on Monday.

The Republican governor said he is rethinking what qualifies as an “essential” business, calling the current definition “simply inadequate.”

“If this is your business, it sure as heck is essential to you,” DeSantis said Saturday, sitting in a barber’s chair at an event inside an Orlando salon. “And if you have a job in one of these industries that some government official says is non-essential, I’m pretty sure you think that’s essential, too.”

Andrew Atterbury contributed to this report.