Trump to launch first 2020 ad blitz after erupting over... 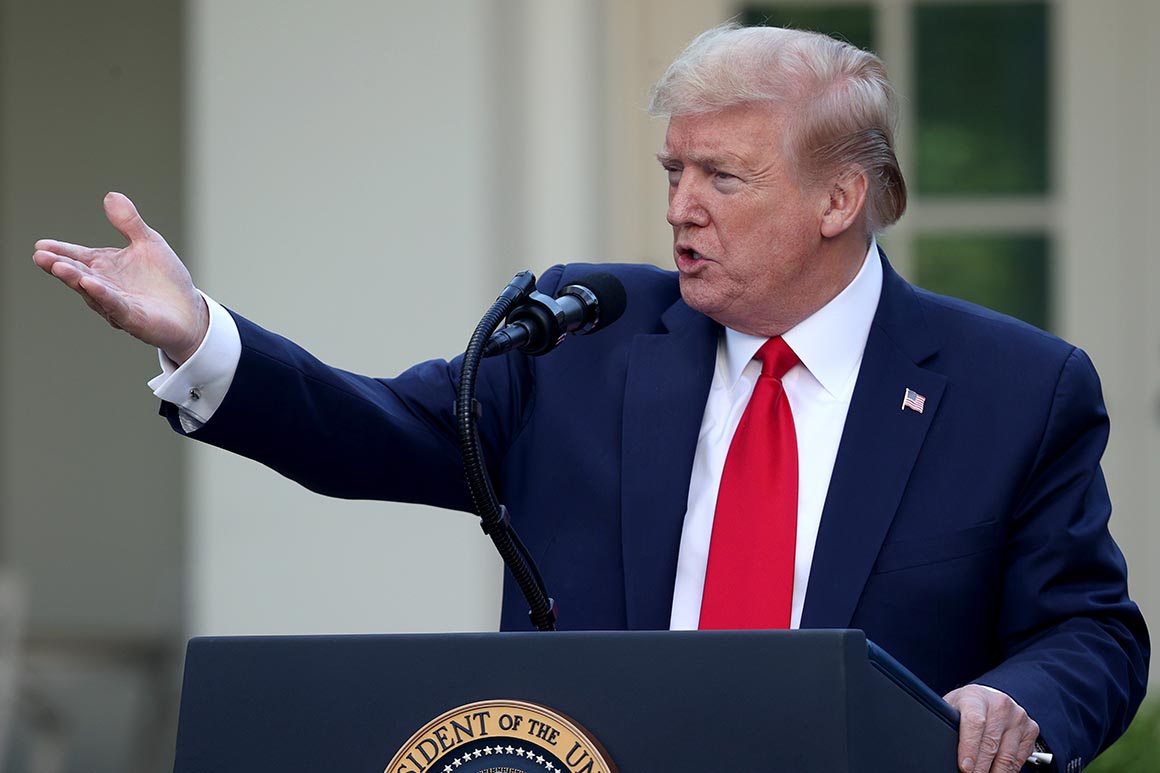 Donald Trump’s reelection campaign is about to launch its first major TV ad offensive of the general election — a move that comes as the president attempts to reverse a dangerous slide six months out from the election.

The campaign is expected to spend seven figures on a nationwide advertising blitz touting Trump’s performance managing the coronavirus crisis, according to two people familiar with the plans. The spots will begin Sunday and air for a week.

The campaign expected to follow with a second wave of ads unloading on Joe Biden.

The push comes at a trying moment for the president. Trump’s political advisers last week briefed him on internal polling showing him trailing Biden in battleground states, prompting the president to scold his campaign manager, Brad Parscale. The campaign’s polling also showed that an initial surge in support for Trump over his handling of the crisis has evaporated.

The first flight of ads will depict Trump as showing leadership in the face of opposition from Democrats and the media, people familiar with them said. The spots will also highlight Trump’s determination to restart the devastated economy.

The offensive marks a new and more urgent stage in the campaign. Concerned about appearing overly political in the middle of a public health crisis, the reelection effort had resisted going on the air during the coronavirus. The change of course comes amid growing worry among top Republicans about the president’s political prospects this fall.

Republicans for weeks have been grappling with how to position Trump for November as the coronavirus consumes his reelection campaign. While the Republican National Committee has waged a massive effort aimed at highlighting Trump’s leadership, reelection aides have embraced a tougher approach. In the coming weeks, the campaign is expected to launch a swing state barrage aimed at portraying Biden as cozy with China, where the virus originated.

With attention focused squarely on the White House’s response to the virus — and Biden holed up at home in Delaware and largely outside the spotlight — Trump aides worry the election is turning into a referendum on the incumbent. Attacking Biden could help change the dynamic, they argue.

Further magnifying the sense of alarm has been a concerted, multimillion-dollar Democratic ad blitz portraying Trump as ineffective in his handling of the pandemic. The liberal super PAC Priorities USA started airing a commercial this week declaring that Trump was "failing America."

The internal debate over how to improve the president’s standing has intensified in recent weeks. White House counselor Kellyanne Conway, Trump’s 2016 campaign manager, has advocated for airing positive commercials highlighting Trump’s leadership rather than China-themed attack ads against Biden.

The president decided recently to delay an anti-Biden broadside. He has wondered aloud whether he risks damaging Biden too early by hitting him now instead of waiting until closer to the election.

The deliberations underscore the degree of unpredictability the pandemic has injected into the race. Trump planned to run on a booming economy. Instead, coronavirus has triggered staggering job losses and sowed deep uncertainty about when a rebound might come.

Senior Republicans have been watching Trump’s daily briefings with growing alarm, and many winced last week when he suggested that injecting people with disinfectant and sunlight might help ward off the virus.

During a phone session with Trump to update him on his poll numbers last week, Parscale and RNC Chairwoman Ronna McDaniel urged the president to scale back his daily briefings. Trump has seemed to take the advice, holding fewer sessions with the media and being more disciplined when he does.

Trump aides say public opinion of his handling of the pandemic has stabilized in recent days.

The reelection campaign has a massive war chest — nearly $ 100 million as of the end of March, about four times as much as Biden. In addition to airing TV commercials, the campaign will be running online ads and launching a phone-banking effort echoing a similar positive message.

Parscale, who directed the digital effort on Trump’s 2016 campaign, has told people he is particularly focused on TV, saying it will have a bigger impact on the election than online advertising. With Americans at home, Parscale has privately said he views television as an ideal medium to reach voters and make the case for Trump’s presidency.

“Americans can see that President Trump has been in command and leading the nation through the coronavirus crisis,” Trump campaign spokesman Tim Murtaugh said of the forthcoming positive advertising campaign. “This ad reinforces that.”