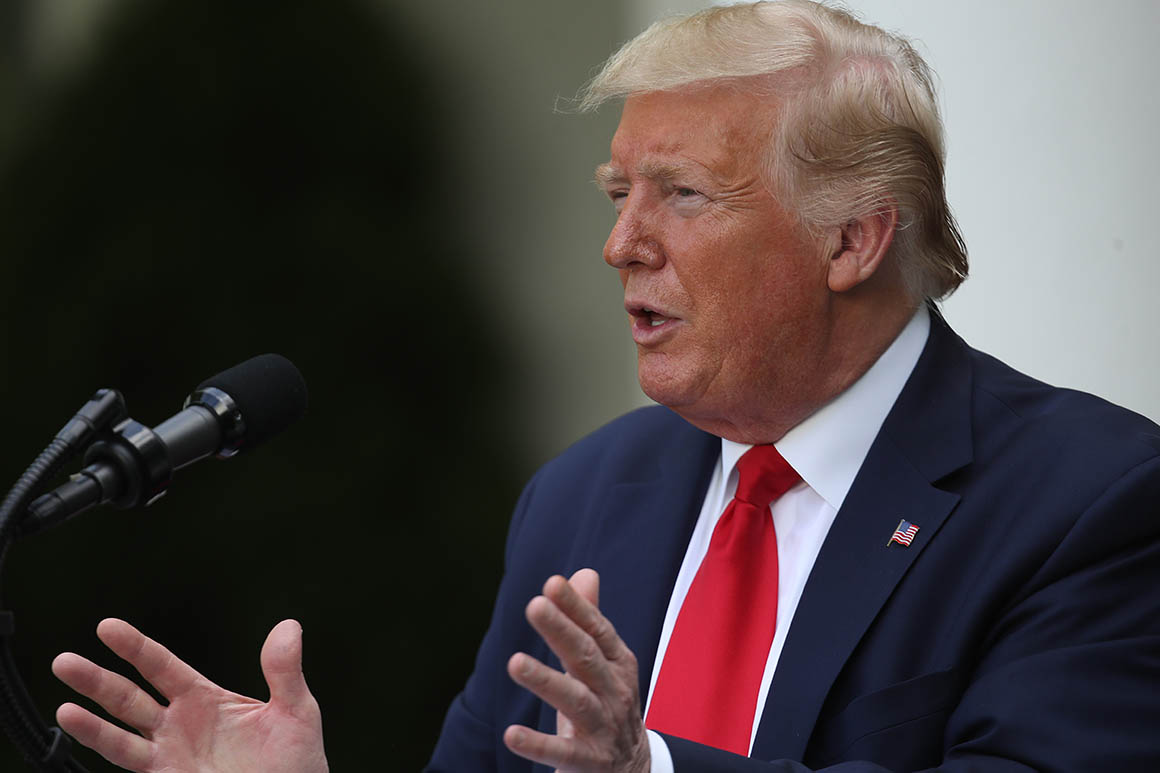 Any attempt to go after the tech companies through regulations could face serious obstacles, however. The president’s own regulators have shown little appetite in the past for taking on scrutiny of tweets and Facebook posts, and federal courts have ruled as recently as Wednesday morning that social media companies are private entities with the legal right to police content on their sites.

Trump and his supporters have been hammering Twitter since the social network labeled a pair of his tweets with a fact-checking notice for the first time on Tuesday, and the president pledged Wednesday that “big action” will follow.

Twitter acted after Trump had alleged without evidence that mail-in ballots are likely to be “substantially fraudulent,” in tweets that the company said contained misleading information about the electoral process. The move triggered an array of rebukes from Republicans, including Trump.

“Big Tech is doing everything in their very considerable power to CENSOR in advance of the 2020 Election. If that happens, we no longer have our freedom,” Trump tweeted late Wednesday night to his 80 million Twitter followers, after sounding the same theme more than 14 hours earlier. “I will never let it happen! They tried hard in 2016, and lost. Now they are going absolutely CRAZY. Stay Tuned!!!”

Early Wednesday morning, he had vowed to “strongly regulate” biased social media companies, or even “close them down.”

Democrats, meanwhile, have complained that Twitter has been too slow to respond to a litany of abusive, inaccurate or inflammatory tweets from the president, including his recent insinuations that MSNBC host Joe Scarborough may be guilty of murder.

POLITICO reported last year that the White House was circulating a draft executive order to address long-standing accusations from conservatives about bias by social media companies. CNN later reported that the order would task the Federal Communications Commission with developing regulations to clarify when social media companies qualify for crucial liability protections, and would have the Federal Trade Commission “take those new policies into account when it investigates or files lawsuits against misbehaving companies.”

But the executive order was never unveiled, and even Trump’s appointees at those agencies have expressed little appetite for scrutinizing tweets and Facebook posts.

That proposal targeted the online industry’s prized liability shield over user-generated content, Section 230 of the Communications Decency Act. The 1996 law broadly protects websites from lawsuits over what their users post, and for taking good-faith efforts to curb illicit material.

But those protections, which have been fiercely defended by the tech industry, have come under scrutiny from officials on both sides of the political spectrum. Republicans have charged that the shield has enabled social media platforms to crack down on their viewpoints with impunity. There’s no conclusive evidence of an anti-conservative bias on social media, and the companies have consistently denied the charges.

Trump’s dust-up with Twitter rekindled Republican calls for Congress to roll back the legal shield.

Rep. Matt Gaetz (R-Fla.), a Trump surrogate who has accused Silicon Valley firms of censorship, announced Wednesday that he’s drafting his own proposal to roll back those protections if companies engage in “editorializing” or “opine as to the truth or falsity” of statements online, like those made by Trump regarding mail-in ballots. Gaetz said he is “working with my Republican colleagues on the Judiciary Committee” on the legislation, but did not elaborate on the timing for its introduction.

In a similar vein, GOP tech critic Sen. Josh Hawley (Mo.) wrote in a letter to Twitter CEO Jack Dorsey on Wednesday that the company’s “decision to editorialize regarding the content of political speech raises questions about why Twitter should continue receiving special status and special immunity from publisher liability under Section 230 of the Communications Decency Act. “And he later teased on social media plans for a separate proposal to “end these special government giveaways.”

“If @Twitter wants to editorialize & comment on users’ posts, it should be divested of its special status under federal law (Section 230) & forced to play by same rules as all other publishers. Fair is fair,” Hawley tweeted.

Some Democratic lawmakers have also advocated restricting the industry’s Section 230 protections, but for very different seasons — such as failing to fact-check politicians like Trump.

The GOP calls got rhetorical support Wednesday night from FCC member Brendan Carr, a Republican who some see as a potential future chairman of the agency. Appearing on Fox News’ “Tucker Carlson Tonight,” he singled out Twitter’s fact check of Trump’s tweets as imposing a “partisan political viewpoint” and slammed Facebook’s recent creation of an independent review board to review the company’s content decisions.

“I think going forward if these entities want to be political actors … like every other political actor, they have First Amendment rights, though they shouldn’t necessarily have these special bonus protections that only that set of political actors have in Section 230,” Carr said.

The Republican commissioner also blasted these social media companies for framing themselves as politically neutral before Congress and then engaging in what he deemed utterly partisan behavior. “That’s the type of unfair or deceptive business practice that would get a lot of other companies under a lot of federal scrutiny, including from the Federal Trade Commission,” Carr remarked.

Even Facebook CEO Mark Zuckerberg has taken a jab at Twitter, telling Fox News in an interview made public Wednesday that social media companies “shouldn’t be the arbiter of truth of everything that people say online.” Still, Zuckerberg expressed skepticism about the president’s threat to “strongly regulate” social media companies or even “close them down” if they “silence conservative voices.”

“In general, I think a government choosing to censor a platform because they’re worried about censorship doesn’t exactly strike me as the the right reflex there,” Zuckerberg said.

The White House’s announcement of an incoming executive order Wednesday triggered fears in Washington tech circles that the Trump administration will revive its push to empower regulators to reconsider those liability protections — though major questions remain about how it would be executed.

The push to weaken Section 230 has also faced opposition from within Trump’s own party. Rep. Cathy McMorris Rodgers (R-Wash.), the top Republican on the House Energy & Commerce consumer protection subcommittee, cast such campaigns as ill-conceived.

“I want to be very clear: I’m not for gutting Section 230. It’s essential for consumers and entities in the internet ecosystem,” she said at a House hearing in October. “Misguided and hasty attempts to amend or even repeal Section 230 for bias or other reasons could have unintended consequences for free speech and the ability for small businesses to provide new and innovative services.”

The push to have the government step in on social media moderation practices even drew a rebuttal from Carr, who last year criticized Zuckerberg for suggesting that public officials should assume a role in setting rules for vetting speech on social media. “Outsourcing censorship to the government is not just a bad idea, it would violate the First Amendment,” Carr tweeted then. “I’m a no.”

Secretary of State Mike Pompeo also weighed in Wednesday against government interference in the online world — in a tweet apparently that seemed aimed at countries like China instead of Trump.

“The U.S. stands against, and will not tolerate, government-imposed Internet shutdowns and other forms of censorship during or after this pandemic,” Pompeo wrote.

Meridith McGraw and John Hendel contributed to this report.