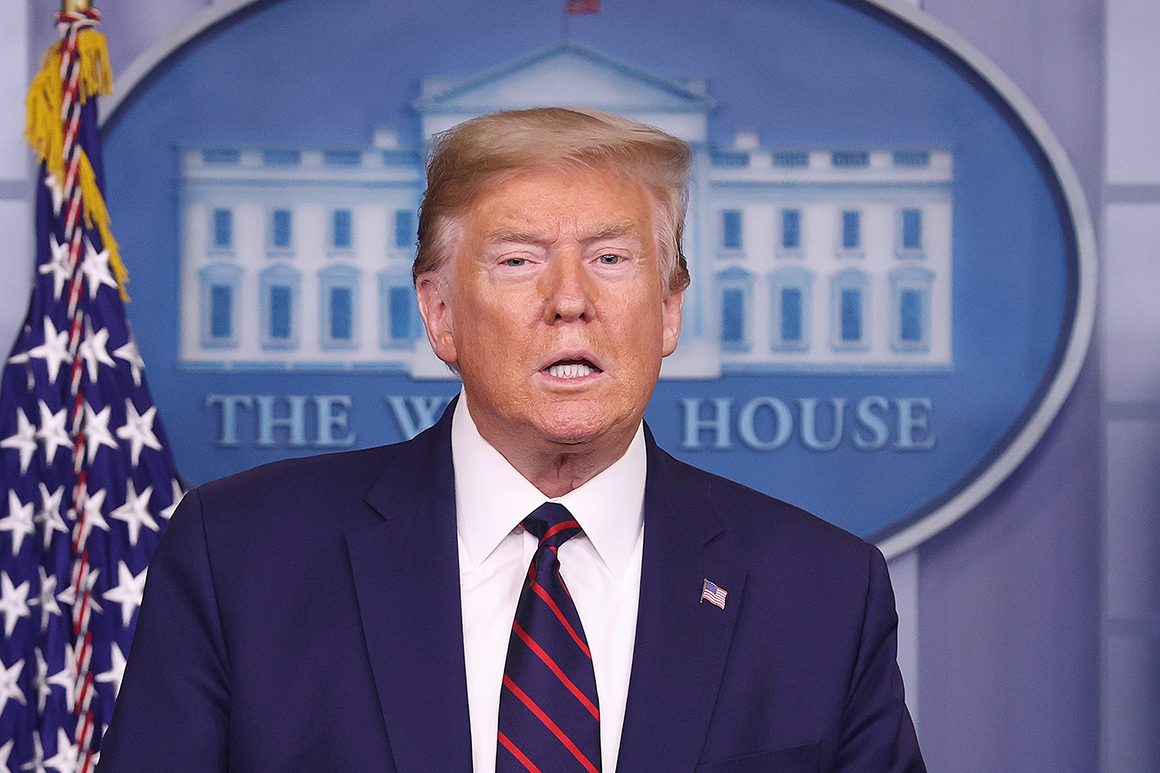 The fundamental pillars of Donald Trump’s presidency — a hot economy, strong job growth and a rocking stock market — are all being smashed to splinters by the ravaging coronavirus, which has shuttered much of the nation and now officially ended a streak of 113 months of job gains dating back to the end of the Great Recession a decade ago.

The latest numbers out Friday showed a loss of 701,000 jobs in March and the unemployment rate rising to 4.4 percent from a 50-year low of 3.5 percent. But the figures, though higher than expected, were just a small taste of the nightmare ahead. Friday’s numbers covered just the first two weeks of March, before many of the lockdowns and layoffs began.

The nation has seen 10 million new jobless claims over just the last two weeks, obliterating previous records and suggesting the unemployment rate is already above 10 percent, eclipsing the highest point of the Great Recession.

It will almost certainly go significantly higher, with some economists warning it could top the 24.9 percent hit during the Great Depression. April’s jobs numbers, due in early May, could show a staggering and historic loss of up to 15 million jobs or perhaps more, many forecasters say.

The coronavirus outbreak was obviously not Trump’s fault, though many criticize the speed of the administration’s response as the president publicly downplayed the threat for months. But that does not change the stark reality that all the job gains on Trump’s watch are now gone.

The impact of his chief legislative achievement — a big tax-cut bill heavily focused on corporations — is now moot after mostly delivering stock buybacks and dividend payments rather than a boom in corporate investment. Perhaps the big increase in corporate investment would have eventually materialized. But now we will never know.

Economic growth is dropping off a cliff, with estimates for a first-quarter decline of around 4 percent and a second-quarter plunge of 25 percent or more. Stocks have crashed around 30 percent since setting record highs in February. Oil prices are tanking, which means cheap gas but also a massive hit to the energy sector, slamming red states the hardest and undermining Trump’s boast of America’s energy dominance.

Trump will head into reelection as the economy struggles to dig out of a deep recession that some economists fear could become a depression. The pieces are in place for Trump to wind up like Herbert Hoover, who saw his presidency destroyed by the Depression and his response. Trump’s challenge will be to quickly reverse that impression by rallying Republicans to enact even more deficit-fueled spending and social programs, forcing the president to appear more like Franklin D. Roosevelt and less like the smaller-government conservatives who helped fuel his rise to the White House.

“The economic and social underpinnings of the Trump era are giving way to the economic logic of pandemics,” said Joseph Brusuelas, chief economist at financial firm RSM U.S. “In a clear-eyed, sober assessment, if on November 3, 2020 there are more than 100,000 dead and the unemployment rate is at 15 percent, Trump is not going to get reelected. We could resurrect George Washington and Thomas Jefferson and I doubt they could survive that either.”

There are other possible outcomes, of course.

If efforts to restrain the growth of the virus succeed quickly and if an effective vaccine is discovered sooner than expected, then perhaps the economy can recover faster than many expect. The Trump administration, Congress and the Federal Reserve moved relatively quickly to pump trillions of dollars into the economy to stem the flood of layoffs and push money into the pockets of millions of Americans — potentially creating conditions for a sharp, V-shaped bounce-back in the economy.

Some of those efforts — especially emergency loans to small businesses — are off to a rocky start with many large banks like JPMorgan Chase saying the rules are not clear enough for them to start making loans. It also may take weeks for millions of Americans to get their direct cash stimulus payments.

But the president is nothing if not a master of reframing the narrative in any way he deems helpful. And early positive poll numbers for his handling of the virus — though now fading — suggest there is at least the possibility that he could campaign as the president who beat back the virus and got the economy moving forward again after taking such a massive punch to the face. But that requires an awful lot of things to go remarkably — if not impossibly — right. And thus far that has not happened.

“He can still resurrect his agenda — if the virus tapers off by summer,” said Gregory Valliere, chief U.S. policy strategist at AGF investments. “But he’s in danger of losing in November, and the risks are growing daily. The public will not give him high grades for anticipating and dealing with this crisis. But he’s a master salesman and could spin a story by October that things are turning around. But the Democrats’ ads will just keep repeating his dismissive comments on the virus from this March.”

Other analysts note that Trump’s odds of winning in online betting markets have actually risen during the coronavirus crisis. And the nation is now so polarized — and Trump’s base support so solid — that the presidential election will likely be close no matter what happens with the economy.

“He can certainly win if this turns into a fast recovery and he can point to an improving trend and take credit for it,” said Scott Clemons, chief investment strategist at Brown Brothers Harriman. “And he can make the argument, which has been made before, that ‘How do you fire a war-time president in the middle of the fight?’”

The question is whether it appears that Trump is a war time president who is losing the fight.

Most economists suggest the economic hit from the coronavirus will be vastly higher in the April jobs report, due out on May 8. That figure is likely to send shock waves through Washington and Wall Street and underscore the challenge Trump faces in avoiding a Hoover-style loss in November.

“Given the close to 10 million initial claims for unemployment insurance the economy will lose closer to 15 million jobs in next month’s report for April,” said Mark Zandi, chief economist at Moody’s Analytics. “The economic damage is due to the business shutdowns across the country necessary to contain the virus. GDP is over one-fourth lower today as a result of the impact of the fallout.”

Trump and other White House advisers have regularly lamented that the economy was booming before the coronavirus hit and should have set up the president for a strong run to reelection. They now know that the president’s future depends on a quick decline in new coronavirus cases and a fast snap back in the economy in the second half of the year.

Trump himself has cycled between bitter clashes with Democrats and state governors over the virus response and high-minded calls for the country to unite and fight back together.

“The American spirit is unyielding, unwavering and unbreakable,“ the president said this week. “It is incredible. I have never seen anything like it, the way — the way the people have pulled together, the unity of this country.“

And he predicted a dramatic rebound later this year, before his electoral fate is determined, supported by a fourth aid package to support the coronavirus response. “I think we are going to have a tremendous rebound and there’s a great energy and a great pent-up demand and as you know ‘phase three’ was terrific and ‘phase four’ if that happens will be great,“ Trump predicted.

There are significant hurdles to making Trump’s rebound scenario occur. Anthony Fauci, director of the National Institute of Allergy and Infectious Diseases, said Thursday that the federal government should impose a nationwide stay-at-home order to help prevent the spread of the coronavirus. That could help on the health front but would cause even more near-term economic pain.

And as of now there is little agreement in Congress on what exactly a phase four federal relief package would look like. Trump wants $ 2 trillion in infrastructure spending. Senator Mitch McConnell has said he wants to wait to see the impact of Phase 3 before considering a new package. And Democrats led by House Speaker Nancy Pelosi have a long list of demands including more aid for states, localities and individuals that Republicans may oppose.

The brutal numbers expected in coming months could rally Washington to come up with another big, bipartisan rescue package. But by then it may be too late to boost Trump’s electoral prospects.

“If economists and the markets see a light at the end of the tunnel this fall, maybe Trump has a chance,” said Valliere. “But much will depend on whether we’ll get a quick recovery, and that’s far from certain. A more likely scenario is a modest, halting recovery that may not accelerate until early next year. But that would be too late for Trump.”