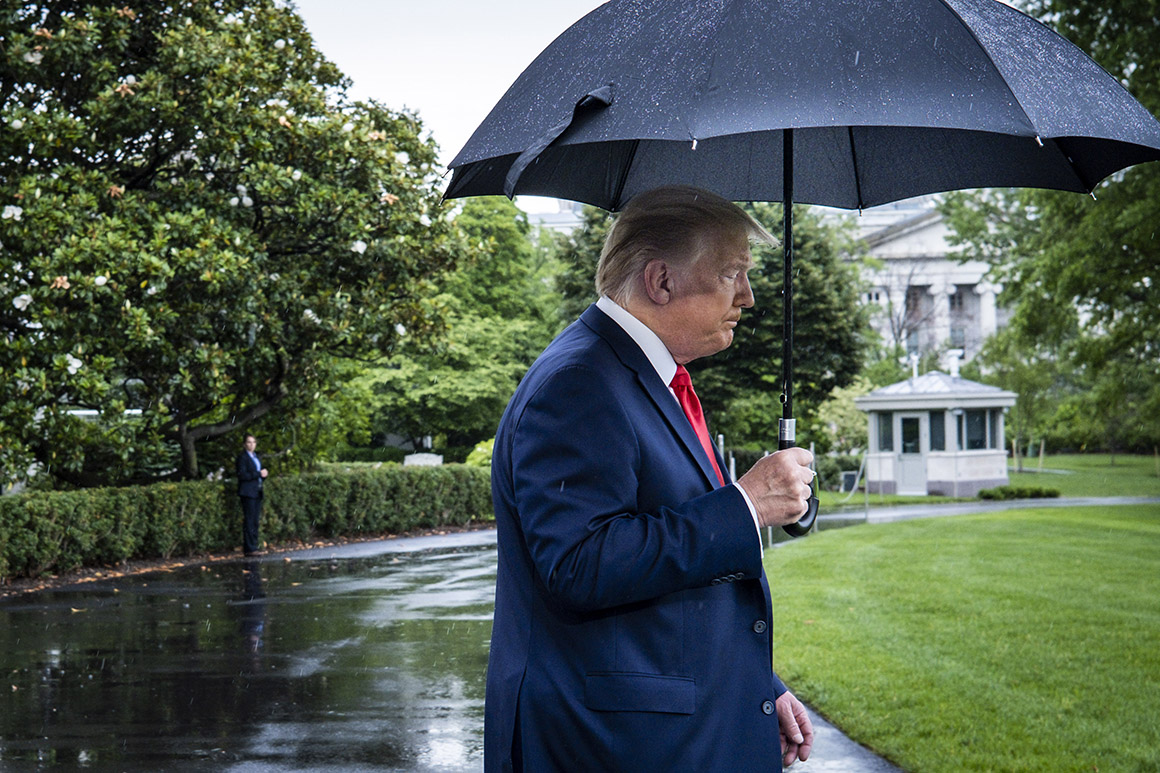 Simply put, Biden has more money and fewer restrictions on how he can spend it at the most critical moment of the presidential election, with tens of millions of people already voting.

The wide fundraising disparity is translating into a significant spending gap favoring Biden. Trump has cut back his TV ad reservations in key states and is being vastly outspent in other battlegrounds, a turn of events that would have seemed unlikely at best in March, when had a nine-figure cash edge over Biden as the former vice president emerged from a contested Democratic primary.

It’s the state that sealed Trump’s victory in 2016. Now it could spell the end of his presidency. POLITICO’s Holly Otterbein breaks down where things stand in the fight for Pennsylvania.

Certainly, Trump pulled off a victory in 2016 despite being outraised and outspent by Hillary Clinton. But the dire financial picture is worrying many Republican strategists, who argue a sitting incumbent should be better positioned and that the lack of money compounds the president’s polling deficit and his struggles with the coronavirus pandemic.

“The obstacles to victory are mounting and the clock is ticking,” said Ken Spain, a Republican consultant. “It will likely take a political earthquake to change the trajectory of this race.”

Here are the top things we learned from Biden and Trump’s latest campaign finance disclosures.

Biden is spending more money and has more left to spend

Biden’s campaign raised $ 282 million in September to Trump’s $ 81 million, not only building up more cash in reserve but sending his spending into overdrive, outstripping Trump.

On TV ads in September, Biden outspent Trump more than 2-to-1, $ 173 million to $ 69 million, according to Advertising Analytics, a media tracking firm.

The spending disparity looks even worse in the three Great Lakes states Trump flipped to win the White House in 2016, where the president is now getting drowned out on TV. In Pennsylvania and Wisconsin, Biden outspent Trump by more than 4-to-1 last month. The disparity was little better in Michigan, where Biden spent $ 15.3 million to Trump’s $ 4 million.

The future advertising picture looks similarly dire for Trump, heading into the final two-week stretch of the campaign. Biden is has reserved $ 63.8 million in TV ads across 20 states, while Trump has booked $ 31.9 million, and the deficit could get worse as the campaigns adjust their ad buys. Trump has been regularly canceling prebooked ad buys in Ohio, Iowa, New Hampshire and other states in the days before they are set to air.

Trump has gotten some cover on TV from a constellation of super PACs, who have filled in gaps for him. Preserve America, a pro-Trump super PAC largely funded by megadonors Sheldon and Miriam Adelson, dumped $ 53.8 million into TV spots and more on digital ads, shoring up Trump in handful of states.

Eighty percent of Trump’s campaign spending in September — more than $ 100 million, out of a total of $ 125 million — was channeled through American Made Media Consultants LLC, a company that FEC filings describe as responsible for making and placing TV and digital ads for the campaign.

But FEC filings do not shed any more light on how that money was spent, as AMMC is not required to disclose its subcontractors. That means few public details on how Trump’s spending habits have changed in recent months. Trump’s filings in August also showed three-quarters of the cash he spent going through AMMC.

The group is the subject of a finance complaint for allegedly acting as a “pass-through” entity to obscure campaign disbursements, filed by the Campaign Legal Center. But Trump’s campaign has insisted that it is in full compliance with campaign finance law.

The original pro-Biden super PAC withers while another surges

Democratic super PACs experienced a real changing of the guard in September.

Unite the Country, the pro-Biden super PAC that buoyed Biden’s primary campaign when it looked like the former vice president might not make it, reported raising $ 4.7 million in September —not nothing, but far below the upper echelon of super PACs like Priorities USA Action, which raised $ 46.7 million (including $ 18.4 million from Mike Bloomberg) to back Biden in September. The Pro-Trump America First Action raised $ 43 million.

But those long-tenured groups were surpassed in September by a new power player fueled largely by Silicon Valley money. Future Forward, or FF PAC, reported raising $ 66 million from the beginning of September through Oct. 14, which it has used to suddenly become one of the top spenders on the airwaves in the final month of the election. (Recode first reported some of the details surrounding Future Forward.)

Dustin Moskovitz, a Facebook co-founder, gave the group nearly $ 21 million in that timeframe, and the super PAC took in significant funding from its nonprofit arm, Future Forward USA Action, which is not required to disclose its donors.

Even as Trump’s campaign is outpaced by Biden in fundraising and in the polls, Republican megadonors aren’t leaving the president to fend for himself. America First Action was buoyed by major donations from Ike Perlmutter, the longtime chairman of Marvel Entertainment, and his wife, Laura Perlmutter, who collectively gave $ 21 million. Timothy Mellon also gave $ 10 million, and the group turned around to spend tens of millions on TV and digital advertising.

The cash that never came

Back in early September, Trump weighed spending as much as $ 100 million of his own money on his reelection bid, according to Bloomberg News. When asked by reporters if he planned to self-fund part of his run, Trump said, “If I have to, I would.”

But the money has not materialized. Trump has contributed just over $ 8,000 to his campaign this election cycle, according to FEC data. It’s a huge difference from 2016, when Trump contributed $ 66 million of his own money to his first presidential bid.

For comparison, rapper Kanye West loaned his quixotic campaign $ 3 million in September and contributed an additional $ 2.1 million this month, according to the latest FEC filings. West, who tweeted he’d be joining the presidential race in July, has now floated his campaign close to $ 12 million since he’s launched his bid and is qualified to be on the ballot in a dozen states as a third-party candidate.