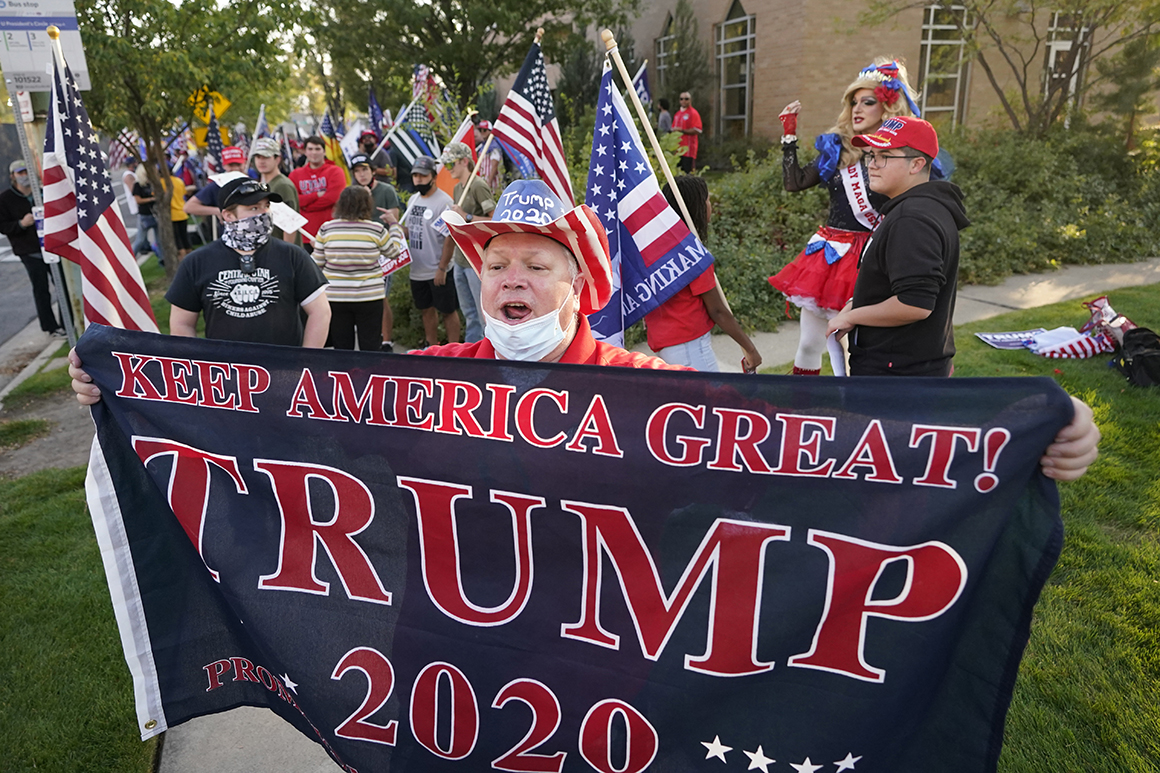 Meanwhile, Trump’s flurry of activity was being received differently across much of the rest of the country.

Some, including House Speaker Nancy Pelosi, wondered whether his whiplash tweet storms — which came after an extended social media lull — were fueled by the steroids he was receiving for coronavirus. Several Republican lawmakers questioned his back-and-forth moves on coronavirus relief talks. Medical specialists fretted that he was misleading the public about the coronavirus yet again. The legal community expressed renewed fears that a president was ordering up arrests.

The bifurcated response is just the latest example of how the Trump diktats and boasts that many find confusing or worrisome are actually well-calibrated to an important slice of the populace. And it’s a phenomenon that has become more pronounced since Trump contracted coronavirus. The heightened adulation — at times an almost deification — has been matched by Trump’s willingness to return the love. Trump introduced himself as “your favorite president” in his first video message after leaving the hospital. And since then, his only public appearances have been three interviews on his favorite Fox News shows and essentially co-hosting Rush Limbaugh’s radio show for two hours on Friday.

“I personally think Trump’s going to lose by a lot,” said Walsh, now a radio host. “But I think his loyal, loyal base will go down in the ship with him. They are clinging to him. I mean, clinging.”

And Trump is reinforcing the bond.

“Keep up the genius,” Trump said on Limbaugh’s show when asked about his message to supporters. “They’re genius. They get it better than the guys that are looking at this stuff.”

Throughout his presidency, the Trump base has never seriously wavered in its support of him. But in recent days, that backing seems to have been turbocharged by Trump’s fight with Covid-19, a disease that’s killed more than 210,000 Americans.

Trump’s illness raised the prospect that the president would be waylaid for the remainder of the election, forcing him to end the signature rallies Trump had been holding in defiance of pandemic guidelines. And the coronavirus outbreak within the White House has resonated in the polls: Biden’s lead over Trump has grown, both nationwide and in swing states, and the majority of Americans said the president had not taken the proper precautions to protect himself from infection.

And when Trump came out of the hospital and tried to take over the coronavirus relief negotiations, some Republicans and typical conservative allies were open with their frustration. Fox News host Brian Kilmeade fumed that Trump’s back-and-forth tactics had “cost people a lot of money” and pushed the stock market temporarily down. And when Trump faced criticism over his administration’s coronavirus protocols, Senate Majority Leader Mitch McConnell seemingly agreed about the concerns, saying he no longer went to the White House because “their approach to how to handle this was different than mine.”

But to his base, it was all the best parts of Trump’s personality — belligerence, “Art of the Deal”-style brinkmanship, vigorous health — pumped full of steroids.

Lee Stranahan, a former Breitbart reporter who now hosts a populist show on Sputnik Radio, a Russian-owned network, said that as long as he meets these core demands — bashing the media, Democrats and progressives — everything else is forgiven, whether it’s rattled stock markets or sick White House employees.

“They don’t see anything that doesn’t seem like Trump,” he said.

To his base, Stranahan added, every Trump move — no matter how seemingly inexplicable to the public at large — has an underlying rationale.

“‘They’re like, ‘We don’t want to see a virtual debate; that suggestion only benefits Biden,’” he said. “And so it doesn’t seem erratic. It seems logical.”

And the logic is frequently tied to the animus of Democrats and the media.

“The general feeling, among people for Trump, is that the media was really on a death watch” when the president contracted coronavirus,” Stranahan said. “They really didn’t want him to get well.”

And the campaign has kept cashing in on that sentiment this week, continuing to flout pandemic best practices.

Donald Trump Jr. held a crowded indoor event in Florida, while several people who attended the coronavirus-laden White House ceremony for Amy Coney Barrett have been traveling across the country instead of quarantining, taking maskless photos with high-profile Republicans along the way.

And Trump himself is bulldozing right back into campaign mode. On Saturday, he’ll address hundreds of supporters on the South Lawn of the White House, talking “law and order” before an audience pulled together by conservative pundit Candace Owens, who is encouraging Black Americans to leave the Democratic Party. Then, on Monday, he’ll head to Sanford, Fla., for his first official post-Covid MAGA rally.

While Trump’s physician, Sean Conley, has given Trump a provisional green light to restart events starting Saturday — the 10-day mark from his diagnosis — it’s unclear whether Trump is no longer contagious.

The one element that Walsh said might lose Trump a few diehard supporters in this period is the sheer exhaustion of following him. To the rest, however, it’s all just Trump being Trump.

“He punches the media still,” he said. “And they love that he calls out people who they think are bad, too. He still gives them enough every day and every week that feeds them, that they stay with it.”

And while the past week has featured a higher concentration of Trump than normal, the fundamental impulses haven’t changed.

In that sense, Stranahan noted, MAGA world is on steroids, just like Trump has been during his Covid convalescence. And steroids, he said, “make you feel good.”