By Rachel Roubein and Susannah Luthi 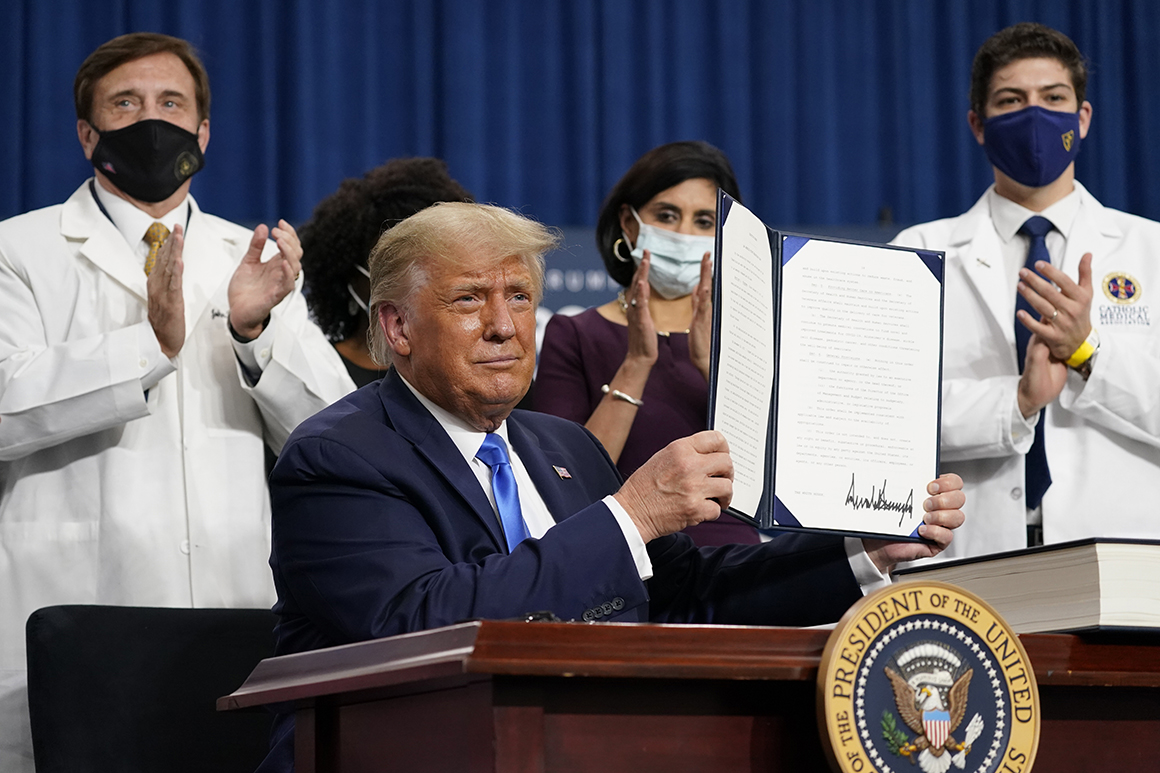 It’s not the first time that a president has tested his power ahead of an election to make a sweeping health care change.

Barack Obama bypassed Congress to reward top-performing private Medicare plans ahead of his re-election campaign. The plan to provide bonus payments sparked Republican-led congressional investigations, and watchdogs at the Government Accountability Office called on the Obama administration to shut it down. The program ended in 2014.

With congressional action on drug prices stalled, Trump has sought to wield executive power to deliver on his pledge to lower costs ahead of Election Day. The drug coupon announcement was just one of a series of recent executive actions on drug pricing that his administration previously considered. Others included a plan to tie Medicare payments to cheaper prices paid abroad and to provide drug discounts directly to seniors. However, neither is expected to have an immediate impact on prices.

The Trump administration two years ago explored the idea of allowing pharmaceutical companies to offer discount cards to help seniors with their prescription drug costs, but noted that it would have to carve out a safe harbor from federal anti-kickback statutes to make the plan work. Officials this summer broached the possibility of drug companies paying for $ 100 discount cards ahead of the election as part of broader efforts to control drug expenses but were rebuffed by industry officials.

Then, Trump unexpectedly revived the idea during a Thursday health care speech in Charlotte, N.C., catching the drug industry and health care interest groups off guard and putting his aides on the hook to answer legal and logistical questions.

On a call with reporters Friday, federal health officials repeatedly said that more details would be forthcoming, and that the cards would “go out as soon as mechanically possible,” while noting they wouldn’t all be distributed by Election Day.

Much of the focus is on a Medicare program called the 402 demonstration that’s used to test innovations that could save money or improve the quality of care. But health policy experts say a move on this scale is unprecedented and may exceed the scope of Medicare law.

“What’s the rationale for considering a cash payment to Medicare beneficiaries a demonstration? What are they testing?” asked Juliette Cubanski, a deputy director at the Kaiser Family Foundation.

“Politics impact the legality of this, when it’s used for such a transparently electioneering purpose as this,” Fishman said.

“They would tell us zero,” said one Democratic congressional staffer on the call. “I got dumber from participating in the call.”

After Trump’s Thursday speech, two White House officials told POLITICO that the cost of the cards would be offset by a plan tie the price Medicare pays for certain drugs to lower prices paid in other countries. But on a Friday press call, a senior HHS official said details of how to pay for the plan “are still yet to come,” and promised more out of the White House “in the near future.”

The confusion has left congressional Democrats unsure what legal grounds they can use to stop the move. It’s not clear who would sue over potential misuse of an obscure Medicare law, Fishman said.

Zachary Brennan contributed to this report.

How can I boost my energy? Five ways to fight tiredness

By Everyone feels tired from time to time and there are many causes of tiredness. Exhaustion could be down to psychological, physical, or lifestyle causes....
Read more
Health

By Unlike the conventional PCR tests – which cost at least £45 each – this means that no lab is required and they can be...
Read more
Health

By The "sunshine vitamin" grew in popularity more than any other vitamin supplement between June 2019 and July this year, market research expert Mintel said....
Read more
Health

Asthma: How to exercise safely if it’s a trigger for your health condition

By Ninety percent of people with asthma report symptoms during exercise, as stated by Asthma UK. Considering it's the key to longevity and wards off...
Read more
Health

Flu jab: How long does it take for immunity against the virus to develop?

By Flu symptoms The flu can cause a range of symptoms, which can be mild or severe – usually improving within a week. Symptoms include: fever, headache,...
Read more
Health

Coronavirus UK: ‘Delirium’ is a key coronavirus symptom in older people – how to spot it

By “Early in the pandemic, we noticed that many frail, older patients with COVID were suffering from delirium, but there was very little data to...
Read more