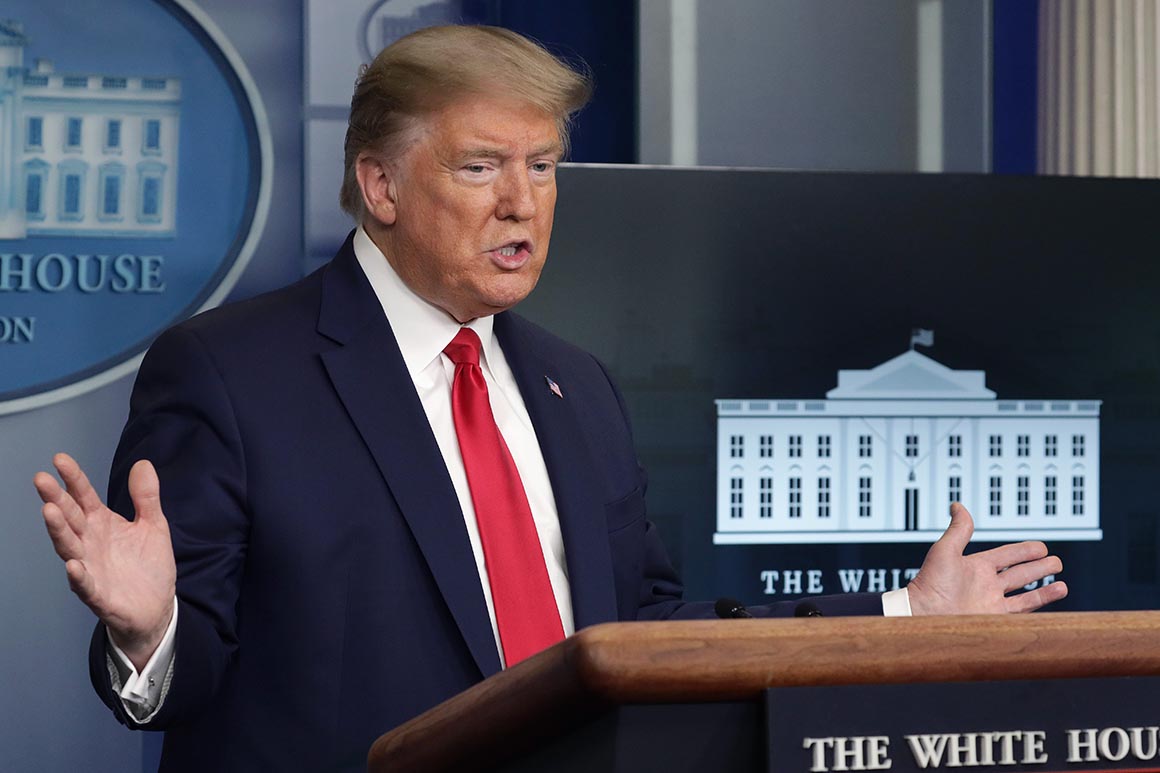 A day before President Donald Trump promised to unveil his latest task force — one devoted to reopening the economy as soon as possible — the White House was still scrambling to fortify its membership, identify its leadership and even outline the precise purpose of the group.

Trump had promoted his “Opening Our Country Council” as a teleconference-based task force that will include “great business leaders” and “great doctors” advising on how to restart the economy from its coronavirus shutdown.

By Monday afternoon, the White House still had not articulated who within the administration would lead the group and how it would differ from existing infrastructure such as the National Economic Council, which coordinates economic policy across the administration. Officials were assessing how the body could even include outside executives or doctors because that could run afoul of federal rules about engaging private-sector interests in critical government discussions. Business groups were also wary of publicly aligning themselves with the White House during a controversial crisis.

Even the exact mission seemed unclear.

“I don’t know if this is a dual mission that includes the logistics of opening up the government like when, where and how. Those decisions are way beyond the pay grade of economists,” said Stephen Moore, an informal economic adviser to the White House dating back to the 2016 campaign. “Or, if the council will have the other mission of figuring out what policies you put in place to get the economy juiced once it does re-open. I believe it will have both missions.”

The council could become an opportunity for Trump to separate public health concerns, which have taken priority during the coronavirus crisis, from economic concerns, which are high on the minds of the president, many of his top aides and conservatives outside his administration. The new council also allows Trump to create internal competition for the best ideas and approaches as he weighs his decision on when and how to restart the economy.

The new economic council will be forced to grapple with daunting challenges as the White House tries to determine how to safely advise Americans to return to work and schools without further spreading the coronavirus — without any vaccine or enough testing for every American. Much of the work on figuring out the logistics of re-opening the economy has instead fallen to governors and private businesses.

For now, the council is expected to include White House chief of staff Mark Meadows, National Economic Council Director Larry Kudlow, Treasury Secretary Steven Mnuchin and Vice President Mike Pence, who is not expected to play a leading role. The former head of the White House’s Council of Economic Advisers, Kevin Hassett, who is now advising the White House on economic issues, is also expected to participate in the discussions.

Trump said Monday night that neither of his family members serving in top White House roles, son-in-law Jared Kushner and daughter Ivanka Trump, would be part of the new economic council.

The roster of potential names has changed repeatedly over the last week, and Trump allies and advisers have floated their own recommendations publicly. Fox News personality Sean Hannity nudged the White House on air to appoint Art Laffer, the supply-side economist close to Trump, while other advisers have urged officials to include Stephen Schwarzman, the chairman and CEO of Blackstone who has his own relationship with the president.

Laffer told POLITICO on Monday he had not heard from anyone at the White House about the group. And several lobbyists throughout Washington had not heard which, if any, companies would participate in the council. Some lobbyists had been urging CEOs to steer clear of joining the group, given concerns about whether its profile would be high enough for Fortune 500 executives. Other business leaders did not want to attract attention to their companies by joining the council during a national health emergency, after Trump went after 3M and General Motors by name in recent weeks.

Mnuchin said at the White House briefing on Monday that the president would additionally receive advice from over 100 business executives. Those leaders’ names were being reviewed Monday but they had not been invited yet, he said.

The president said suggestions on reopening the economy would come from a number of committees such as those representing transportation, manufacturing and faith leaders.

“We have some of the biggest from every business on this. We are setting up different councils or committees, I guess you could call them. We’ve a lot of smart people. I think they will give us some good advice, but we want to be very, very safe,” Trump said. At the same briefing, Trump said he would make a decision on reopening the economy and put out new guidelines by the end of the week.

The confusion and uncertainty surrounding this second council — and now its associated committees — illustrates the White House’s challenge throughout its response to the once-in-a-lifetime global pandemic. Few officials internally are ever certain who is in charge — or taking responsibility for a particular issue even as aides work long hours to bolster the administration’s efforts.

As recently as two weeks ago, five different individuals or groups of aides were working on questions surrounding the supply chain alone.

Trump for weeks has been torn between the advice of his health officials, who have urged far greater caution given the risk of mounting deaths, and the suggestions of his economic aides, who are eager to revive the economy and stock market during a reelection year.

By creating a second council, the White House is essentially giving structure to its ongoing tug of war between the health and economic aides: two wildly divergent viewpoints housed in two separate councils or task forces within the administration.

Donors and Trump supporters are expected to line up to applaud the president for drawing advice from so many different people.

“The more voices President Trump hears from, the better,” said Dan Eberhart, an energy executive and Trump donor. “Big industry and the financial sector are important to the economy and they have the president’s ear. There’s nothing wrong with that — they employee millions. But there’s a lot of other sectors of the economy that are important.”

“Whether it is manufacturing, heavy industry or small Main Street businesses, we need them all to come back for a healthy economy,” he said. “The CEO gets the soft leather chair, but he’s not always the wisest person in the room.”

The White House office said on Monday Trump would allow science to guide his thinking on re-opening the economy. But aides, over the weekend, could not point to any specific benchmarks the administration intended to use to make its decision to relax its guidelines on social distancing.

“President Trump’s policies took this economy to record-setting historic highs for all Americans, but this unforeseen, unprecedented crisis has hurt many workers and businesses. The President wants to see this economy open again so people can get back to work, but scientific data will drive the timeline on those decisions because his number one priority is to protect the safety and well-being of the American people,” Judd Deere, the deputy White House press secretary, said in a statement.