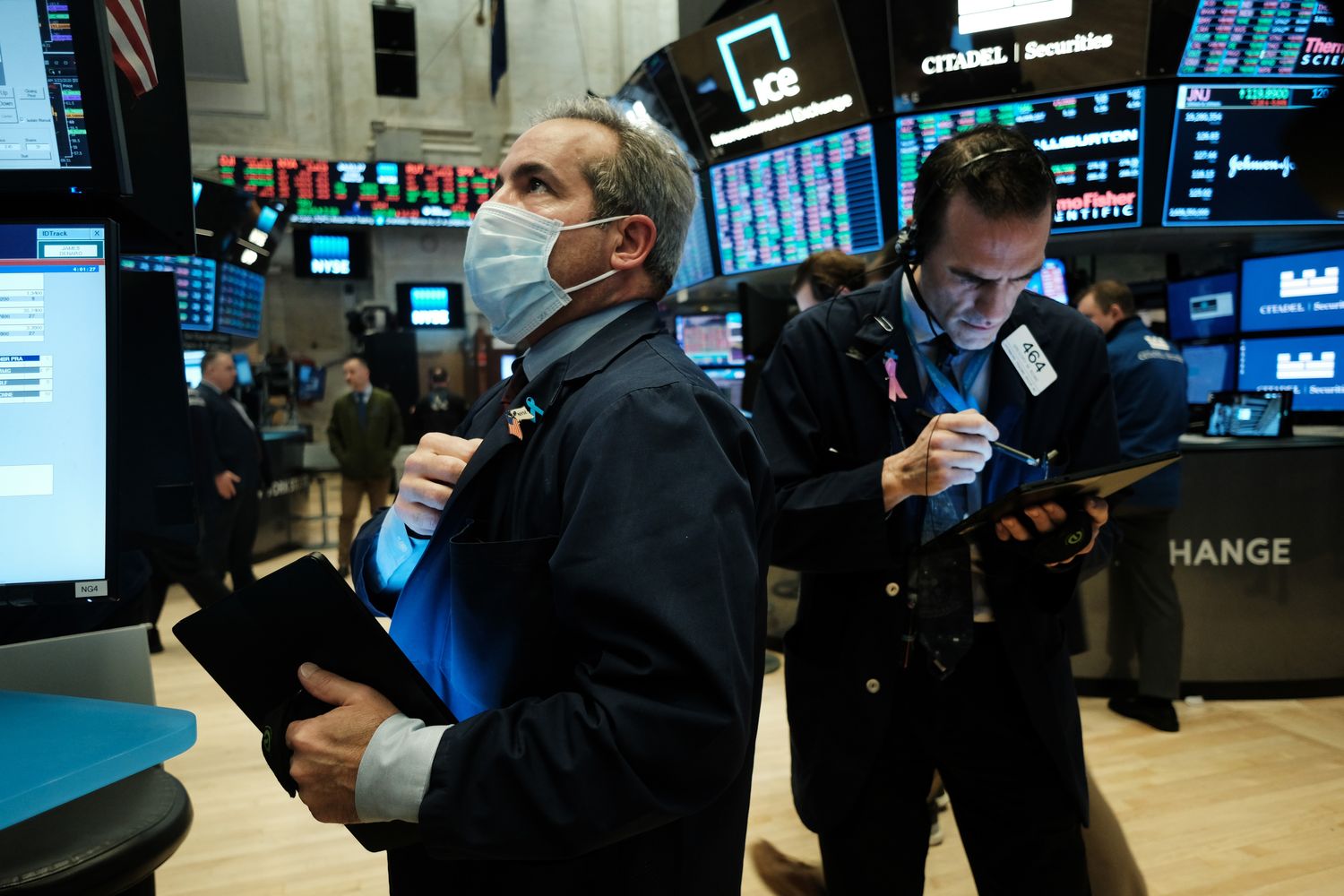 The stock market is defying coronavirus gravity and President Donald Trump is promising a “tremendous rebound” in the economy in the second half of the year.

But investors could be in for another shock as Covid-19 continues to kill Americans and devastate the private sector. A parade of companies, including some of the nation’s largest profit machines, are reporting lower profits or warning that earnings could struggle in the coming months as consumers stay cautious and businesses assume the crash position. Many other CEOs are simply throwing up their hands and offering a giant shrug.

“Companies have no idea what is going to happen whatsoever,” said Ed Yardeni, president of Yardeni Research Inc. “I’m an optimist. I had a happy childhood. But you have to be a realist here that there are going to be after-shocks and no V-shaped recovery. Plenty of companies — especially retail, hotels, restaurants and airlines — would be happy to get 50 percent of their peak business back a year from now.”

The list of companies either warning about future profits or pulling their earnings guidance altogether features some iconic names — such as Amazon and Apple — that have driven the remarkable rally since markets bottomed out on March 23. And the warnings are spread across a broad swath of American industries from retail and restaurants to apparel, food and energy. As of mid-April, according to JPMorgan analysts, 86 of the S&P 500 index companies had suspended earnings guidance – and the numbers continue to grow.

The warnings about profit drops and rising worries about the impact of the coronavirus crisis on the economy suggest that stock prices — one of Trump’s favorite metrics of his success — could be due for another round of trouble. That’s because the eventual economic recovery could take significantly longer than some optimists, including a reelection-focused president, are predicting.

Even if states are able to gradually reopen in the coming months while avoiding fresh virus outbreaks — a difficult task, as many are already finding — a wide range of companies will face new costs while trying to operate safely. That alone may make them less likely to quickly rehire the 30 million or so workers laid off or furloughed since the crisis forced nationwide shutdowns in March.

Companies may also decide that the remote working experience taught them they don’t need as many employees as they thought, putting further pressure on a jobless rate that is expected to hit close to 20 percent on Friday with the April jobs report. That risk, along with unprecedented uncertainty over their sales, suggests the job market won’t take off like a rocket.

“You are going to see a lot businesses, large and small, rethink what the size of their workforce really needs to be after this,” one Wall Street CEO told POLITICO on condition that he not be named in order to speak freely about multiple recent calls with clients worried about how to reopen and how many workers to bring back.

All of this suggests a long and slow slog back from the depths of the coronavirus downturn rather than the quick snap-back Trump and several of his top advisers have heralded. Even Warren Buffett, one of the world’s wealthiest people and perhaps the most famous buy-the-dip investor in American history, who gobbled up bank stocks during the 2008 financial crisis, is sitting this one out for now.

His holding company, Berkshire Hathaway Inc., dumped all its airline shares due to worries about the length of the industry downturn ahead. And Buffett told his loyal investor base over the weekend that he wasn’t buying stocks right now because he could not find anything “that attractive.” Other investors also express significant caution, following Buffett’s lead.

“Importantly, as Warren Buffett remarked, no one has a clue of the trajectory of growth,” said Douglas Kass of the investment firm Seabreeze Partners. “That is one of the two reasons he is hoarding cash. Warren loves the game and is opportunistic, but this time he has more concerns.”

Even the coronavirus “winners” are facing some significant headwinds.

Amazon, one of the stars of the recent market bounce, is seeing revenues surge during the crisis as online ordering by homebound Americans skyrockets. But virus-related costs are soaring even faster. The online retailing giant on Friday said that $ 4 billion in coronavirus-related costs could lead to a loss of up to $ 1.5 billion in the second quarter, which would be its first such decline in five years.

The costs — $ 600 million already in the first quarter and $ 4 billion or more in the second quarter — “include productivity headwinds in our facilities as we provide for social distancing and allow for the ramp up of new employees,” chief financial officer Brian Olsavsky told investors last week.

Overall, according to FactSet, with a little over half of S&P 500 companies reporting, earnings growth is down 13.7 percent in the latest quarter, a figure that — if it holds — would mark the biggest decline since the third quarter of 2009 during the financial crisis.

One gauge, the “forward 12-month price to earnings ratio” for the S&P 500, a favorite Wall Street metric to assess if a stock is priced too high versus how much money a company is expected to make, is now over 20, according to FactSet. This easily eclipses the five-year average of 16.7 and the 10-year average of 15.0, according to FactSet. The last time the forward 12-month ratio was above 20.0 was April 2002.

The Federal Reserve is helping boost stock prices by pumping vast sums of cash into the financial system. But even so, some analysts are perplexed at the rise given the scale of the economic damage and the unknown future of the virus.

“If one excludes Connecticut, New Jersey, and New York, the virus cases are still increasing,” said Richard Bernstein of RBAdvisors. “It seems to invite a second wave to ‘re-open the economy’ when case counts in much of the country are still increasing. I don’t understand why equity investors are unconcerned with this.” Bernstein added that “valuation isn’t cheap, but that’s largely because there are no earnings.”

Warnings about the impact of Covid-19 on both corporate profits and the overall economy are dominating earnings calls this month as top executives fret that they are operating with extremely limited information on how and when the economy will fully reopen and what will happen with infection rates when it does.

“We’re modeling a number of downside scenarios,” Columbia Sportswear CEO Timothy Boyle said on the apparel maker’s earnings call last week when the company withdrew its 2020 financial outlook “given the ongoing business disruption and uncertainty surrounding the pandemic.” Net sales at the company dropped 13 percent in the first quarter — a taste of what could be ahead for retailers with a much more devastating second quarter.

At tech giant Apple, CEO Tim Cook told investors it was essentially impossible to know what the economy and profits would look like in the months ahead. “Given the lack of visibility and uncertainty in the near term, we will not be issuing guidance for the coming quarter,” he told investors.

Tex-Mex fast food chain El Pollo Loco also said it couldn’t predict future performance given the coronavirus uncertainty. CEO Bernard Acoca expressed fears to investors about what the economy will look like given the staggered and limited re-openings.

“How do we need to adapt and adjust in this new world? We hope that dining will come back strong, but no one has a crystal ball to know how quickly that will occur or not occur,” he said.

Tapestry Inc., a luxury accessories and branded lifestyle product company, also declined to provide investors with future guidance while warning of a long slog ahead.

“We never before experienced a time when 90 percent of our store fleet was either closed or had shortened operating hours,” CEO Jide J. Zeitlin said on the company’s earnings call last week. “It’s clear that the crisis will have an impact lasting beyond a quarter or two.”

News from earnings season is not entirely grim, however.

Mark Zuckerberg, CEO of social networking giant Facebook, pledged that the company would hire 10,000 people in product and engineering this year. But even Facebook declined to offer guidance and Zuckerberg injected a note of caution about the future. “I remain very concerned that this health emergency and, therefore, the economic fallout, will last longer than people are currently anticipating,” he said.

Zuckerberg added that Facebook plans to “moderate some areas of our expense growth especially in business functions.” Facebook CFO David Wehner said that “with the Covid-19 crisis, like all companies, we are facing a period of unprecedented uncertainty in our business outlook.” He added that business performance “will be impacted by issues beyond our control.”

That feeling of lack of control and uncertainty over the future of the economy pervades corporate suites and Wall Street.

“Personally, I don’t know how one could be very bullish or very bearish right now,” said Bernstein. “There is no precedent to guide you. It’s all guesswork.”