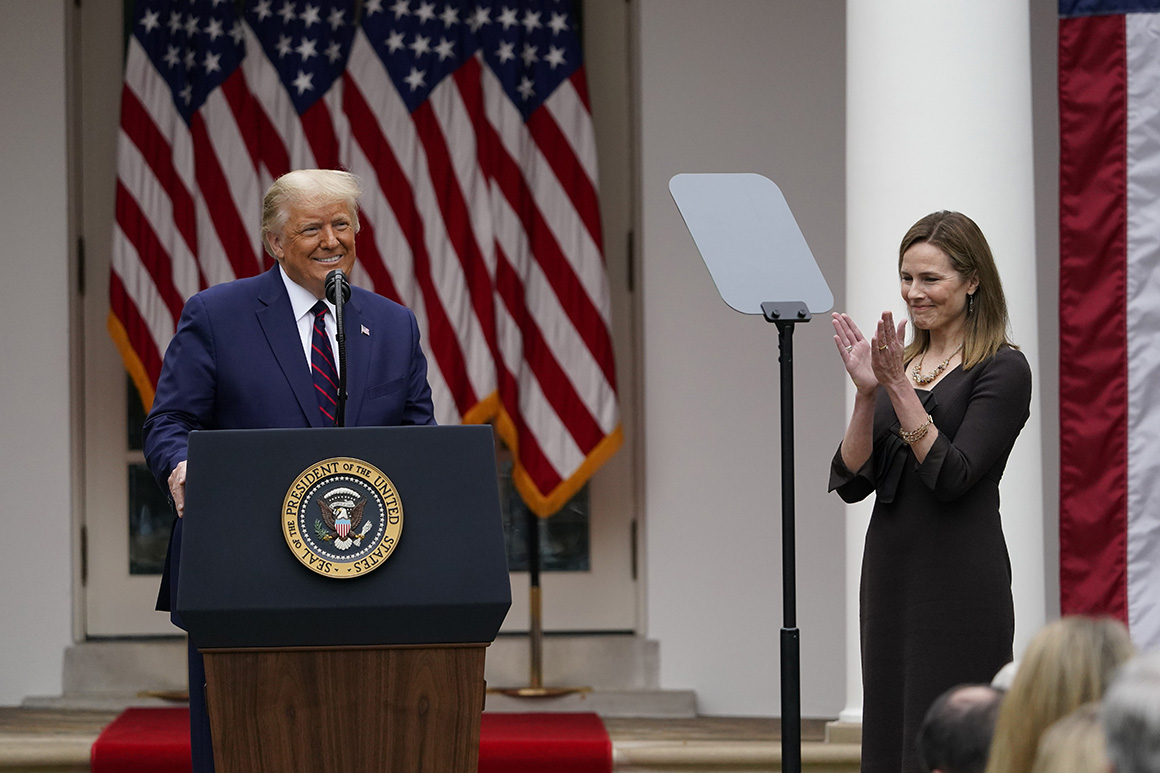 With his selection of Judge Amy Coney Barrett to fill a vacancy on the Supreme Court Saturday, Trump has made his third nomination to the high court in just under four years. If Barrett is confirmed, Trump will have nominated the most justices on the court in one term since President Richard Nixon. She would join Trump’s other appointments, Neil Gorsuch and Brett Kavanaugh, to form a 6-3 conservative majority.

It’s a fact Trump is likely to love. He’s known to obsess over legacy — both eroding that of his predecessor, President Barack Obama, and establishing his own. With the Supreme Court, he’s just happened to be able to achieve both. At a White House Rose Garden ceremony introducing Barrett on Saturday, Trump appeared to relish that piece of his legacy as he stood alongside Barrett, gazing out on hundreds of invited guests. American flags were positioned along the colonnade.

“This is my third such nomination,” he said, “and it is a very proud moment indeed.”

Presidential historian Douglas Brinkley said that with the Barrett nomination, the reshaping of the Supreme Court joins two other events that have already defined his first term: his impeachment and his sluggish response to the coronavirus. And since Trump hasn’t faced a major foreign policy crisis — unlike many other presidents — those issues are even more prominent.

“There’s no question that three Supreme Court justices is Donald Trump’s most tangible accomplishment,” Brinkley said. “These are appointments that will change the future of America for decades to come. It’s going to be indisputable.”

Barrett, who has served on the 7th U.S. Circuit Court of Appeals since late 2017, would replace a liberal icon, Justice Ruth Bader Ginsburg, who died last week.

Carrie Severino, president of the Judicial Crisis Network, a conservative advocacy group that has worked closely with the administration on judicial appointments, said Trump has “arguably done more than any president in memory to restore constitutionalism to the court.”

Democrats acknowledged the seismic shift that is poised to come to the court. When Trump entered office, the court was ideologically split down the middle, after Senate Majority Leader Mitch McConnell blocked Obama’s nominee — who would have ensured a progressive majority — during his final year in office.

“Everything hangs in the balance with this nomination,” House Speaker Nancy Pelosi said in a statement. She ticked off a laundry list of issues central to progressives: “A woman’s constitutional right to make her own medical decisions about her own body, the right of LGBTQ Americans to marry who they love, the right of workers to organize and collectively bargain for fair wages, the future of our planet and environmental protections, voting rights and the right of every American to have a voice in our democracy.”

Trump is pushing the Republican-controlled Senate to swiftly confirm Barrett before Election Day, hoping to energize a presidential reelection campaign that has struggled in a year ravaged by a recession and pandemic. Lagging far behind Democratic nominee Joe Biden in both national and battleground states, he hopes the Supreme Court will help bring skeptical social conservatives into his camp.

In a call Saturday night after the announcement, Trump campaign leaders stressed to staffers how important the nomination was to the race, citing 2016 exit polls that show three out of four conservatives naming the Supreme Court as one of their top priorities. Campaign officials said they planned to use the nomination in mailers and in scripts to be used to persuade voters at doors and on phones.

“This is big,” Trump campaign political director Chris Carr said on a recording of the call obtained by POLITICO. “This is big for our voters and our base and we’re going to capitalize on that.’’

That plan was visible just hours later. Trump flew to a rally in Pennsylvania, where the campaign had erected a massive digital banner that read: “FILL THAT SEAT.” The phrase has even become a chant at recent Trump rallies.

Trump frequently boasts about the hundreds of federal judges, including Gorsuch and Kavanaugh, that have been confirmed during his tenure, even if he often inflates the total number.

He has appointed roughly a quarter of all active federal judges in the country and more federal appeals court judges than any recent president at the same point in a first term.

The Senate Judiciary Committee expects to hold a confirmation hearing for Barrett the week of Oct. 12. Both Trump and some Republican senators have said the Supreme Court needs to have all nine justices on the court ahead of the election, in case they need to step in to decide the result.

In 2016, the Republican-led Senate refused to hold a vote on Obama’s nominee for a vacancy, Merrick Garland, claiming it was because it was an election year. This time around, McConnell has vowed to hold a vote on Trump’s nominee, arguing it’s different this time because the White House and Senate are controlled by the same party.

“With the appointment of a Justice Barrett as his third Supreme Court pick, President Trump will transform the 5-4 John Roberts court to the 6-3 Clarence Thomas court,” said Mike Davis, who worked on the Gorsuch and Kavanaugh confirmations as a Senate Republican staffer and now is president of the Article III Project, a group pushing to confirm Trump’s judicial nominees.