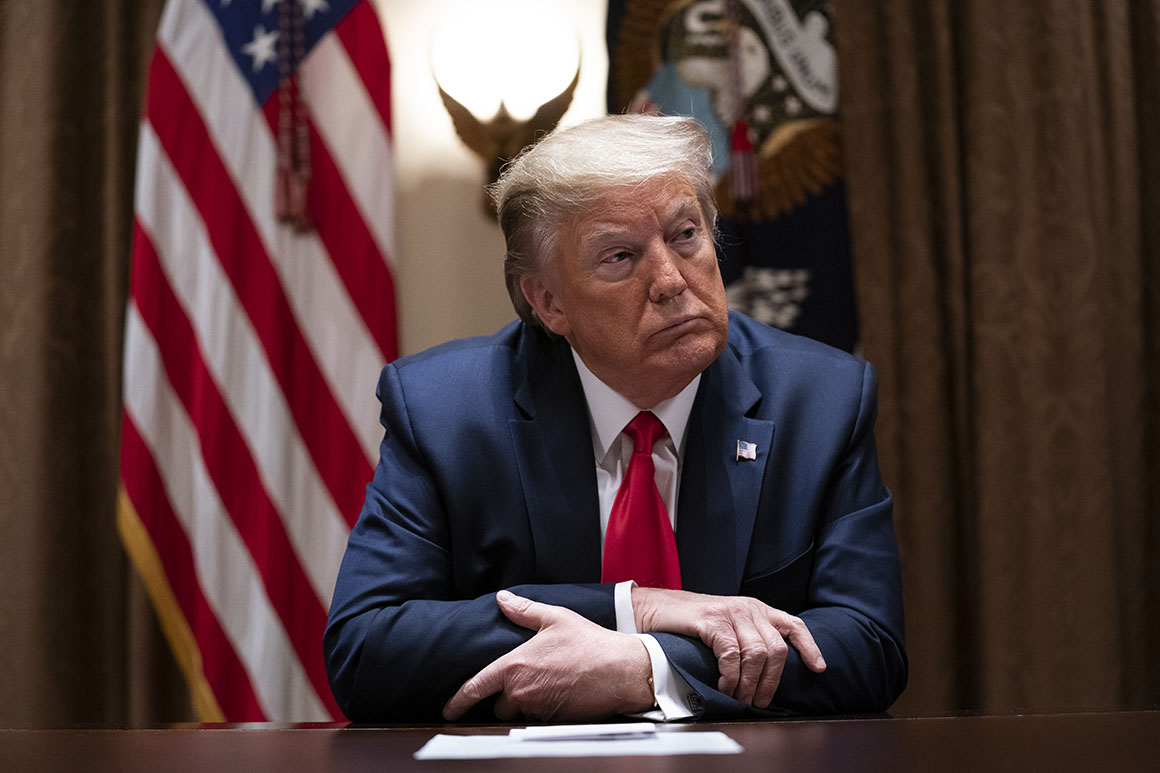 President Donald Trump’s coronavirus fight has turned an administration that spent years trying to shrink the nation’s safety net into the driving force behind a sudden expansion of government involvement in American health care.

The Trump administration is already pumping hundreds of billions of dollars into a key health sector that it previously vowed to rein in, expanding Medicare benefits and boosting payments to state Medicaid programs by an estimated $ 50 billion, while promising to directly pay for coronavirus treatment for thousands of uninsured in what some experts say mirrors a single-payer system.

By the time the virus finally recedes, some health policy analysts predict, Trump will have overseen historic new levels of federal health spending.

It’s a crisis response that has cast aside a decade of Republican orthodoxy and many of the administration’s original health care goals, in realization that Trump’s health care legacy — and reelection — could hinge on the fate of the next few months.

“President Trump is probably now overseeing one of the biggest expansions in government health spending in one year ever,” said Larry Levitt, the executive vice president for health policy at the Kaiser Family Foundation.

That trajectory has sent ripples of anxiety through parts of the conservative health care establishment even amid a national emergency, over worries that a Trump era once seen as the gateway to smaller government could end up further entrenching the nation’s massive federal health programs.

"There’s an institutionalization effect," said Thomas Miller, a resident fellow at the conservative American Enterprise Institute. "Once you get to a certain point, it’s very hard to go backwards."

“That’s why you can’t screw up if you actually believe in stuff like smaller government,” Miller added. “All of the sudden, the stops and locks on the door are all gone.”

The administration’s effort to boost the nation’s pandemic defense marks just the latest version of a health care agenda that’s played a central, if ever-shifting role in Trump’s presidency.

Trump paved his way to the White House by harnessing years of conservative rage over Obamacare, vowing to make his administration’s first priority a repeal of the landmark health law. That effort collapsed over the inability to develop a suitable replacement option — wasting months and helping cost the GOP full control of Congress.

Since then, the administration has sought to cobble together a range of initiatives aimed at slashing drug prices, promoting new alternatives to Obamacare and clamping down on federal health spending. Few major proposals have panned out. Several other priorities — like guidance allowing states to tie Medicaid benefits to employment, and an attempt to force hospitals to disclose their prices — remain in legal limbo.

Trump has nonetheless remained fixated on health care — asserting at one point that he would restore the GOP as the “party of health care” even as polls showed voters increasingly trusted Democrats more on the issue. And up until earlier this year, administration officials had begun to coalesce around a campaign narrative that cast Trump as a champion of greater “choice and competition” in health care, based on a combination of conservative measures elevating free-market insurance options and populist broadsides against drug companies and hospitals over rising prices.

“In the long run, I think what they’ve done will be consequential and important,” said Lanhee Chen, a former adviser to Mitt Romney and Marco Rubio’s presidential campaigns, who credited the administration with prioritizing long-time conservative goals. “That matters even if actual policy change is much longer in coming.”

Yet the strategy born out of those three-plus years of work has since been swamped by a three-month coronavirus crisis that’s plunged the nation into full-scale health and economic emergencies — and forced the administration to overhaul its approach toward the health system.

“We continue to have the same principles at stake: We’re not opposed to spending money, we’re opposed to wasting it,” said a senior administration official, who argued the White House is doing what’s necessary to meet the moment. “I wouldn’t want to pretend that it’s free money. It’s not. But the frame of reference is what’s going on out there.”

Over the last few weeks, the Trump administration has greenlighted legislation that sends $ 100 billion in aid to frontline providers — including hospitals that administration officials have fought with for months over plans to tighten pay rates and require more financial transparency.

It separately authorized billions more in loans to cash-strapped hospitals and doctors through the Medicare program. And after years spent trying to curb federal spending on Medicaid through divisive policies encouraging states to impose work requirements and cap their funding, the administration is now surging money to the program to bolster safety-net care.

The new Medicaid spending is estimated to total $ 50 billion over the next couple years — a figure that could soon be dwarfed by Congress’ next round of injections into a health care system still scrambling to catch up with the fast-spreading virus. The program for low-income Americans is also likely to balloon on its own amid record unemployment, with one projection estimating as many as 23 million people could join the Medicaid rolls over the next several months.

While Trump’s allies acknowledge the vast spending increase, they also maintain that the administration has used the coronavirus crisis as an opening to push through some long-sought deregulatory actions. Those include a sweeping expansion of Medicare coverage for telehealth services — backed by policy experts in both parties — that makes it easier for people to get care virtually or over the phone, and a broad loosening of regulations that previously prevented physicians from practicing across state lines or restricted the types of care nurses and physician assistants could provide.

“We’ve expanded it dramatically,” the senior administration official said of the broader telehealth coverage, predicting it would ultimately prove difficult to rescind. “It’s one of those things that once we get the hell out of the way, the marketplace will take off.”

Trump notably has also yet to abandon one mainstay of his health agenda: Ardent opposition to Obamacare, which he’s still seeking to eliminate through a lawsuit filed by several GOP-led states.

“What we want to do is terminate it,” Trump said in March.

The White House subsequently opted against reopening Obamacare’s insurance marketplaces as jobless numbers grew and the virus spread. Yet that has only forced the administration to create a brand-new program to cover the cost of treating uninsured coronavirus patients.

It’s a concept that both Republicans and Democrats alike note is essentially a narrow single-payer system, with the federal government directly paying hospitals for care.

“One could look at the plan as kind of a skinny Medicare for all who have Covid-19,” Levitt said, adding that it’s “certainly ironic given the criticism of ‘Medicare for All’ from President Trump and other administration officials.”

The senior administration official disputed that characterization, calling it needed compensation for hospitals on the condition they won’t stick patients with “surprise” medical bills — and noted that there are already concerns the federal funding will be insufficient.

“They’re already complaining it’s not enough, so there’s no way to run the whole system on single payer,” the official said. “If anything, it’s going to show that single payer doesn’t really work, but I’m happy that people who are uninsured are going to be able to go get the care they need.”

Still, the run of free spending has dismayed some conservatives, who say the rush to expand government by the administration and congressional Republicans has been jarring – even if necessary in some cases in response to a fast-developing crisis.

The Trump era had already undermined efforts to arrest federal spending, with the deficit on track to surpass $ 1 trillion even before the outbreak. But the coronavirus fight opened up additional hefty funding streams that will be hard to cut off, especially as the threat of the disease lingers for months.

“When this crisis is over, that funding needs to be pulled back,” said Jason Pye, the vice president of legislative affairs for the conservative advocacy group FreedomWorks. “We’re putting ourselves in a very awkward position.”

Perhaps more significantly, the period could elevate the parts of the health care industry that Trump’s populist rhetoric has targeted for years. Ambitious efforts to shed light on hospitals’ opaque prices have been overshadowed by their crucial role as first responders. And a centerpiece pledge to crack down on the pharmaceutical industry over soaring drug costs remains unfulfilled, as the administration relies on it to develop the treatments that could lead the way out of the nation’s weeks-long halt.

“These are the new heroes,” Miller said. “In the near term, we’ll lionize them.”

The Trump administration is drawing a different lesson from the last several weeks, the senior administration official said, emphasizing the distinction between encouraging companies working to help improve the nation’s health system and cracking down on those trying to take advantage of it.

“I’m much more comfortable with where we are on drug pricing" than a Democratic Party that’s sought to rein in the entire industry, the official said, calling Trump’s stance a combination of "pro innovation and trying to take out bad incentives."

To critics of the administration, though, the scramble to bulk up federal programs in response to the pandemic is just the latest example of a health agenda defined less by concrete policy goals than the president’s ever-changing political instincts.

Trump is still trying to wipe out Obamacare even as he relies on its sweeping architecture of health benefits and programs, said Linda Blumberg, a fellow in the Health Policy Center at the nonpartisan Urban Institute. He’s refused to reopen private insurance enrollment, in favor of having the government directly fund care. And as Trump speeds toward November, he’s increasingly caught between the health care vision he’d planned to run on — and the one that’s needed now.

“He really is acting out of two different objectives that are working against each other,” Blumberg said, referring to the policy goal of reining in health care spending and the political necessity of expanding it. “You can’t square it.”